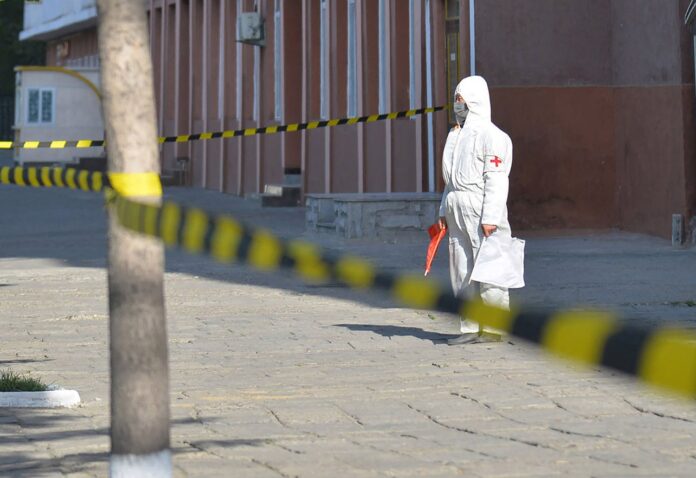 North Korean authorities have locked down the capital city of Pyongyang due to ‘rising’ cases of an unspecified respiratory illness according to media reports citing a central government notice, and sources confirmed to Radio Free Asia that multiple people in the city have tested positive for COVID-19.

News of the lockdown began to surface on Wednesday morning with Seoul-based NK News and the Russian embassy in Pyongyang reporting that according to the notice, residents would not be allowed to leave their homes for five days.

A source in the northwestern province of North Pyongan, who regularly communicates with residents of the capital, told RFA’s Korean Service on Wednesday that the virus is definitely COVID-19, several cases have been confirmed, and the lockdown also limits access to the city until Jan. 31.

“There have been confirmed cases of COVID-19 in Pyongyang,” he said. “An acquaintance in Pyongyang told me that the reason that the Central Quarantine Command imposed a lockdown in Pyongyang was an emergency measure for an epidemic.

Another source, an official from a trading agency in Pyongyang who was visiting the northwestern border city of Sinuiju, said that the lockdown started on Wednesday and will last until Jan. 31 due to “confirmed cases of COVID-19,” meaning people have tested positive for the virus even though authorities are not acknowledging it.

“I will not be able to return to Pyongyang for a while,” he said on condition of anonymity to speak freely.

“In early January there was a confirmed case on Tongil Street in Pyongyang’s Rakrang district, where all the distribution warehouses of all the trading companies are concentrated.” he said. “My co-worker has also been confirmed [positive] with COVID-19.”

RFA was not able to independently verify either claim. Since the beginning of the pandemic, North Korea has been very secretive about the coronavirus situation, even telling the rest of the world that it was completely virus free for the first two years of the pandemic.

The government acknowledged the virus in May 2022, but kept track of cases of “fever” that totaled close to 5 million, and did not report confirmed case totals to international health organizations.

The apparent outbreak comes a few weeks after North Korea opened up its border to China after a long closure due to the pandemic, allowing goods to be traded across the border.

“We don’t know exactly how many confirmed cases of COVID-19 have been confirmed in Pyongyang,” the second source said. “The quarantine authorities have blocked the operation of public service facilities such as restaurants and public baths in downtown Pyongyang. Considering this measure, the spread of the COVID-19 must be serious.”

It wasn’t entirely clear what restrictions the lockdown entailed, but the source said it extended to marketplaces and businesses in each district of Pyongyang unless they are run by state organizations.

The second source said the authorities had been reporting that “acute respiratory diseases and the flu” have been spreading in the capital, so they intensified disinfection efforts and there were talks of lockdown in the works.

“It was only after the Lunar New Year [on Jan. 22] that they decided to go ahead and lock it down and restrict all access to the city,” he said.

Although the quarantine authorities do not publicly announce the number of confirmed COVID-19 cases in Pyongyang, the people diagnosed with the “respiratory disease” are isolated in a hospital outside the city and treated with drugs, such as antibiotics imported from China, according to the second source.

COVID-19 is a virus, and antibiotics, which are used to treat bacterial illnesses, have no effect on it.

According to the NK News report, residents were ordered to stay in their homes until Jan. 29 and check and report their temperature several times per day.