Rep. Tiffany to Introduce Resolution Calling for US to Recognize Taiwan Independence 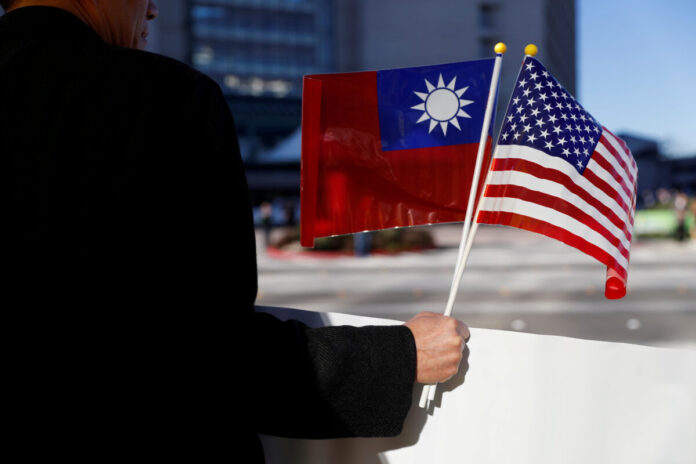 A group of Congressional lawmakers is set to introduce a measure urging the U.S. administration to end its “One China Policy” and formally recognize Taiwan’s status as an independent nation.

Rep. Tom Tiffany (R-Wis.) will lead 18 other members of Congress in introducing the resolution later this week, which calls for the United States to resume formal diplomatic relations with Taiwan.

The resolution also directs the Biden administration to support Taiwan’s membership in international organizations and to negotiate a bilateral U.S.-Taiwan Free Trade Agreement.

“It’s time to change the status quo and recognize the reality denied by the United States government for decades: Taiwan is an independent Nation,” Tiffany said in a statement shared with The Epoch Times.

“As our long-standing and valued partner, correctly acknowledging their independence from Communist China is long overdue.”

The Chinese Communist Party (CCP), which rules China as a single-party state, claims that Taiwan is part of China and must be united with the mainland by any means necessary. The regime has refused to rule out military conquest to achieve this goal and on several occasions has threatened war over the issue.

Despite such threats, the CCP has never controlled Taiwan, which boasts its own democratic government and market economy.

The United States has maintained a so-called One-China Policy since 1979, in which it recognizes the Chinese regime as the sole entity governing China. Washington also maintains the Taiwan Relations Act, which guarantees that it will provide Taiwan with the arms necessary for its self-defense.

Washington’s agreements with the CCP, however, have prevented it from formally recognizing Taipei in diplomatic and trade bodies, even though Taiwan is the United States’ tenth-largest trading partner.

It is a situation that Tiffany hopes to rectify.

“Taiwan has been put on the same footing … as North Korea and other recalcitrant countries like that,” Tiffany said during a Jan. 25 interview with “Capitol Report” on NTD, a sister media outlet of The Epoch Times.

“They’ve expanded their democracy and are truly a peace-loving, free country here on planet Earth. And I think they should be recognized as such.”

The idea is not new to Tiffany, who brought forward similar resolutions in 2020 and 2021. What is new, he said, is the support that the resolution is receiving.

“A couple years ago, it was me alone,” Tiffany said. “This year we’re going to have 18 original co-sponsors.”

“There’s more and more people in Congress that are understanding how important Taiwan is, and how important it is that we recognize Taiwan, and that we trade with Taiwan.”

One co-sponsor, Michelle Steel, has also been named to the new House Select Committee on Strategic Competition between the United States and the Chinese Communist Party, which may help deliver bipartisan support to the resolution.

In all, Tiffany’s resolution aims to rectify what it considers an out-of-date set of foreign policies, which no longer reflect either Taiwan or China’s place in the world, or their relationships with the United States.

“The President should abandon the antiquated ‘One China Policy’ in favor of a policy that recognizes the objective reality that Taiwan is an independent country not governed by or included within the territory of the People’s Republic of China,” the resolution states, using the official name of communist China.

Indeed, the context of trilateral relations between China, Taiwan, and the United States has shifted dramatically in the near half-century since it was formulated. Apart from Taiwan’s embrace of democracy and its thriving market economy, there is also the issue that most Taiwanese now consider themselves something distinct from China and its people.

A 2020 Pew poll found that 66 percent of Taiwanese considered themselves to be a distinct people from the Chinese, with 28 percent considering themselves both Taiwanese and Chinese, and only 4 percent viewing themselves as just Chinese.

That trend is sharply higher among the younger generation, with 83 percent of Taiwanese people under 30 saying that they did not consider themselves to be Chinese.

Likewise, a late 2021 poll by Taiwan’s Mainland Affairs Council, which handles cross-strait relations, found that only 1.6 percent of Taiwanese supported unification with China.

For Tiffany, the times have changed, and it is past time that the United States adapts its foreign policy to reflect the realities of the current era.

“The world has undergone dramatic changes since the days of Richard Nixon and Jimmy Carter, and it’s time that U.S. policy reflected that fact,” Tiffany said in a statement.

“Taiwan is a free, democratic, and independent country—one that has never been under the control of the People’s Republic of China or part of its territory. Any suggestion to the contrary is simply a lie.”