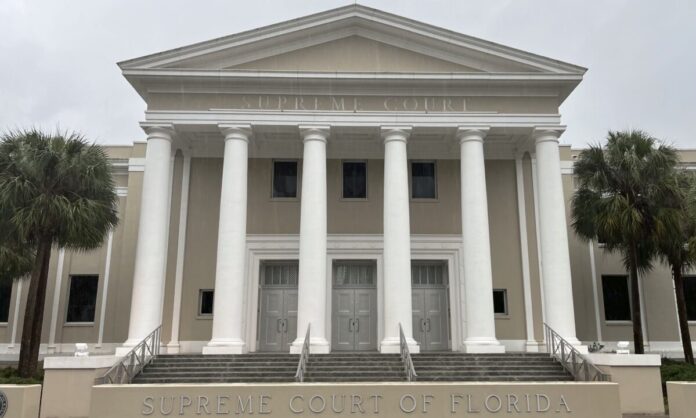 The Florida Supreme Court on Jan. 23 agreed to hear Planned Parenthood’s lawsuit attempting to overturn the state’s 15-week abortion limit but declined to stay the law while the case is pending.

Four justices voted against the stay; one, dissenting, voted for it.

The Reducing Fetal and Infant Mortality Law, which Gov. Ron DeSantis signed in April 2022, provides exceptions, including saving the mother’s life, preventing severe and irreversible impairment, and if a not-yet-viable child has a “fatal fetal abnormality.” The law, which amended existing abortion law, also mandates reporting on the use of abortion-inducing drugs and if human trafficking is given as a reason for the abortion.

Planned Parenthood and other abortion advocates sued on June 1, arguing the law violated privacy rights contained in the state constitution.

“The issue with the right of privacy amendment to the Florida Constitution is not what it says, but rather what it doesn’t say,” Mark Minck, the state chairman of Protect Human Life Florida, said in an email to The Epoch Times. The organization is gathering signatures to put the Human Life Protection Amendment on the ballot in Florida.

“So, while the Florida Supreme Court wrangles over whether it includes the right to intentionally end another human life, we’ll continue our effort to place clear and unambiguous language in our state’s governing document. Language that recognizes that the right to life of the preborn is God-given, thus unalienable, and shall not be infringed at any state of development.”

The Supreme Court’s action came a day after abortion supporters rallied in Tallahassee to mark the 50th anniversary of Roe v. Wade, the 1973 U.S. Supreme Court decision that found a constitutional right to abortion. The current Court overturned the decision in June in the Dobbs v. Jackson Women’s Health Organization case.

The decision raised abortion’s profile as an election issue, as Democrats used it to rally their supporters. Meanwhile, with the issue given back to the states by the Dobbs decision, various states began toughening or revising abortion laws.

Vice President Kamala Harris, who spoke at the pro-abortion rally, sparked a flurry of controversy over what she omitted from an allusion to the Declaration of Independence:

“We are here together because we collectively believe and know America is a promise. America is a promise. It is a promise of freedom and liberty. Not for some, but for all. A promise we made in the Declaration of Independence, that we are each endowed with the right to liberty and the pursuit of happiness. Be clear: these rights were not bestowed upon us. They belong to us as Americans.”

“As Governor DeSantis said,” his spokesman Bryan Griffin said on Jan. 24, “we are better when everybody counts. The Florida Supreme Court denied both of Planned Parenthood’s emergency motions asking the Court to block Florida’s law from taking effect. The Court also accepted jurisdiction of the case and set a briefing schedule. From here, we will continue to defend our pro-life protections.”

“The Declaration of Independence enumerates three unalienable rights: life, liberty, and the pursuit of happiness—and we stand for all of them.”

The words’ three’, ‘life’ and “all’ were emphasized in boldface in the press release.

Reps. Dan Crenshaw (R-Texas), Lauren Boebert (R-Colo.), and Lisa McClain (R-Mich.) all chided Harris for the omission in posts on Twitter, as did the account of the Republican National Committee.

The founder of the Conservative Family Research Council went a little further, wondering if Harris’ gaffe was unintentional or deliberate and noting she also omitted “the Creator” from her quote.

The Declaration’s text in question, in its second paragraph, reads: “We hold these truths to be self-evident, that all men are created equal, that they are endowed by their Creator with certain unalienable Rights, that among these are Life, Liberty and the pursuit of Happiness.”

Planned Parenthood’s media office did not respond to an email from The Epoch Times seeking a response about the vice president’s remarks.

Harris spoke to about 2,000 people Sunday at The Moon nightclub in Tallahassee, with another thousand outside who couldn’t get in. Sunday marked the 50th anniversary of the Jan. 22, 1973, Roe v. Wade decision.