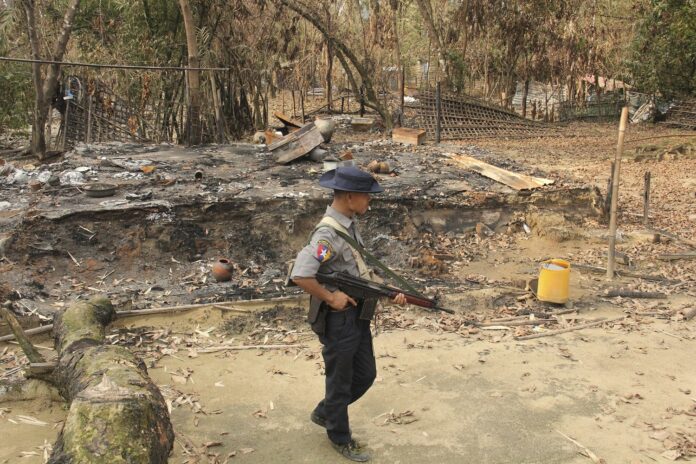 The 215-page complaint, with more than 1,000 pages of annexes, was filed on Jan. 20 under the principle of “universal jurisdiction” and calls for an investigation and prosecution of individuals responsible for genocide, war crimes and crimes against humanity.

A brutal military offensive in their home state of Rakhine from 2016 to 2017 drove some 740,000 people across the border to Bangladesh, where they remain in squalid refugee camps.

The complaint also calls for accountability for atrocity crimes committed by the junta against various other groups in the nearly two years since the military seized power in a February 2021 coup.

Matthew Smith, chief executive officer for Fortify Rights, said that the objective of the complaint is for German authorities to initiate an investigation, collect and preserve evidence for future cases, and ultimately issue arrest warrants for those responsible.

“In the event that happens, things such as extradition to Germany become very real,” Smith said Tuesday during an event held at the Foreign Correspondents’ Club of Thailand in Bangkok by Fortify Rights to announce the filing of its complaint.

“Of course, there are a lot of unknowns at this moment, but certainly this will send a message to members of the Myanmar military junta and others that are responsible for crimes in Myanmar that they’re not safe,” he said. “They’re not safe to travel in our world.”

Fortify Rights’ complaint is the latest international effort to hold the junta accountable for atrocity crimes. Others include cases at the International Criminal Court, the International Court of Justice, and a universal jurisdiction case in Argentina for crimes committed against the Rohingya – all brought in 2019.

However, Fortify Rights said its filing would not duplicate any of the efforts currently underway and would add to what it called “mounting evidence” of the junta’s crimes. The ongoing efforts either fail to encompass the scope of crimes alleged in the new filing or would not hold individuals criminally accountable for atrocity crimes, it said.

“German authorities are well-placed to fill present gaps left by the currently pending accountability mechanisms,” the group said in a statement.

There are more than 100 investigations into universal jurisdiction cases currently underway in Germany, suggesting that the prosecutor may be willing to take up the complaint, although a timeline for the process remains unclear.

Universal jurisdiction is a legal principle enabling a state to prosecute individuals responsible for mass atrocity crimes regardless of where they were committed or the nationality of the perpetrator or victims. The principle is typically applied for crimes deemed so severe that they represent offenses against the entire international community.

Investigations by German authorities into international crimes can also potentially be used in prosecutions in venues and jurisdictions outside Germany, Fortify noted.

‘Relief for the suffering of Myanmar’s people’

Of the 16 complainants, nearly half are survivors of military-led “clearance operations” of the Rohingya in Rakhine state in 2016 and 2017, while the other half have survived post-coup atrocities throughout the country in 2021 and 2022.

All survived or witnessed crimes in Myanmar and many have since fled the country.

Together, they allege that the military systematically killed, raped, tortured, imprisoned, disappeared, persecuted, and committed other acts that amount to genocide, crimes against humanity, and war crimes in violation of German law.

Their complaint includes evidence that senior junta officials exercised responsibility over subordinates who committed crimes, knew about such crimes, and failed to take any action to prevent the crimes and punish the perpetrators.

Fortify Right’s Smith told RFA that German authorities had confirmed receipt of the complaint and said prosecutors are “likely to wait for further developments,” including the submission of additional complaints, until making a determination on whether to proceed with the case.

“This lawsuit is encouraging for our people … It is also a form of relief for the physical and mental suffering of Myanmar’s people who are oppressed, burned to death, robbed, raped, and whose houses were torched and destroyed.”

In July, the ICJ rejected all of Myanmar’s objections to a case brought against it by Gambia that accuses the country of genocide against the Rohingya, clearing the way for the court to move on to the merits phase of the process and consider the factual evidence against Myanmar, a process that could take years.