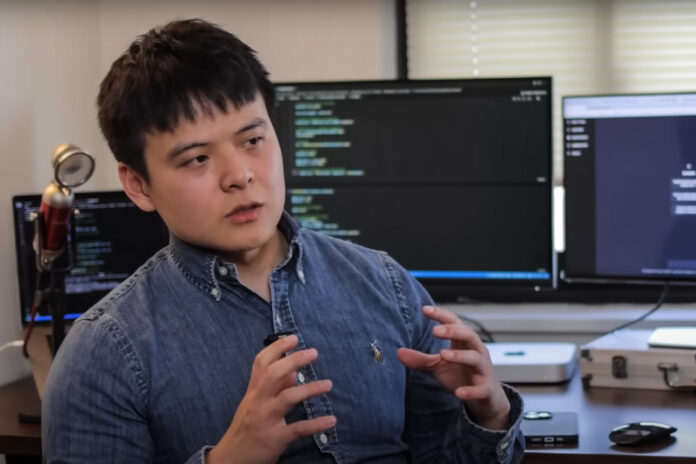 Nearly three years ago, former state TV host Kcriss Li was live streaming his arrest by state security police in the central Chinese city of Wuhan, where he had gone to report as a citizen journalist on the emergence of the pandemic in 2020.

“I’m suddenly being chased down by the state security police. The car they’re driving isn’t a police car,” Li tells the camera after being hassled and obstructed for days by local officials and security guards as he traveled around Wuhan reporting on the epidemic, including the round-the-clock operation of crematoriums in the city.

“They’re chasing me, so I can’t live stream any more. I will just have to leave you with this clip,” Li says in a video shot in February 2022, not long after he tried to film the P4 laboratory at the Wuhan Institute of Virology, which some rumors claimed was the source of the COVID-19 virus.

“It’s hard to describe the feeling I had then, in Wuhan … sometimes I was reminded of a trip I made to North Korea in 2019, staying at the Yanggakdo Hotel, which is a place where foreign tourists stay in Pyongyang,” recalls Li, now a student in Rochester, New York. “We were able to move freely around the hotel, but under a state of total control, so that we felt we could be arrested at any time if we left the hotel.”

“The fear, the threat of existing under the threat of totalitarianism was what I felt most keenly in Wuhan back then,” says Li in an exclusive interview with Radio Free Asia, speaking to the public for the first time since disappearing about two years ago.

But Li, whose story has been written up as a book by exiled writer Liao Yiwu, dismisses the fear of totalitarian power as “tragic,” especially for young people.

“We should be worrying about what kind of practical action we can take, not about the so-called power of those who make the rules,” he says while strolling around a lake near his dormitory.

“Rumors were flying around”

Li, whose Chinese name is Li Zehua, said he was drawn to Wuhan by the disconnect between the official narrative, which claimed the ruling Chinese Communist Party had the newly emerging pandemic under control, and the cries for help from healthcare workers and ordinary people on the ground.

“Frontline medical staff were crying out over the lack of protective equipment, saying patients were dying in large numbers both in and outside of hospitals,” he says. “Rumors were flying around about the Wuhan Institute of Virology.”

At the start, cutting-edge private media like Caixin, Caijing, Freezing Point and Southern Weekend were publishing front-line reporting out of Wuhan. But President Xi Jinping gave a Feb. 3, 2022, speech calling for “the strengthening of public opinion management.”

Citizen journalists had been quick to step into the breach, despite the banning of a number of key blogging platforms including Tencent’s “Daija” in the wake of Xi’s speech.

But their days were numbered too, given the strength of Xi’s directive to control the public narrative.

Citizen journalist Chen Qiushi, one of the first to arrive in the city, suddenly went quiet after interviewing people around the new mega hospitals being thrown up at great speed in Wuhan, with blogger Fang Bin taken away by police just a few days later.

Li managed to hang in there for a few more weeks until his dramatic, live-streamed chase by police on Feb. 26, while lawyer-turned-reporter Zhang Zhan was detained and taken back to Shanghai, where she is reportedly close to death in prison following months of on-off hunger-striking and forced feeding.

Li said his main concern in live streaming the police chase was self-protection.

“I knew that as long as I had a platform, that would give me some protection against a totalitarian power that was trying to hurt me or suffocate me,” he says, although he ended the broadcast with an impassioned plea to China’s young people to “stand up.”

Now, he finds inspiration in November’s anti-lockdown protests across China, in which people held up blank sheets of paper and called on Xi to step down and call elections, or at least to put an end to three years of grueling lockdowns, mass surveillance and compulsory testing under his zero-COVID policy.

“What are they afraid of?”

Li was detained by police in February 2020 and held for two months. He came to the United States in 2021 on a student visa to obtain a masters degree in computer science.

That wasn’t his first brush with authority.

A high-school drop-out from the eastern province of Jiangxi, he narrowly escaped being sent to juvenile detention, winding up instead in the shopping malls of Shenzhen as a computer salesman.

Life in that cosmopolitan trading city brought him into contact with the wider world, and he eventually caught up on his studies and got admitted to the Communication University of China as a trainee anchor.

Li eventually got hired as a host and presenter, and lived the Chinese dream for a while, traveling all over and filming for his food shows.

Now, his existence is reduced to a room in a university dorm in Rochester, New York, with a desk crowded with computer monitors displaying code, or papers on artificial intelligence.

“We have been oppressed by unfreedom for a long time in China,” Li told RFA. “This unfreedom, especially the unfreedom of information, has brought about many other unfreedoms.”

He likens the last three years of the zero-COVID policy, with white-clad enforcers welding people into their apartments or shipping them off to quarantine camps in the middle of the night, to the political turmoil of the 1966-76 Cultural Revolution.

“After I left, things got even worse — the guys in white turned into White Guards,” he says. “Nothing has changed since the Cultural Revolution.”

Asked what he thinks China is, or could become, he pauses for a long while to collect his thoughts.

“I think China could become very diverse,” he says. “It’s precisely because of the lack of tolerance and diversity that any talk of China these days is dominated by leftist nationalism and pointless patriotism.”

“I discovered when I got to the United States that freedom … is the result of diversity, or diversity is the premise of freedom, which was a pretty profound feeling,” he says.

Later, asked who Kcriss Li is now, he struggles to find an answer.

“I’m a learner,” he eventually concludes with a laugh. “I’m a person who is constantly learning, and who keeps discovering that he is nothing.”

But he still plans to keep up the fight against totalitarian rule, which he views as a threat anywhere due to the global spread of technology.

“If a totalitarian regime is using (artificial intelligence) technology to control the people, the people want to fight back. But you don’t even have the chance to know the opponent,” he says. “I think it is necessary to tell how the most backward society abuses the most advanced technology to harm. It makes sense to take, inform, and explain the details to people. I think it is meaningful.”

“I will definitely keep fighting those things that I don’t like, like totalitarianism and tyranny, and fight them in my own way,” he says. “I think more people will join me in future … I’m not alone.”