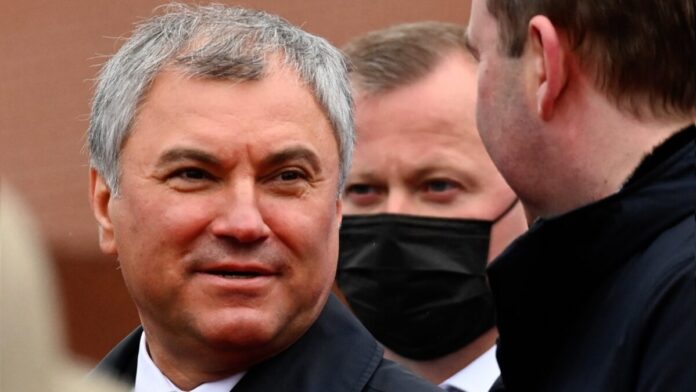 Vyacheslav Volodin, a speaker of the Kremlin’s lower house of parliament, warned on Jan. 22 that sending additional offensive weapons to Ukraine “will lead to a global catastrophe.”

Volodin, 58, claimed that the United States and the North Atlantic Treaty Organization’s (NATO) continued support of Ukraine is pushing the world to a “terrible war,” noting countries that supply Kyiv with powerful weapons are risking their own destruction.

“If Washington and NATO countries supply weapons that will be used to strike civilian cities and attempt to seize our territories, as they threaten, this will lead to retaliatory measures using more powerful weapons,” Volodin said in a post on the Telegram messaging app.

“Arguments that the nuclear powers have not previously used weapons of mass destruction in local conflicts are untenable,” he added. “Because these states did not face a situation where there was a threat to the security of their citizens and the territorial integrity of the country.”

Volodin, a close ally of Russian President Vladimir Putin, has been a speaker of the State Duma, commonly known as the lower house of the Federal Assembly of Russia, since 2016.

The latest nuclear threat comes as Washington and NATO pledged billions of dollars in weapons for Ukraine last week.

On Jan. 19, the Pentagon announced that the United States has authorized a new $2.5 billion aid package for Ukraine that includes 90 Stryker combat vehicles and 59 Bradley fighting vehicles.

The package does not include tanks, which has become a point of contention as Germany has indicated it will not send its own Leopard tanks to Ukraine unless the United States sends the Abrams.

Rep. Michael McCaul (R-Texas) told ABC’s “This Week on Sunday” that the U.S. should send some of its Abrams tanks to Ukraine in the interest of overcoming Germany’s reluctance to share its own.

“If we announced we were giving an Abrams tank, just one, that would unleash” the flow of tanks from Germany, McCaul, the Republican chairman of the House Foreign Affairs Committee, told the network. “What I hear is that Germany’s waiting on us to take the lead.”

Last year, the United States committed about $50 billion in security, financial, and humanitarian aid to Ukraine, according to figures from Kiel Institute for the World Economy, a German research institute. As a single country, the U.S. has pledged the most aid to Kyiv by far.

In comparison, the government that came in second place in 2022 was the United Kingdom, which pledged $7.5 billion to Ukraine, according to the database.

All European countries and institutions combined have recently surpassed U.S. assistance to Ukraine. In December 2022, the EU pledged to help Kyiv financially throughout 2023 with €18 billion ($19.5 billion), which would bring the continent’s total support to just under €52 billion ($56.4 billion).

“Until now, the EU’s support to Ukraine since the start of the war has always lagged behind that of the United States,” Christoph Trebesch, head of the team compiling data for Ukraine Support Tracker who is also the director at the Kiel Institute, said in a statement.

“This has changed in recent weeks, as the total value of EU commitments now exceeds those of the U.S.,” he continued. “The large new EU pledges are a welcome development, given the major role of this war for European security.”

The new package, of which Germany is the biggest contributor, now makes Berlin the largest European donor, overtaking the UK for the first time.

The United States has so far allocated $113 billion in assistance to Ukraine, of which $24.2 billion has been used for security assistance since the Russian invasion on Feb. 24, 2022.

The massive U.S. spending on Ukraine has attracted criticism from some Republicans. Last month, Rep. Thomas Massie (R-Ky.) argued that those funds could have benefited U.S. citizens.

“$100 billion to Ukraine. Let’s put that in perspective. That’s more than $200 million this year from each congressional district,” Massie wrote in a tweet on Dec. 21, 2022. “What could your congressman have done for your district with $200 million? How long will the kids in your district be paying interest on this debt?”

Naveen Athrappully, The Associated Press, and Reuters contributed to this report.