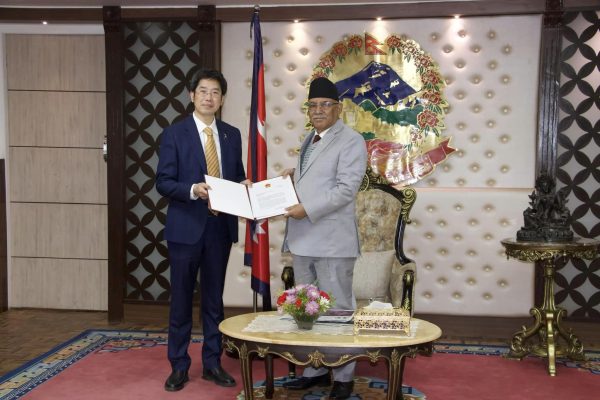 Nepali politics continues to confound observers. Communist Party of Nepal-Maoist Center (CPN-MC) chief Pushpa Kamal Dahal, who was sworn in as prime minister on December 26 despite his party standing third in the recent general elections, received a strong but surprising boost in a trust vote in parliament on January 10 when his former electoral alliance partners, the Sher Bahadur Deuba-led Nepali Congress (NC) and the Madhav Kumar Nepal-led Communist Party of Nepal-United Socialist (CPN-US), voted in support of his new government.

Less than a fortnight ago, Dahal ditched the NC and CPN-US to head a government with support from the Khadga Prasad Sharma Oli-led Communist Party of Nepal-United Marxist Leninist (CPN-UML). NC and CPN-US backed Dahal in the confidence vote despite his last-minute betrayal.

The decision of the NC and CPN-US to support Dahal has become the topic of much discussion in Nepal. Some speculate that Deuba might have supported Dahal in an attempt to secure a share in the spoils of power. Others see Deuba’s move as aimed at driving a wedge between Dahal and Oli. Meanwhile, others see it as a shrewd move by Dahal to minimize Oli’s influence in the ruling coalition. Whatever the reason, it is evident that instrumentalism determines Nepali politics, and that gaining power is the only currency.

The ruling coalition comprises parties with diverse interests and political goals. Its survival and domestic issues will be Prime Minister Dahal’s primary focus. Speeches of leaders in the new parliament focused on domestic issues like good governance, political stability, corruption control, and effective implementation of federalism.

Coalition partners wield considerable leverage in the new government and Oli, who heads the largest party in this coalition, will exercise significant control. He leads the mechanism to support the government and develop a common minimum program for the coalition government. His leverage will increase if the presidency or the house speakership (or both) go to the CPN-UML. Dahal seems to be in for a rough ride.

Meanwhile, several issues on the foreign policy front deserve Dahal’s immediate attention. The need for Nepal to “balance” its engagement with the big powers – India, the U.S., and China – in the context of heightened Sino-Indian and Sino-U.S. competition while maintaining strategic autonomy and sovereignty will be a major challenge. Another is Nepal’s widening trade deficit. Such challenges have intensified in recent times.

Dahal will need to tackle several issues with India. Firstly, he will need to decide on India’s Agnipath scheme. The previous government, of which Dahal’s party was a coalition partner, kicked the Agnipath can down the road for the next government to deal with. The Agnipath scheme provides for short-term recruitment into the Indian Army, which violates the tripartite agreement between Nepal, Great Britain and India regarding the recruitment of Nepali Gurkhas into the Indian and British armies. Last year, such recruitment in Nepal was suspended because Kathmandu was opposed to the short-term recruitment of Nepalis into the Indian Army. The current government does not have the luxury of delaying a decision on the matter as Gurkha recruitment from Nepal, which has been a critical element in Indo-Nepal relations, is in jeopardy.

When Nepali officials raised the issue during the recent Power Summit organized by the Confederation of Indian Industries on grid connectivity in the Bay of Bengal Initiative for Multi-Sectoral Technical and Economic Cooperation (BIMSTEC), Indian officials said that the Baharampur-Bheramara line connecting Nepal to Bangladesh was “fully occupied.” Therefore, the issue will test Dahal’s diplomatic skills.

Thirdly, Nepal has requested that India grant air entry points to facilitate aircraft movement to Bhairahawa and Pokhara. The two airports were built by Chinese companies, though the former was funded by the Asian Development Bank. Without India granting appropriate entry points, airplanes will need to circle in Nepal for a few minutes before landing, increasing operational costs. Kathmandu should engage India at the earliest to ensure the international airports are sustainable for airlines to use.

Fourthly, Dahal needs to continue the “return to normalcy” in India-Nepal relations after its nadir in 2020, when the Oli government amended the Nepali map to include Kalapani, Limpiyadhura, and Lipulekh in the far west – territories also claimed by India.

There are also issues with China that require immediate attention. One is China’s opening of the Kerung border point. This was closed with the outbreak of the COVID-19 pandemic but was reopened after Dahal assumed the premiership recently. There are concerns in Nepal over the reopening of this border point amid the surge in COVID-19 cases in China.

Nepal needs clarity on its position on Global Security Initiative (GSI), a Chinese initiative to counter rival regional blocs such as the Quad. Beijing is keen for Nepal to join the GSI. Although Nepal has clarified its commitment to non-alignment, which would mean Nepal will not join any security pacts with any country, President Bidhya Devi Bhandari joined the GSI meeting last year despite the Deuba-led government’s reservations.

Also, Beijing is impatient to see projects under the Belt and Road Initiative (BRI) take off in Nepal. Days after Dahal’s appointment as prime minister, a Chinese delegation came to Nepal to conduct a feasibility study of the Kathmandu-Kerung railway connectivity. With a friendlier government in power, Beijing would like to see BRI projects make concrete progress.

Whether Dahal makes New Delhi or Beijing the destination of his first foreign visit will be keenly watched. However, it will be pragmatic if he were to pick New Delhi first, ceteris paribus. As much as his visit to Beijing would show that he is attempting to balance between Nepal’s two giant neighbors, which every leader in Nepal professes and which is the official foreign policy, the fact is that Nepal has more issues that require immediate engagement with its southern neighbor.

Kathmandu is abuzz with speculation that New Delhi wanted Deuba, not Dahal, to lead the new government. However, despite New Delhi’s suspicions of Dahal and Dahal’s earlier misgivings regarding New Delhi, Nepal needs healthy relations with India. He might get a warmer welcome in Beijing than in New Delhi. Yet, a visit to New Delhi will show his intent to tackle difficult issues head-on, not shy away from them.

In this context, his decision to make New Delhi the first port of call, likely to be in late February or early March, is a mature decision. He has the experience of engaging India as prime minister and has a host of immediate and enduring issues on his plate. His level of success in resolving those issues will determine his legacy.