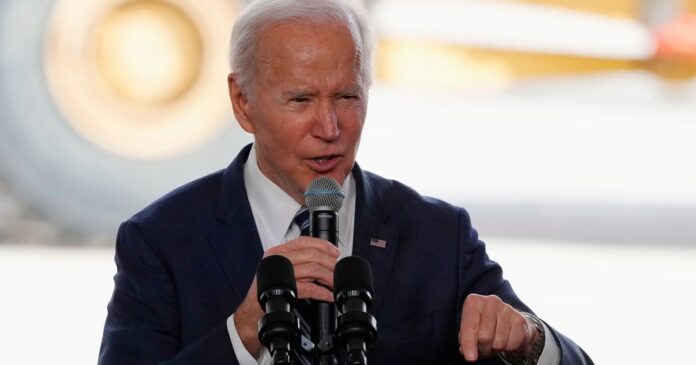 Buildings use nearly half the energy generated in the United States, and produce more than a third of the country’s climate-changing pollution ― even more, if you consider the electricity powering elements like air conditioners, toasters and neon storefront signs.

But the White House is now aiming to set what U.S. Energy Secretary Jennifer Granholm called “a new gold standard for new construction all across America,” unveiling policies to promote electrification and cut fossil fuel use in buildings owned by the federal government.

On Wednesday, the White House’s Council on Environmental Quality announced the country’s first “federal building performance standard”: By 2030, 30% of all federal buildings by square footage will need to bring their emissions from cooking and heating equipment down to zero.

There’s an accompanying coalition to replicate the president’s building standard at the state level, and California said it would be the first to join.

Perhaps even more significant is a newly proposed rule from the Department of Energy that would force the federal government to keep fossil fuel use 90% below 2003 levels in all new buildings that its agencies construct or renovate, starting in 2025. Those buildings would be required to “fully decarbonize” by 2030.

“This new rule is going to have the climate impact of canceling out the pollution from, for example, all the houses in Denver for a year,” Granholm said on a call with reporters Wednesday morning. “So it’ll make the air cleaner, especially for those living near new construction, and it will save taxpayers money to the tune of $8 million per year in building costs.”

But the other purpose, she said, is to “lead by example.”

Those structures make up only a fraction of the U.S.’s roughly 129 million buildings. But the moves offer a signal of where the Biden administration thinks the construction industry should go in the years ahead.

Electric heating, appliances and vehicles are widely considered the best options to replace fossil fuels in residential buildings and passenger transportation in the near future, since supplies of low-carbon fuels that function like natural gas or gasoline are expected ― even in the industry’s own rosy forecasts ― to remain scarce for the next few decades.

The issue boiled over in 2019 when, as it does every three years, the International Code Council convened the municipal governments, environmentalists, builders and utilities that make up its membership to write the latest round of model energy codes for the country.

Few cities have the resources to write their own codes. Even if they did, doing so could cause problems, since builders, lumber suppliers and window manufacturers need uniformity. In the absence of a federal benchmark, all U.S. states (and several countries in Latin America and Asia) enshrine the ICC’s model codes in law, with varying rules about how they’re adopted.

During the code-writing process, all members could weigh in on the proposed changes. But only officials from local governments were allowed to vote on the final version of the model codes. The ICC is privately run, but this approach was meant to lend some democratic legitimacy to the ultimate product.

Yet the past few code cycles had made few improvements on energy saving, increasing efficiency standards by little more than 1% each time. Organizing through sustainability-focused groups like the U.S. Conference of Mayors, municipalities agreed to vote for a model code that required all new buildings to include the circuitry for electric appliances and car chargers and dramatically reduce energy use.

In a 3-to-1 vote, the latest energy code passed with all the electrification measures and efficiency gains of up to 14%.

Industry groups, including the National Association of Home Builders and the American Gas Association, were furious, and asked the ICC’s powerful appeals board to overturn two dozen separate measures. The appeals board granted five, striking the requirements for electrification circuitry from the code. The trade groups also unsuccessfully challenged government officials’ eligibility to vote.

Instead, the industry associations pushed for the ICC to revoke governments’ right to vote on the measures at all. While governments would vote as they always had on building codes for fire exits and swimming pools, the writing process for energy codes would switch to a more bureaucratic “consensus” system that gives companies equal representation to elected officials.

The Biden administration protested, warning the ICC that the change could damage public faith in its codes. The ICC went ahead with it anyway.

Should a president more sympathetic to the gas industry’s concerns succeed Joe Biden, unwinding the Energy Department rule would likely require a formal rule-making process, assuming the proposal is finalized by 2024. But it would really only take effect in 2025, giving opponents ample time to challenge its implementation.

A new administration could easily end the Council on Environmental Quality’s federal buildings standard. Brenda Mallory, the council’s Senate-confirmed chair, stressed that the standard is “not a rule,” and thus does not have the same legal permanence. But she said inertia and practical benefits have helped the federal government’s in-house conservation plans to avoid the partisan hacksaw in the past.

“The plans have had durable effects across administrations,” she said. “We expect that as the work is already underway, that it will take hold.”