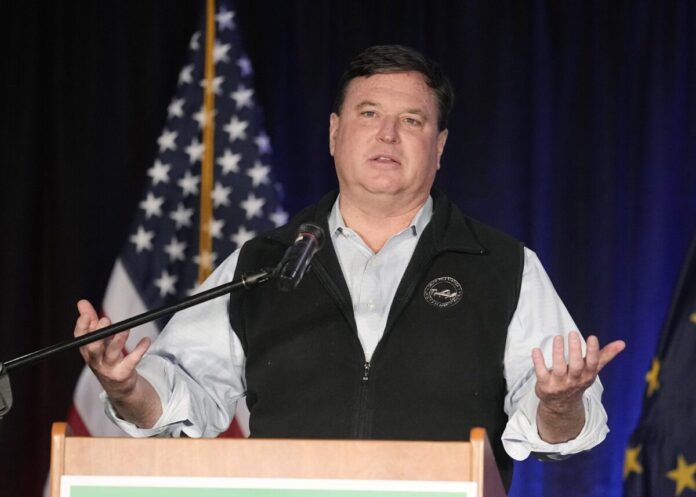 The state of Indiana is suing social media giant TikTok, accusing it of falsely claiming the company’s product was safe for children and illicitly sending U.S.-based users’ data to communist China.

Indiana Attorney General Todd Rokita announced two separate lawsuits against the Chinese-owned TikTok on Dec. 7, both related to what he described as “false claims” made by the company about its app, also called TikTok.

“The TikTok app is a malicious and menacing threat unleashed on unsuspecting Indiana consumers by a Chinese company that knows full well the harms it inflicts on users,” Rokita said in a statement.

“With this pair of lawsuits, we hope to force TikTok to stop its false, deceptive, and misleading practices, which violate Indiana law.”

The first lawsuit alleges that TikTok lured children onto the platform by misrepresenting the amount of sexual content, profanity, and drug references made as “infrequent” when in fact the app is rife with what he described as “extreme examples of such material.”

The lawsuit further alleges that an essential part of TikTok’s business model is presenting the application as safe and appropriate for children ages 13 to 17.

The second lawsuit asserts that TikTok controls massive amounts of highly-sensitive data and personal information about Indiana consumers and deceived those consumers to believe that this information was protected from the Chinee Communist Party (CCP), which rules China as a single-party state.

TikTok has long been subject to accusations that it feeds vital personal information on Americans to the CCP.

The main reason for this is that the company is owned by Beijing-based internet giant ByteDance, which is subject to laws in China requiring the company to share any and all data in its possession with the CCP. TikTok executives have admitted in the past that some Americans’ data was sent to China and also that the company previously censored materials at the request of the CCP.

Such issues have led FBI Director Christopher Wray to claim that TikTok is a national security threat.

“I would say that we do have national security concerns, at least from the FBI’s [perspective], about TikTok,” Wray said at a House Homeland Security hearing in November.

“They include the possibility that the Chinese government could use it to control data collection on millions of users or control the recommendation algorithm, which could be used for influence operations if they so chose, or to control software on millions of devices which gives it opportunity to potentially technically compromise personal devices.”

Likewise, security experts have raised the alarm that the app contains code that could be used for keylogging, meaning that it can track and save all information typed into its browser by a user, including bank account information and passwords.

“When you’re actually doing keystrokes, typing each letter, each number, those are being recorded back in China, and under supervision of the Chinese Communist Party,” said Casey Fleming, CEO of advisory firm BlackOps Partners, said during an August interview with “China in Focus” on NTD, a sister media outlet of The Epoch Times.

Rokita, who is seeking emergency injunctive relief and civil penalties against TikTok, said that the lawsuits were necessary to find out at long last just what the company was doing with Americans’ personal data.

“In multiple ways, TikTok represents a clear and present danger to Hoosiers that is hiding in plain sight in their own pockets,” Rokita said. “At the very least, the company owes consumers the truth about the age-appropriateness of its content and the insecurity of the data it collects on users. We hope these lawsuits force TikTok to come clean and change its ways.”

Former U.S. President Donald Trump attempted to ban TikTok from continuing to operate in the United States unless it was sold to an American company, but the Biden administration reversed the order and remains in negotiations with TikTok aimed at amicably resolving those security concerns without forcing the sale of the company. As of this week, U.S. officials no longer believe that such a deal will be reached before next year, according to the Wall Street Journal.

When reached by The Epoch Time about the Indiana lawsuit, a TikTok spokesperson said that the company doesn’t comment on pending litigation, but added that “safety, privacy and security of our community is our top priority.”

“We build youth well-being into our policies, limit features by age, empower parents with tools and resources, and continue to invest in new ways to enjoy content based on age-appropriateness or family comfort,” the spokesperson said in an email.

“We are also confident that we’re on a path in our negotiations with the U.S. Government to fully satisfy all reasonable U.S. national security concerns, and we have already made significant strides toward implementing those solutions,” they added.