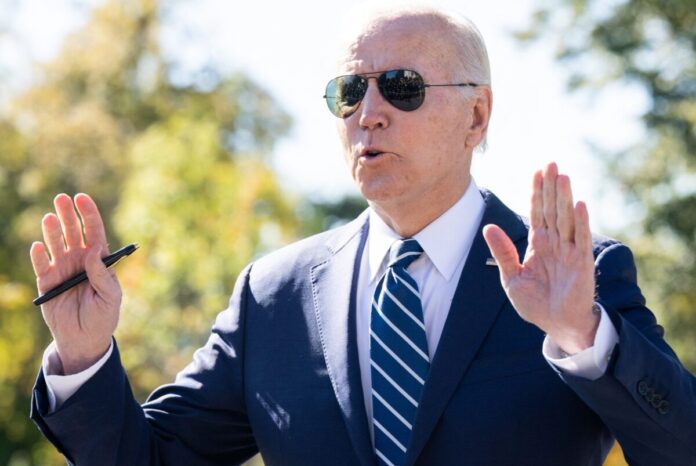 The Biden administration has claims it drained the heavily depleted U.S. Strategic Petroleum Reserve (SPR) in order to save the “global economy.”

The White House’s International Energy Affairs adviser, Amos Hochstein, told CNBC “Squawk Box” host Joe Kernen on Dec. 5: “I had conversations—as did others, my colleagues—with CEOs and other senior executives in the oil industry in the United States … We were told it will take us time to increase production, it would take us six months, seven months to increase production and bring that to market.

“They thought that would be by the end of the year,” he said.

President Joe Biden authorized the release of up to 180 million barrels of oil from the SPR in March, to lower surging gas prices after Russia invaded Ukraine.

Biden has repeatedly blamed spiking gas prices on Russian President Vladimir Putin and American oil companies pushing up their prices. This is despite the administration’s own anti-fossil fuel policies to deny the industry investment funds, which have been a factor in the lowered domestic production and supply of oil and gas—also pushing up prices.

The administration later released another 10 million barrels from the SPR in October right before the midterms, bringing the oil reserve to its lowest level since the 1984, according to Forbes.

Host Kernen said the Biden administration had consistently accused oil companies of price gouging before the midterm elections, but had since dropped their denunciations after gas prices fell in recent weeks.

“So if oil companies and refiners were able to control the prices and gouge and profiteer at the higher levels, why does the Biden administration get credit when market forces take over and they do come down?” he asked.

He then asked if the Democrats “just say this stuff to their base?”

“We took the action with the SPR in order to save not just the U.S. economy but the global economy from the reactions that Putin was trying to do, he was literally using energy as a weapon against the West and we mitigated that and gave time to the private sector to invest more and to invest in America to increase production,” Hochstein said.

Critics have slammed Biden for the move, calling it a cynical move to swing voters to the Democrats which taxpayer would have to pay to replenish.

“Selling 240 million barrels straight into a short-term political outcome without enacting one single policy action to help increase long-term supply should be seen as gross negligence. Inventories of distillates (diesel and jet fuel) are at DANGEROUS levels,” said Kyle Bass, an environmentalist and CIO Hayman Capital Management, in a tweet.

However, when former President Donald Trump suggested filling up the SPR back in March 2020 to assist the oil industry after taking a massive loss during the pandemic, Democrat Senate Majority Leader Chuck Schumer called it a bailout for “big oil.”

Congressional Republicans had suggested spending $3 billion to fill the reserve during the pandemic while it was still cheap.

“For Republicans, there’s always enough money to bail out their corporate donors but not enough for helping working Americans and state and local governments,” Schumer said at the time.

The Department of Energy said in October, that it planned to purchase oil to refill the SPR at $67 to $72 per barrel, nearly three times more than when Trump proposed a refill, when it was still at $24.49 a barrel.

“If President Biden and Democrats in Congress are really concerned about the gas prices that are crushing American families, they should end their assault on domestic energy producers and embrace policies that expand the production of affordable and reliable energy, rather than raiding America’s emergency reserves to hide the problem,” the Senate Republican Policy Committee said in August.