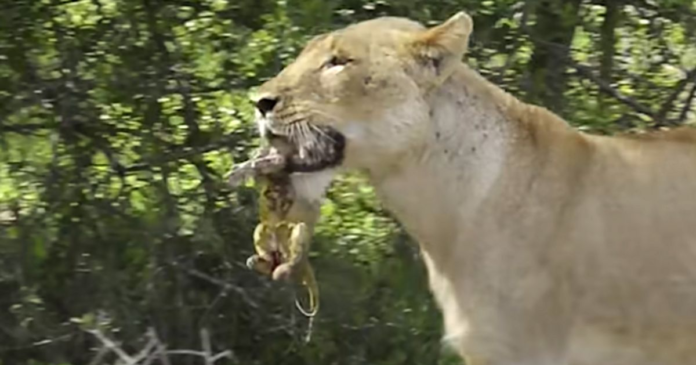 Precious video of a lion giving birth recently in South Africa’s MalaMala game reserve is going viral. (Watch it below.)

The delivery-in-the-wild footage shared by ranger Mrisho Lugenge on Latest Sightings last week is “quite rare,” a spokesperson for the wildlife-viewing platform told HuffPost on Monday.

The edited clip begins with the restless lion alone and moving gingerly. When she lies on her side, observers get a clue that this is no ordinary big-cat sighting.

“It looked as though her stomach was moving,” Lugenge told Latest Sightings. “She was having contractions. Then she sat up straight and began licking herself, which we mistook for grooming. When she turned around, we realized what had just happened. She had just given birth! There it was, the tiniest little cub in her mouth.”

When the time comes, expectant moms generally seek out isolated, hidden areas and don’t rejoin the pride with their offspring until the little ones can walk, according to lionalert.org.

This lion and her cub made their way to a drainage line, and the excited observers wisely chose not to follow. “We thought that might have added extra pressure on her,” Lugenge said. “Hopefully, this will allow her to rest and tend to her young cub without undue stress.”