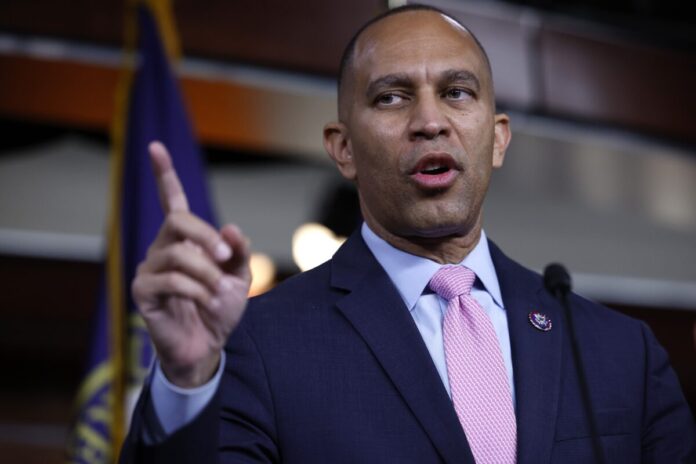 House Democrats on Nov. 30 voted for Jeffries to succeed Rep. Nancy Pelosi (D-Calif.) as the party’s top leader in the lower chamber.

In a speech on the Senate floor shortly after Jeffries’s appointment as leader of House Democrats was announced, Senate Minority Leader Mitch McConnell took aim at the decision, and branded Jeffries an “election denier” who he said had “mounted reckless attacks on our independent judiciary.”

During an interview on ABC’s “This Week,” Jeffries was asked by anchor George Stephanopoulos for his response to McConnell’s comments, noting that the New York Democrat did in fact say that “history will never accept Donald Trump as a legitimate president.”

Jeffries said that it is “unfortunate” that Republicans have chosen to focus on him and his comments regarding the authenticity of the 2016 election.

“My view of the situation has been pretty clear,” Jeffries said. “I supported the certification of Donald Trump’s election. I attended his inauguration, even though there were many constituents and others across the country pushing me and others to do otherwise, and found ways to work with the Trump administration, being the lead Democrat in negotiating historic criminal justice reform. That track record speaks for itself.”

“At the same time, I will never hesitate in criticizing the former president. I think I’m in good company there throughout the world,” Jeffries added.

McConnell in his speech on the Senate floor on Dec. 1 criticized Democrats whom he said have spent years “yelling about the importance of norms and institutions but who have themselves “not hesitated to undermine our institutions when they are unhappy with a given outcome.”

One example of such a Democratic lawmaker to have done so is Jeffries, McConnell said.

“The newly elected incoming leader of House Democrats is a past election denier who basically said the 2016 election was ‘illegitimate’ and suggested that we had a ‘fake president’” McConnell said. “He’s also mounted reckless attacks on our independent judiciary, and said that justices who he didn’t like have ‘zero legitimacy’.”

“Unfortunately, when it comes to attacking our independent judiciary, the Democrats’ new leader isn’t an outlier, he’s a representative sample,” McConnell added.

Jeffries has shared a number of posts on social media in the past claiming that Trump would never be accepted as a “legitimate president”, accusing the former president of attempting to “steal the election” and branding the 2016 election results “illegitimate.”

Such claims have since been overturned, with special counsel John Durham’s criminal probe into the matter disproving the Trump–Russia collusion narrative.