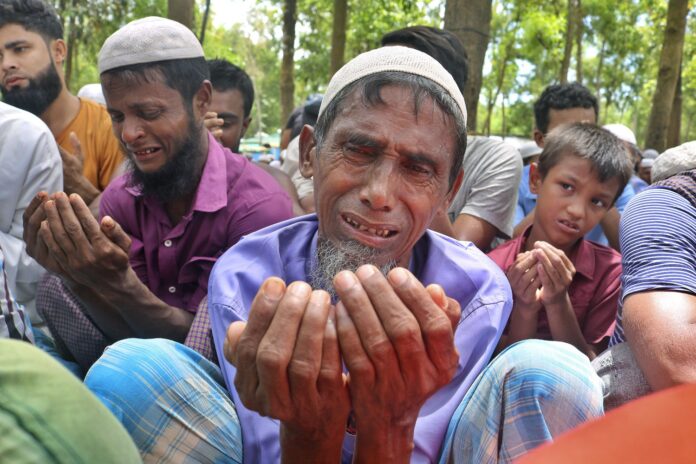 Authorities in Myanmar have launched an investigation after a group of women on their way to the market in Yangon region made a gruesome discovery early on Monday morning – 13 broken and waterlogged corpses believed to be members of the Rohingya ethnic group.

The bodies were found near a trash pile in Hlegu township’s Ngwe Nant Thar village around 3:00 a.m., an eyewitness told RFA Burmese on condition of anonymity, citing security concerns.

“They are definitely not from this village,” the witness said, adding that the victims appeared to range in age from 17 to 30 years old.

“I think they are Rohingya people. I heard that more than 70 of them were arrested in Hlegu yesterday as well.”

A second source, who also declined to be named, told RFA that the women who discovered the bodies immediately contacted local authorities, who launched an investigation into the identities of the victims and the cause of death.

“They went there to take the dead bodies to the hospital and have them examined to determine the cause of death and to open a case in the matter … According to the groups, the dead bodies exhibited signs of injuries.”

The source said at least one of the victims had a “gash on his forehead,” while another had one on his leg, and that all of them “appeared to have been submerged in water for a long time,” despite there being no bodies of water in the area.

“Their hands and feet were wrinkled from water,” they said.

“Some had welts on their backs. Their skin was torn from injuries, as if they had been beaten. The hospital said that they had been dead for more than 48 hours – at least a day before they were found.”

The source told RFA that residents of the area believe the victims may have been killed by local authorities or by brokers they had hired to help them flee squalid conditions in refugee camps in western Myanmar’s Rakhine state and neighboring Bangladesh.

“I heard that the brokers who brought them beat them when they didn’t get the money they wanted,” they said.

“Another possibility is that they were arrested and then killed … [But] I think that it is more likely that brokers killed them.”

A military crackdown on the Rohingya, which started five years ago, led to more than 740,000 Rohingya fleeing from Rakhine state to Bangladesh. Of the more than 600,000 Rohingya who stayed in Myanmar an estimated 125,000 have been confined to IDP camps in Rakhine State.

Hundreds of refugees have paid smugglers to transport them to Thailand and Malaysia, hoping to find work away from Myanmar or the crowded refugee camps of Bangladesh.

RFA data compiled between Dec. 2021 and Sept. 2022 found that nearly 800 Rohingya who tried to leave Rakhine state by land and water were arrested in different parts of Myanmar due to intensified fighting between the ethnic Arakan Army and troops loyal to the ruling military junta.

The military confirmed the discovery in a statement on Monday, which noted that the bodies appeared to be wet and had been sent to Yangon General Hospital for further examination. No further details were provided.

Aung Kyaw Moe, an advisor for the shadow National Unity Government on human rights and the Rohingya, told RFA that the military should not be ruled out as a potential suspect in the deaths.

“To kill this many people could not have been easy for any civilian brokers or human traffickers,” he said.

“The junta has not released any news about the arrest and the detention of [these particular] Rohingyas to date … I have advised NUG’s human rights ministry to start investigating this matter.”

The discovery of the bodies came amid reports of two other groups of Rohingyas fleeing camp conditions.

Local media in Myanmar’s Mon state reported that 78 Rohingyas had been arrested when the motorboat they were traveling in docked at the Ka Mar Wet brook at around 7:00 a.m. on Monday morning.

The Southern Post cited an anonymous resident as saying the arrest took place after junta security forces were alerted to the boat by pro-military informants. The resident said that 56 males and 22 females were among those arrested, and that the group included young children.

RFA was unable to independently verify the arrest.

Also on Monday, RFA obtained photos and videos of a group of 160 Rohingyas, including children, who claimed to be floating adrift in the sea off the coast of Thailand.

NUG advisor Aung Kyaw Moe told RFA that he had learned through family members of the people on the boat that “they have a mobile phone onboard.”

He said that a person in contact with the passengers claimed “the boat has been adrift for more than 10 days due to engine failure.”

The reports also follow the arrest in Hlegu township last week of 71 Rohingya refugees on immigration charges, according to a Sunday announcement by the junta.

According to a list obtained by RFA, at least 1,380 Rohingyas were arrested in Myanmar between Dec.1, 2021 and Nov. 11, 2022 – 223 of whom are currently serving prison sentences of between 2 and 5 years for allegedly violating the country’s immigration laws.