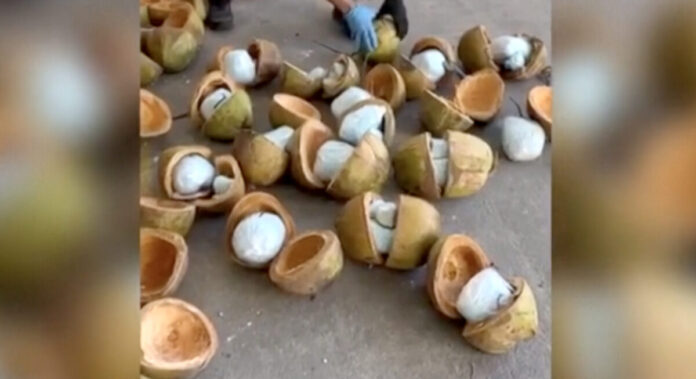 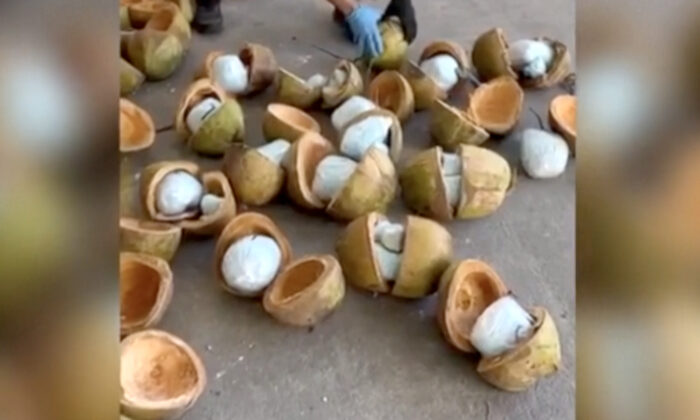 Coconuts filled with fentanyl seized by Mexican authorities in Puerto Libertad, Mexico, on Dec. 1, 2022, in a still from video. (Prosecutor General’s Office of Mexico via AP/Screenshot via The Epoch Times)

The coconuts were found in a truck traveling on a highway in the northern border state of Sonora.

Prosecutors said the truck was detected Thursday on a road that runs along the Gulf of California, also known as the Sea of Cortez.

According to photos of the bust, the coconut husks had been neatly split in half, and re-assembled with plastic bags of fentanyl pills inside. The road eventually leads to the border town of Sonoyta, across the border from Lukeville, Arizona.

Mexico produces most of the fentanyl that reaches the United States, using chemical precursors imported from China and elsewhere.

Fentanyl is blamed for tens of thousands of U.S. overdose deaths each year, because the extremely powerful synthetic opioid is pressed into counterfeit pills often made to look like Xanax, oxycodone, or Percocet. Many people who take them do not know they are taking fentanyl.