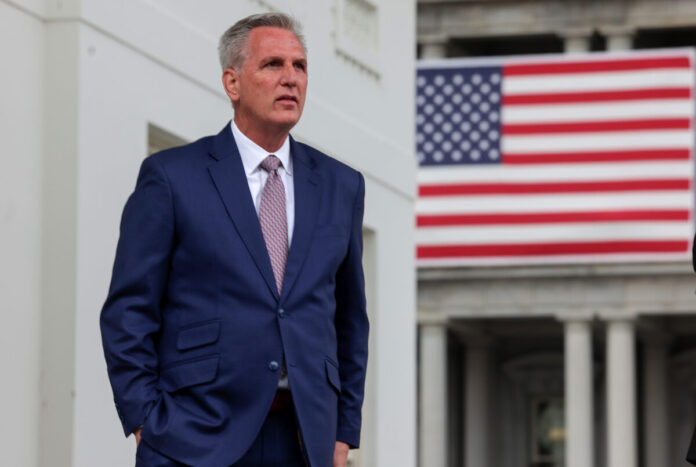 Speaking on Fox Business Network’s “Sunday Morning Futures,” McCarthy said that lawmakers are working through the $817 billion national defense bill with the hopes of lifting the vaccine mandate among military personnel.

The mandate has been in place since August 2021.

“We will secure lifting that vaccine mandate on our military because what we’re finding is, they’re kicking out men and women that have been serving,” McCarthy said, noting recruitment shortfalls. “That’s the first victory of having a Republican majority, and we’d like to have more of those victories, and we should start moving those now.”

According to Defense Department data, 3,717 Marines, 1,816 soldiers, and 2,064 sailors have been discharged for refusing to get vaccinated against COVID-19, although a small portion has been allowed to remain in service owing to religious or medical waivers.

As of Dec. 1, over 11,500 members of the Army, Army National Guard, and Army Reserve have declined to get vaccinated against COVID-19, Axios reported, while 97 percent of the Army’s active personnel received the shot.

Army Missing Out on Recruitment Goals

Various military bodies have been struggling to meet their recruitment goals in part over the vaccine mandate, with the U.S. Army reaching just 75 percent of its recruitment goal of 60,000 for this year, according to Army Secretary Christine Wormuth.

McCarthy also said on Sunday that he had spoken with President Joe Biden last week and “laid out very clearly what the difference will be with the new Republican majority.”

When asked if the NDAA will move forward if the vaccine mandate is not lifted, McCarthy confirmed it will not, pointing to his meeting with Biden. The NDAA, which lays out the annual budget and expenditures of the U.S. Department of Defense, has become law every year for six decades.

“I’ve been very clear with the president, the president worked with me on this,” said the lawmaker, who is the Republican nominee for the next speaker of the House of Representatives.

The White House confirmed on Sunday that it is considering McCarthy’s proposal to scrap the military’s requirement that personnel are fully vaccinated, despite Defense Secretary Lloyd Austin on Dec. 3 vowing to continue imposing the mandate.

“Leader McCarthy raised this with the president and the president told him he would consider it,” White House spokesperson Olivia Dalton told Reuters. “The secretary of defense has recommended retaining the mandate, and the president supports his position. Discussions about the NDAA are ongoing.”

Republicans have been calling on the Biden administration to scrap the vaccine mandate for military personnel, claiming that the move, which has been inundated with lawsuits, has hurt the National Guard’s ability to recruit troops.