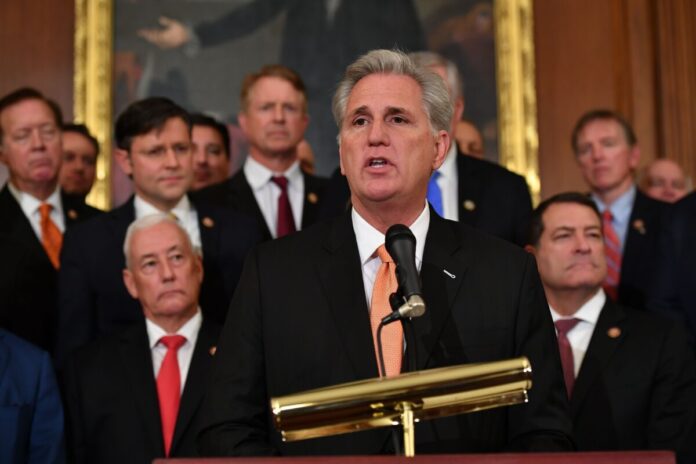 House Minority Leader Kevin McCarthy (R-Calif.) on Sunday said that a number of Republican lawmakers opposing his bid for speaker of the House pose the biggest threat to his takeover.

McCarthy, who is the Republican nominee for the next speaker of the House, made the comments in an interview with Fox Business Network’s “Sunday Morning Futures.”

The interview comes as a growing number of GOP lawmakers, including Reps. Andy Biggs (R-Ariz.), Matt Gaetz (R-Fla.), Bob Good (R-Va.), Ralph Norman (R-S.C.), and Matt Rosendale (R-Mont.) have indicated they plan to vote against electing him as speaker in January when the House is set to vote on the decision.

The California lawmaker told Fox that he has spent “hours” meeting with the House Freedom Caucus ahead of Jan. 3.

“Right now, it’s actually delaying our ability to govern as we go,” McCarthy said. “So I’m hopeful that everybody comes together, finds a way to govern together. This is what the American people want. Otherwise, we will be squandering this majority.”

House Republicans nominated McCarthy as speaker of the House on Nov. 15 during a closed-door meeting on Capitol Hill in Washington.

Military Vaccine Mandate May Be Dropped

However, he will need to secure 218 votes for the position of House speaker, which is the third in the line of presidential succession, meaning that he cannot lose more than four votes.

Republicans are expected to have 222 seats in the House during the 118th Congress, commencing in January 2023, compared to Democrats’ 213.

McCarthy added that while “everybody is respected in the House” it’s important to remember that just five GOP members could greatly impact his chance at succeeding in the speaker role.

Elsewhere on Sunday, McCarthy promised that the fiscal 2023 National Defense Authorization Act (NDAA) will not move forward unless the military’s COVID-19 vaccine mandate, which has been in place since August 2021, is dropped.

The House and Senate are expected to vote on the NDAA this month.

McCarthy pointed to recruitment shortfalls across the military in light of the vaccine mandate, noting that he had been “very clear” when speaking with President Joe Biden that the NDAA would not proceed unless the mandate is lifted.

The White House confirmed on Sunday that it is considering McCarthy’s proposal but noted that Biden supports keeping the mandate in place, as recommended by Defense Secretary Lloyd Austin.