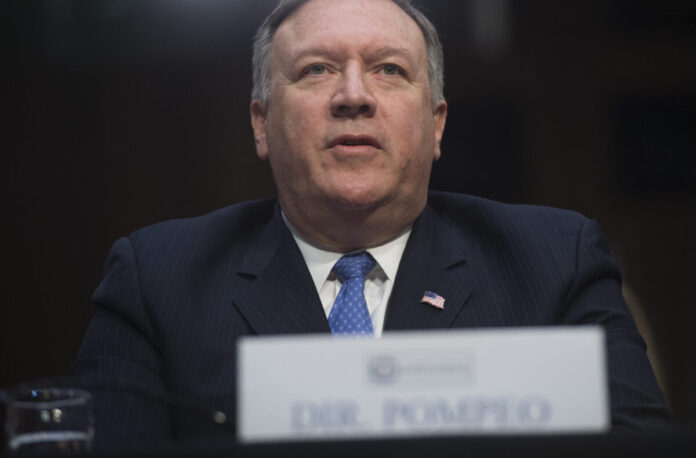 Former Secretary of State Mike Pompeo said Monday that President Joe Biden’s “obsession to decarbonize” the United States plays into the hands of adversaries like the Chinese Communist Party (CCP), making them richer and more powerful while imposing costs on Americans and making them less safe.

In an op-ed published on Dec. 5 in the Washington Examiner, Pompeo argued that the Biden administration’s focus on fighting climate change is misguided and will hurt U.S. families while empowering the country’s adversaries.

He took aim at the so-called Inflation Reduction Act, which Biden recently described as the “biggest, most important climate bill in the history of our country” and which Pompeo said would make life more expensive for American families.

“The statement was telling: Americans were told its purpose was to reduce inflation, but in reality, it was a gaslighting Trojan horse,” Pompeo wrote in the op-ed, referring to Biden’s characterization of the Inflation Reduction Act, which the president made at a recent climate summit in Egypt.

Biden’s description of the measure “perfectly encapsulated how climate change and green energy have skewed this administration’s priorities,” Pompeo wrote.

When selling the Inflation Reduction Act to the American people, the Biden administration said it was meant to reduce inflation, which has been running close to a 40-year high.

Pompeo argued that “in reality, it was a gaslighting Trojan horse meant to conceal the Biden administration’s real priority,” which Pompeo said is to fight fossil fuels.

Pompeo also criticized U.S. foreign policy under Biden as being so highly focused on fighting climate change that it diverts attention from the “real threats” posed by America’s adversaries on the world stage.

“Biden’s obsession to decarbonize America is guaranteed to enrich and empower the Chinese Communist Party,” he argued.

“A sizable portion of the law’s handout will go toward solar energy despite this administration being well aware that Chinese manufacturers dominate 80 [percent] of the market for solar panels and that many of them have ties to forced labor in Xinjiang,” he noted as an example.

When Pompeo served as Secretary of State under then President Donald Trump’s administration, he issued a determination that the CCP was guilty of genocide and crimes against humanity over its mistreatment of Uyghurs in Xinjiang.

Chinese officials have denied such allegations.

Congress later passed the Uyghur Forced Labor Prevention Act (UFLPA), which banned the import of goods from Xinjiang and other regions with links to forced labor.

Even though Biden signed the UFLPA into law, Pompeo alleged that the current administration has “displayed mixed feelings” about enforcing the measure in its bid to win concessions from China on climate change.

John Kerry, the U.S. special presidential envoy for climate, faced allegations of lobbying against the UFLPA, which his spokesperson denied.

“This is false. Secretary Kerry has a thirty-seven-year record as a Senator and Secretary of State standing up for human rights and defending democracy,” a State Department spokesperson told the Washington Free Beacon.

“As Secretary Kerry has said from the start, the United States and China have mutual interests in solving the climate crisis while there’s still time, even when we fundamentally disagree on other critical issues,” the spokesperson added.

Kerry also sidestepped a question during last year’s COP26 Climate Change Conference, saying the issue was “not my lane.”

He was responding to a question from a reporter if he had mentioned human rights issues, including forced labor in Xinjiang, in meetings with Chinese officials.

“Well, we’re honest. We’re honest about the differences, and we certainly know what they are and we’ve articulated them, but that’s not my lane here,” Kerry said in November 2021. “My job is to be the climate guy, and stay focused on trying to move the climate agenda forward.”

Pompeo recalled the controversy over Kerry’s remarks and called the climate czar’s comparison of the Biden administration’s climate diplomacy with China to former President Ronald Reagan’s arms reduction talks with the Soviet Union as “foolish.”

“Reagan was looking to make the world safer, while Biden is enabling genocide in exchange for making energy less affordable and reliable for Americans,” Pompeo said.

“And it is ironic, given the Chinese are building coal-fired power plants at a ridiculous rate and only making the problem worse,” he added.

Pompeo argued that by “foolishly” prioritizing climate change in its dealings with the CCP over gross human rights abuses, aggressive actions against U.S. allies, and the CCP’s espionage activities in America, the Biden administration has empowered China.

The Epoch Times has reached out to the White House for comment.

Pompeo recently said that he’s considering a run for the White House in 2024 but hasn’t yet made a decision.

“We’re still working our way through,” Pompeo told Fox News late last month, referring to his 2024 timetable. “We figured by the first quarter next year we need to be hard at it if we’re going to do it,” he added.

Pompeo, who was also CIA director during the Trump administration, added that his former boss’s official launch of the 2024 bid wouldn’t keep him from running.

“Who else decides to get in the race won’t impact our decision,” Pompeo said.

At the same time, Pompeo said in an interview with CBS that if Trump wins the 2024 GOP presidential nomination, he will vote for him.

Tom Ozimek is a senior reporter for The Epoch Times. He has a broad background in journalism, deposit insurance, marketing and communications, and adult education.