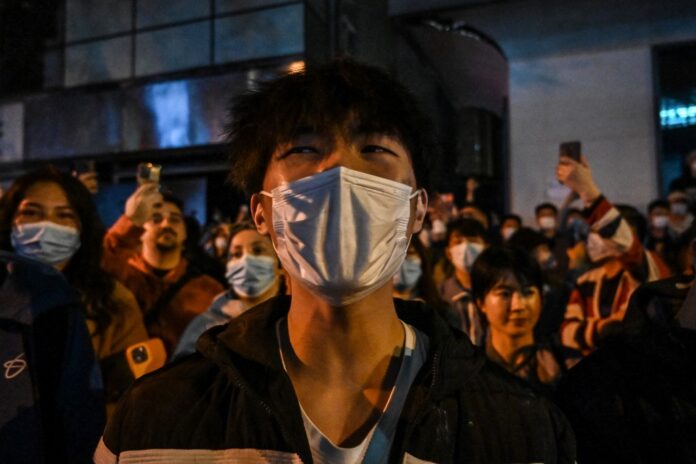 It had the makings of a perfect storm: Street protests in major cities voicing shared frustration with harsh COVID-10 curbs. The death of a former leader remembered as less repressive than the hardline incumbent. And a blank white paper message taunting a ruling party terrified of pro-democracy “color revolutions.”

The storm was quelled as the Chinese Communist Party used the “stability maintenance'” tactics that have kept China at the bottom of every international index of freedom. Authorities sent students home on trains, cleared the streets, censored media reports and on-line videos, and cracked heads. Detention and jail likely await alleged leaders.

But the brief burst of protests in dozens of cities sparked by a deadly apartment block fire in the Xinjiang regional capital of Urumqi on Nov. 24 that many blamed on stringent COVID-19 lockdown measures was not a damp squib.

China announced a measured easing of some COVID-19 lockdown measures in several cities, easing strictures that have kept people cooped up for years in some cases. This was done without mention of the protests, which included isolated calls for President Xi Jinping and the Communist Party to step down.

Citizens around China learned about the plight of Uyghurs, fellow citizens who have endured harsher lockdowns than Han Chinese, as well as five-year-old campaign of forced incarceration and other harsh policies that has been branded genocide or crimes against humanity in many Western capitals.

The larger and potentially more lasting impact was the symbolic challenge to the accepted wisdom that has accumulated since People’s Liberation Army troops put down pro-democracy protesters near Tiananmen in 1989: that China has built up such a vast apparatus of repression that it is impervious to protest.

The protests delivered “hope in a way that makes us start to believe that China’s incredibly extensive censorship machine is not quite so well-oiled as we imagined,” said the UK-based freedom of speech watchdog Index on Censorship.

“Since Xi Jinping came to power 10 years ago, the amount of control he has amassed has been terrifying. What the last few days have shown is that it’s far from absolute,” wrote Jemimah Steinfeld, editor-in-chief of Index on Censorship magazine.

‘Err on the side of strict management’

To be sure, China has kicked its extensive censorship machine into high gear.

The China Digital Times website obtained and translated a Nov. 29 directive from the Cyberspace Administration of China that, among other measures, ordered a crackdown on VPNs, virtual private servers, overseas Apple accounts and other censorship circumvention tools and on user-generated content, including videos.

“Given the recent high-profile events in various provinces, information about offline disturbances and backflows of overseas information must be rapidly identified, dealt with, and reported,” the translated document said.

“Err on the side of strict management and control of content related to public gatherings, people rushing COVID checkpoints, and particularly content related to colleges and universities. Strengthen preliminary auditing, and stringently investigate incendiary accounts,” it said.

Not all censorship and information management efforts worked, however, and some were openly mocked by netizens.

When authorities on Nov. 28 resorted to is decades-old tactic of blaming the wave of nationwide protests on “hostile foreign forces,” netizens were having none of it.

“By foreign forces, are you referring to Marx and Engels?” the New York Times quoted an on-line reaction noting that Communist ideology was partly a German import.

The death on Nov. 29 of former President Jiang Zemin, whose 1990s tenure is associated with a more reformist and open China, evoked memories of historic moments of mourning and protest in Beijing in 1976 and 1989 and led some observers to expect the Jiang’s passing to swell the protest ranks.

The Tiananmen protests were in part set off by the death of popular leader Hu Yaobang. Protests at Tiananmen in April 1976 were sparked by the death at the beginning of that year of Premier Zhou Enlai, remember for moderating some of the harsh and erratic policies of Chairman Mao Zedong.

A similar outpouring of grief did not occur last month for Jiang, however.

The movement is the message

Kevin Slaten, who leads analysis of protests China Dissent Monitor at the U.S. government-backed NGO Freedom House, cautioned against any thought that Beijing was permitting protests or would be forgiving toward demonstrators.

“There was immediate repression. We saw all sorts of different measures to try to demobilize and repress further protests after the fact,” he told RFA.  “The students were sent home early. There were people being beaten, people being hunted down.”

Slaten said the late November anti-lockdown protests differed from the hundreds of protests documented by China Dissent Monitor in every year–mostly local disputes over land rights, real state fraud and, recently, COVID policies–with characteristics of a movement including “interconnectivity, the shared symbolism and then some of the political demands.”

“Even if the movement isn’t sustained in the streets right now, in the immediate term, the information got out and it was widespread. We know that people around China knew what was happening. And now, there’s diaspora Chinese students who are responding to this,” he said.

“This memory is not just going to dissipate.”