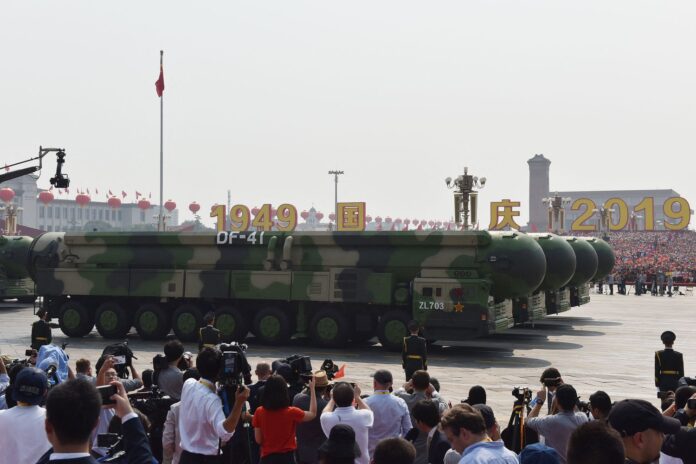 Beijing accelerated its nuclear weapons program last year and has nearly doubled its supply of warheads since 2020 to past 400, a size that U.S. military planners did not expect to see until about 2030, a new report from the Department of Defense says.

The 2022 China Military Power Report, the latest edition of an annual report mandated by the U.S. Congress, says Pentagon planners in 2020 estimated China’s stockpile of warheads was in the “low-200s” and might double by the end of the decade.

But a rapid expansion of warhead building – part of an effort to reach what Beijing terms a “basically complete modernization” of the People’s Liberation Army by 2035 – has sped that up.

“If China continues the pace of its nuclear expansion, it will likely field a stockpile of about 1,500 warheads by its 2035 timeline,” the report says. “By 2030,” it adds, China “will have about 1,000 operational nuclear warheads, most of which will be fielded on systems capable of ranging the continental United States.”

The report says the figures are just estimates since China’s government has not “acknowledged the scale of its expansion” – or “declared an end goal” or reason for the expansion – “and has declined to engage in substantive arms control discussions.”

According to the Stockholm International Peace Research Institute, China’s stockpile is currently the world’s third largest. But 90 percent of the world’s nuclear weapons arsenal belongs to the two largest nuclear powers: Russia and the United States, who have stockpiles of 4,477 and 3,708 weapons, respectively.

The Pentagon report says Chinese military expansion in general should be understood as part of Beijing’s self-proclaimed efforts to achieve “the great rejuvenation of the Chinese nation” by 2049, and the Communist Party leadership’s view that the United States is undertaking a “whole-of-government effort” to stymie that.

“Strengthening the PLA into a ‘world class’ military” capable of carrying out an “active defense” against threats is a key part of this, the report says, with 2027 recently being set by policymakers in Beijing as a major milestone for modernization efforts.

The report notes that although China already has the world’s largest navy and is the “top ship-producing nation in the world by tonnage,” it is continuing to expand its capacity to produce “submarines, warships, and auxiliary and amphibious ships,” as well as increasing its ability to produce aircraft.

It also says that information warfare is a key part of China’s military planning, with Beijing actively seeking to “to condition international institutions and public opinion” to accept its views on Taiwan unification, the South China Sea and Hong Kong.

“The PLA views controlling the information spectrum in the modern battlespace as a critical enabler and means of achieving information dominance early in a conflict,” it says.