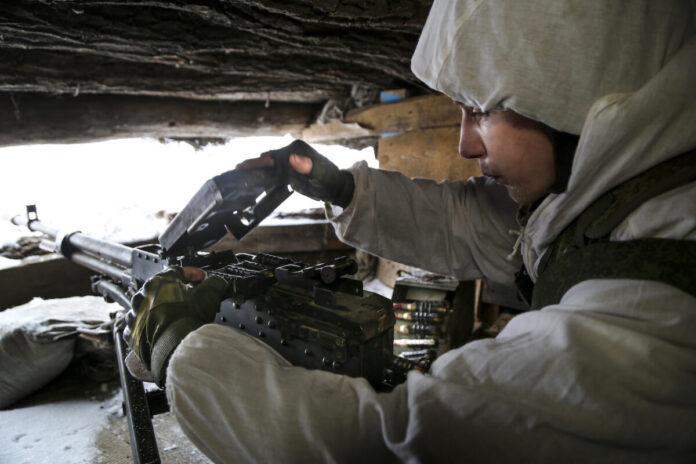 According to Moscow, the footage clearly shows Ukrainian forces killing Russian troops who had already surrendered. But Kyiv says its soldiers merely acted in “self-defense” after being fired upon.

The incident serves to highlight the murky nature of the conflict, which, since it began nine months ago, has been characterized by diametrically-opposed narratives regarding events on the ground.

“Based on the footage alone, it’s impossible to tell exactly what happened,” Aydin Sezer, a Turkish political analyst, told The Epoch Times.

“Regardless of the reality of the situation,” he added, “this conflict has already seen countless incidents that can be easily perceived as war crimes.”

The series of short videos first appeared last week on Ukrainian social-media accounts. They include both cellphone footage taken by a Ukrainian soldier and footage captured by an aerial drone.

On Nov. 20, the New York Times ran a lengthy article on the footage, the authenticity of which it claims to have verified.

The incident is believed to have occurred earlier this month in the town of Makiivka in the northeastern Luhansk region, which remains the scene of fierce fighting between Russian and Ukrainian forces.

In the footage, several Russian soldiers, who appear to have surrendered, can be seen lying face-down on the ground while armed Ukrainian soldiers look on.

At one point, a Russian soldier emerges from a nearby structure and opens fire, after which the camera abruptly cuts away.

It remains unclear what happened next, but in another brief video, the same Russian soldiers can be seen lying motionless in what appear to be puddles of blood.

A forensic expert cited by the New York Times said most of the slain Russian soldiers appear to have been shot in the head.

The Russian Defense Ministry says the footage constitutes proof of the “deliberate and methodical murder” of its soldiers by Ukrainian forces.

“This brutal murder of Russian servicemen is neither the first nor the only war crime” committed by Ukraine, the ministry said in a Nov. 18 statement.

It went on to claim that such crimes were “common practice” among the Ukrainian military and were “actively supported by the Kyiv regime and ignored by Kyiv’s Western backers.”

Russia has since called on the United Nations to investigate its “war crime” allegations.

Sezer, who previously served as a commercial adviser at Turkey’s embassy in Moscow, voiced doubt that Russia’s appeal to the world body would yield any tangible results.

“Even if it can be proved that Ukrainian forces perpetrated a war crime, I don’t expect anything to come of it,” he said.

“Much of the world, especially the West, views Russia as an occupier,” he said. “And unfortunately, incidents of this kind are inevitable during wartime.”

On Nov. 20, Lubinets counter-accused Russian forces of feigning surrender before opening fire on their Ukrainian captors.

“From separate pieces of the video … it can be concluded that, using a staged capture, the Russians committed a war crime,” he said on the Telegram messaging app.

“They opened fire on [Ukrainian] soldiers,” he alleged, going on to accuse the slain Russian soldiers of “perfidy.”

According to the Geneva Conventions, which lay down international standards for humanitarian conduct during wartime, “perfidy” can be defined as “the feigning of an intent to negotiate under a flag of truce or of a surrender.”

“The laws of war apply to all parties equally, both the aggressor state and the defender state, and this is in equal measure,” she told reporters.

But Van Schaack went on to deride Russian reactions to war crime allegations while praising Kyiv’s response to such claims.

“Russia inevitably responds with propaganda, denial, mis- and dis-information, whereas Ukrainian authorities have generally acknowledged abuses and have denounced them and have pledged to investigate them,” she said.

Sezer, for his part, disputes the assertion.

“Russia never misinforms about events that might put it in a difficult situation later on,” he opined.

“Yes, Russia conducts a hardline foreign policy,” Sezer added. “But in cases like these, it generally provides truthful information and clearly states in advance what it’s going to do.”

On Nov. 22, Kyiv reportedly opened its own criminal proceedings against the Russian armed forces for alleged “perfidy” and violations of the “rules of war.”

“The Russian servicemen, pretending to surrender to Ukrainian servicemen, opened fire on the Ukrainian defenders,” read a statement posted on Telegram by the office of Ukraine’s prosecutor-general.

“Such deeds are forbidden under international humanitarian law,” it added.

In response, Daniil Bessarabov, a prominent Russian lawmaker, accused Kyiv of “trying to dodge responsibility by coming up with counter-accusations.”

Speaking to Russia’s TASS news agency on Nov. 23, Bessarabov called on “all sensible people” to “not to let the guilty escape responsibility, but to identify them and make sure they stand a fair trial.”

According to Sezer, the entire episode reflects an ongoing “war of perception” between Moscow and Kyiv’s formidable Western allies.

“The real war isn’t between Ukraine and Russia,” he said. “Ukraine is just a pawn that is being used by the West.”

Kyiv also typically enjoys the support of the Western mainstream media, which Sezer described as “quite skillful” at manipulating public opinion.

“In the media war,” Sezer concluded, “Russia stands no chance against the West.”