The Clouds of War 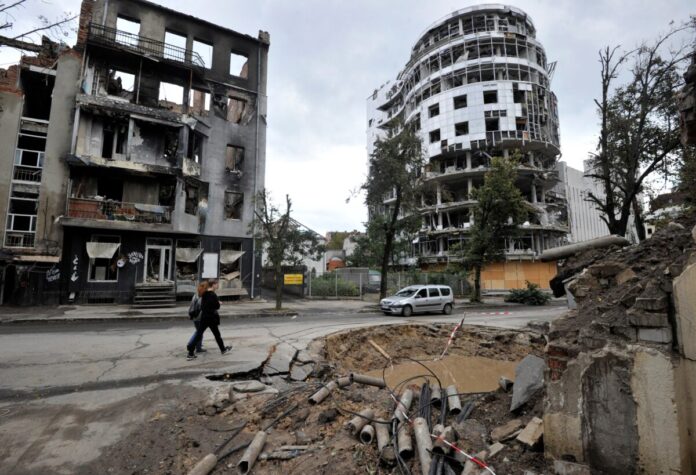 Democracy and freedom are under threat. They always are in times of war.

Today, the war is hot in Ukraine, but there are others brewing. In Taiwan. On the Korean peninsula. Between Israel and Iran. Potentially between NATO and Russia, or the United States and China. Possibly, disastrously, between all at once.

Wars tend to spark other wars because aggressors sense opportunity when the world is distracted and encourage wars elsewhere to increase those distractions. War is thus a negative feedback loop that continues until aggressors win or burn out.

Much of the left media, desperate to alter the course of war, blame the democratic leaders they can reach rather than the clear aggressors in Moscow, Beijing, Pyongyang, and Tehran. They do so because they can influence leaders at home and are used to denouncing “American militarism,” though not always in such crass terms.

They do so to justify more social services and votes for Democrats, in whom they passionately and religiously believe. In that religion of the left, America is at fault for Moscow’s invasion of Ukraine. America is at fault for “tensions” with Beijing. Just as America was at fault for defending itself in Afghanistan, or maintaining the international order of sovereign states by expelling Iraq from Kuwait.

Weapons of mass destruction were not found in Iraq, which does not mean they were not there. And leftists rarely dwell on the details of what led to U.S. suspicions in the first place. Saddam Hussein’s games of cat and mouse with weapons inspectors. His refusal to allow U2 flights over the country. His prior use of chemical weapons on his own people.

All is forgotten in the rush to blame American militarism for all that is wrong in the world. American leftists who do so encourage our European allies to likewise see us as the problem. We Americans are the aggressors, not Beijing, even as the latter builds the military forces necessary to conquer Taiwan and make clear they are ready to execute at any time.

Thus, in the face of obvious aggression, our universities—filled with leftist professors and students who pat themselves on the back for being uniquely educated and au courant with the latest causes in The New York Times and The New Yorker—are silent.

Only if the United States and its allies are militarily active, and thus if their own lives, student loan forgiveness, or social services are at stake, would they protest. And those protests would be against the U.S. military meant to defend them rather than the aggressors in Beijing and Moscow that drive arms races in the first place.

Western universities are impresarios at making leftist music to Chinese communist ears, encouraging the most dangerous aggressors in Beijing to believe they are on the “right side of history” to threaten war against “capitalist” Taiwan, “backward” India, and the historical “imperialism” and contemporary “hegemony” of the United States.

At the G20 on Nov. 15-16, democratic leaders from the United States, Canada, Australia, and elsewhere attempted to smile away China’s war clouds. If history is any indication, smiles alone cannot stop this horrible human institution of authoritarian war once it starts rolling. Engagement, and other forms of appeasement, fail when the goal of a powerful dictator is revanchist aggression to correct a perceived humiliation. This describes Nazi Germany in the 1930s, and Russia and China today.

But other than Czechoslovakia in 1938, and Ukraine and Taiwan today, all frontline states, who will fight and win the war on the democratic side? Countries, including democracies, avoid paying the price of war if they can make someone else do so. Let the battle take place in someone else’s country, if at all possible. Even if that country is a democratic ally.

Enter at the last minute, to claim victory and global dominance through one’s own military, still standing, and reconstruction loans. During the two world wars, Europe paid in lives lost and infrastructure destroyed. We Americans don’t like to admit that during World War II, we waltzed in late, with fresh troops, to win, provide loans, take the glory, and mold the resulting international order in our own image.

We did a lot of good in the process, but if we and our toughest ally, the British, had been ahead of the Germans with boots on the ground where they planned to attack, we might have stopped the two world wars from starting in the first place.

Today in Ukraine, we again fail to put boots on the ground where we know Russia plans to invade. The Ukrainians are paying the price to defend all of Europe. If they lose, Poland, Slovakia, Hungary, and Romania will be the new frontline states. They are all NATO members, and the front will be broader and harder to defend. Democratic forces will be spread more thinly, and the Ukrainians will be forced to fight for Moscow against us.

Our international order—the single world order that France now champions to thunderous applause, that China seeks to destroy and rebuild in its own totalitarian image, and that the United States founded in 1945 and seeks to preserve through economic defense misunderstood as dividing the world into two trading blocs—is under threat.

Europe remembers the costs of war more than its glories, and is madly backpedaling away from that cliff toward which we are all sliding. Unfortunately, they show fear in the process, encouraging the bullies to demand more. Their alternative to standing our ground requires continued economic dependence on the adversary and giving away Ukrainian or Taiwanese territory through negotiation, all of which strengthens the bullies for future aggression.

Meanwhile, the Biden administration, whose policies are weaker than necessary to stop the threat, is still ahead of our yet more leftist allies in Europe. Germany, France, and the Netherlands are the lead “backpeddlers.”

That weakness led to the destruction of Europe and the loss of much of its international influence.

Russia and China are now taking the place of historical Germany and Japan as global aggressors, and still, the continent is so weak as to attract aggression. Only countries like Poland, well-steeped in the history of victimization, along with the United States and Britain, are leading in the recognition of the growing power of aggressors in Moscow and Beijing. But these countries now ring the alarm bells among those deafened by the jingling of Beijing’s coins.

Instead of competing with Beijing and Moscow economically and militarily, Brussels is competing with Washington in costly subsidies of electric vehicles that can never defend our countries from the totalitarian threat, and that help our adversaries avoid global warming as much as it helps ourselves.

While we specialize in purchasing green technologies, China specializes in profiting from them and using that money to build a military to defeat us.

Sharks and lions attack the weakest and dumbest stragglers of the pack—never the strong and fast out front. Sadly, Ukraine and Taiwan, stripped of the most powerful weapons needed to defend themselves and rejected from democratic alliance systems, have been left behind for the predators. That short-sightedness on NATO’s part ironically increases the threat of war and the likelihood of our own destruction.

Democracies must learn to stop fleeing and turn around as one to face our aggressors. There should be no more excuses that this or that democracy is not a member of an alliance or is not a recognized sovereign nation. By that logic, aggressors can and will pick us off one at a time until there are no more democracies left to conquer.

Anders Corr has a bachelor’s/master’s in political science from Yale University (2001) and a doctorate in government from Harvard University (2008). He is a principal at Corr Analytics Inc., publisher of the Journal of Political Risk, and has conducted extensive research in North America, Europe, and Asia. His latest books are “The Concentration of Power: Institutionalization, Hierarchy, and Hegemony” (2021) and “Great Powers, Grand Strategies: the New Game in the South China Sea” (2018).