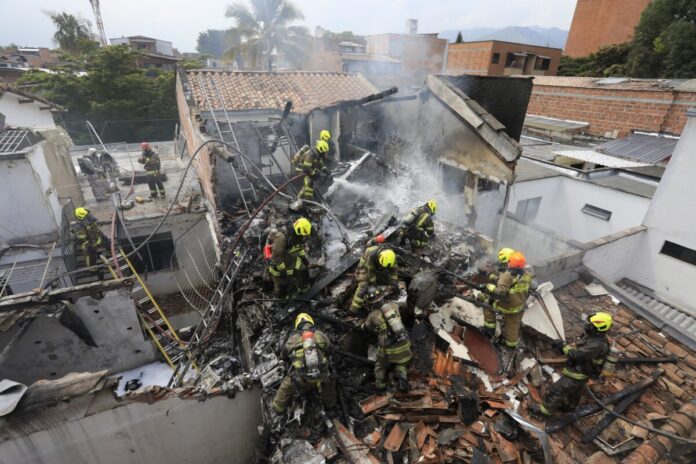 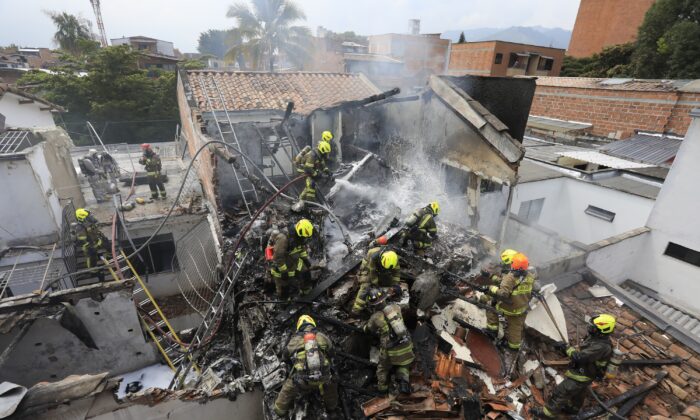 Firefighters work at the crash site of a small plane that fell on top of homes in a residential area of Medellin, Colombia, on Nov. 21, 2022. (Jaime Saldarriaga/AP Photo)

MEDELLIN, Colombia—A small plane crashed Monday in a neighborhood in the central Colombian city of Medellín, killing eight people on board, airport authorities said. No injuries were immediately reported on the ground.

The aircraft crashed after taking off from the Olaya Herrera Airport, Colombian aviation officials said in a statement. The victims were identified as six passengers and two crew members. It was not immediately clear if more than eight people were on the plane.

The exact cause of the crash has not yet been determined. Medellín Mayor Daniel Quintero said in a statement that the aircraft experienced “an engine failure” during takeoff.

“Unfortunately, the pilot was not able to keep the plane aloft and it crashed in this neighborhood,” Quintero said. Seven homes were destroyed and six other buildings damaged, he said.

Firefighters and other emergency personnel responded.

The aircraft, a twin-engine Piper PA-31, was traveling to the western department of Chocó.