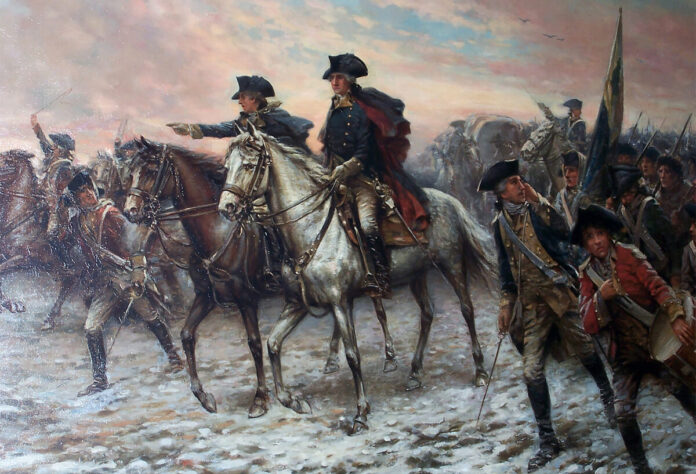 A federal law that dates to 1792 could play a major role in whether five Oath Keepers defendants on trial for seditious conspiracy in Washington are convicted of an alleged plot to attack the Capitol on Jan. 6 or acquitted because one can’t conspire to do something legal.

Prosecutors contend the Insurrection Act is nothing but a legal cover for the Oath Keepers to use force to interrupt the counting of Electoral College votes by a Joint Session of Congress on Jan. 6, 2021, and to keep President Donald Trump in office.

Attorneys for Rhodes say he hoped Trump would invoke the Insurrection Act in response to widespread rioting, looting, and vandalism that occurred throughout 2020. The weapons the group brought to Virginia before Jan. 6 were only for use if Trump called up a militia to protect the White House from attacks by Antifa, they said.

Trump never used the Insurrection Act, but “the Act does confer broad authority to presidents to use the militia to quell ‘unlawful obstructions, combinations, or assemblages’ or ‘any insurrection, domestic violence … or conspiracy,’ ” Rhodes attorney James Lee Bright wrote in a memorandum filed with the court.

One of the keys to the trial will be arguments on whether the cache of firearms brought by Rhodes and others and stored at a Virginia hotel were there for attacking the government as prosecutors contend, or for use if Trump invoked the Insurrection Act to protect the White House or other facilities.

“The Insurrection Act has been there from the beginning, but it really got strengthened up post-Civil War,” Rhodes told the FBI. “And so it gives the president the plenary authority to—for him to determine when there’s an insurrection in effect. Like last year when Antifa and BLM were burning down half of America, he could have used the Insurrection Act.”

Rhodes wrote an open letter to Trump in December 2020 urging him to invoke the Insurrection Act in response to “well-orchestrated mass vote fraud.”

“This is your moment of destiny. Will you take your place in history as the savior of our Republic, right up there with President Washington and Lincoln?” Rhodes asked.

“Or will you fail to act, while you still can, and leave ofﬁce on Jan. 20, 2021, leaving we the people to ﬁght a desperate revolution/civil war against an illegitimate usurper and his Chicom puppet regime?”

In an interview with two FBI agents on May 3, 2021, Rhodes said his big concern leading up to Jan. 6 was Antifa making good on threats to sack the White House.

The Insurrection Act has been legally invoked 30 times by 17 presidents, according to the Brennan Center for Justice, a New York-based law and policy center.

“The Insurrection Act allows the president to deploy the military inside the United States and use it against Americans, making it one of the executive branch’s most potent emergency powers,” the Brennan Center’s Joseph Nunn and Elizabeth Goitein wrote in the organization’s guide to the Insurrection Act.

In 1794, President George Washington used the act and led a militia into Pennsylvania to put down a revolt started over a liquor tax. The Insurrection Act was most recently used by President George H.W. Bush to quell Los Angeles violence after the beating of a black man, Rodney King, by white police officers in 1992.

“We weren’t saying that Trump ought to [indiscernible] the Insurrection Act and go and round up all the leftists and put them in concentration camps,” Rhodes told the FBI. “That’s not what we were saying. But, you know, suppress the insurrection.

The Brennan Center on Sept. 20 wrote to the House Jan. 6 Select Committee, urging Congress to reform the Insurrection Act to prevent the very thing Rhodes advocated in his letter to Trump.

“Several Trump allies called on Trump to invoke the Act and deploy federal troops for the purpose of impeding the [presidential] transition,” Goitein wrote in a letter to the Select Committee.

“Moreover, members of the extremist right-wing group Oath Keepers, spurred on by their leader, Stewart Rhodes, believed that Trump would invoke the act and that doing so would enable them to join U.S. armed forces in preventing Biden from assuming office.”

Although the Brennan Center bills itself as nonpartisan, the conservative National Center for Public Policy Research contends it is one of “the most dishonest and aggressive voter fraud deniers” that received more than $7 million from George Soros’s Open Society Foundations from 2000 to 2010.

Citing a Supreme Court decision issued in 1827, Bright wrote that “the president’s decision to call forth the militia is extremely broad and entirely unreviewable.”

An 1895 Supreme Court decision stated, “If the emergency arises, the army of the nation, and all its militia, are at the service of the nation, to compel obedience to its laws,” Bright wrote.

Bright said the Oath Keepers case involves the intersection of “two vague, broad, centuries-old laws that ironically share similar characteristics. Seditious conspiracy proscribes conspiring to oppose the execution of federal laws, and the Insurrection Act can be used to quell such a conspiracy.

During an encrypted chat on the application “Signal,” Rakoczy wrote, Rhodes wrote “that President Trump ‘needs to know that if he fails to act, then we will. He needs to understand that we will have no choice.’ ”

The prosecutor urged U.S. District Judge Amit Mehta to limit what information the jury can hear about the Insurrection Act.