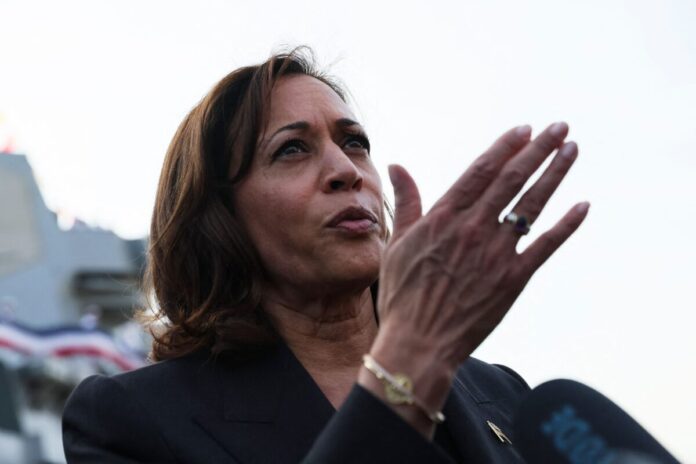 YOKOSUKA, Japan—U.S. Vice President Kamala Harris condemned on Wednesday “disturbing” actions by China in the Pacific while pledging to deepen “unofficial ties” with Taiwan, days after the U.S. administration pledged its forces would defend the island.

Harris made her remarks on the deck on the USS Howard destroyer during a visit to the largest overseas U.S. Navy installation in the world at Yokosuka, near the Japanese capital.

“China is undermining key elements of the international rules-based order,” said Harris, who is on a four-day trip to Asia.

“China has flexed its military and economic might to coerce and intimidate its neighbors. And we have witnessed disturbing behavior in the East China Sea and in the South China Sea, and most recently, provocations across the Taiwan Strait.”

The remarks to American sailors wearing dress whites come after U.S. President Joe Biden pledged in an interview aired on Sept. 18 to defend the self-ruled island of Taiwan against an “unprecedented attack.”

The United States subscribes to a “one China” policy that formally recognizes only Beijing but binds the U.S. government to provide democratically ruled Taiwan with the means to defend itself.

The Chinese communist regime claims the island as its own, despite Taiwan being a de facto independent country, with its own military, democratically-elected government, and constitution.

The Chinese Communist Party (CCP) has long vowed to bring Taiwan under its control and has not ruled out the use of force to do so.

Taiwan’s government strongly objects to the CCP’s sovereignty claims and says only the island’s 23 million people can decide its future.

U.S. House Speaker Nancy Pelosi visited to Taiwan in August, infuriating the CCP, which then carried out its largest-ever military exercises around the island.

Harris said U.S. forces would operate in the region “undaunted and unafraid” even as the United States expects “continued aggressive” actions by the CCP.

“We will continue to oppose any unilateral change to the status quo,” she said. “And we will continue to support Taiwan’s self-defense, consistent with our long-standing policy. Taiwan is a vibrant democracy that contributes to the global good—from technology to health, and beyond, and the United States will continue to deepen our unofficial ties.”

Wang Wenbin, spokesman at the Chinese foreign ministry, told a regular media briefing that the United States needed to return to the one China policy and “unequivocally make clear that it opposes all Taiwan separatist activities.”

Aides said Harris would work on a unified approach in a region where leaders have warily watched rising tension between the United States and China.

The base where Harris spoke is home to 24,000 military and civilian workers who could be called on in a regional conflict. It’s also the home of the USS Ronald Reagan, an aircraft carrier now in South Korea to participate in joint drills meant to deter North Korea. Harris will visit the demilitarized zone separating the Koreas on Thursday.

Biden is expected to hold his first face-to-face meeting as president with Chinese leader Xi Jinping during November’s Group of 20 meeting in Indonesia.

Before Harris spoke to the U.S. service members, she stepped below deck and was given a demonstration of the warship’s missile and anti-submarine capabilities.

A commander pointed at a digital map showing a hypothetical enemy, a “hostile country” he declined to identify.

“It’s not Guam,” he explained, referring to the Pacific territory.