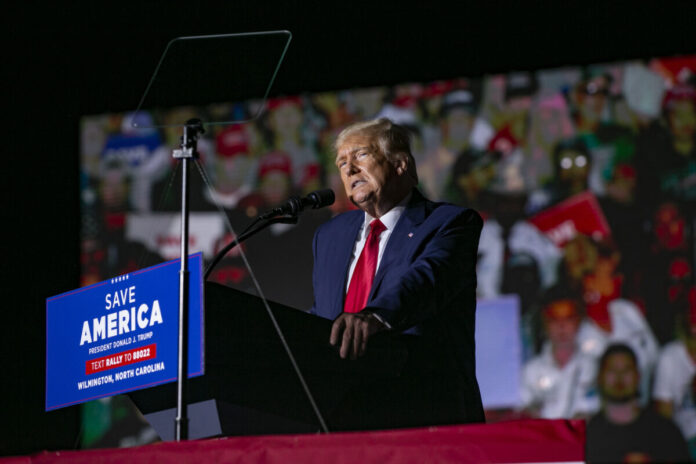 Former President Donald Trump rallied in North Carolina on Sept. 23, seeking to build support for candidates he has endorsed while denouncing “radical left” Democrat policies that he said were driving America to ruin.

Trump spoke for around 90 minutes at the Wilmington rally, urging North Carolinians to vote Republican in the upcoming mid-terms to prevent what he described as the country’s devastation under Democrat rule.

“This election is a referendum on Biden, Pelosi, Schumer, the radical left Democrat Congress that’s destroying our country, that’s brought our country really to the brink of ruin,” Trump said, drawing cheers from the spirited crowd.

“If you want the decline and fall of America, then you should vote for the crazy, radical left Democrats,” Trump said, adding that putting Republicans back in charge would “save the American dream” and stop “the destruction of our country.”

The former president touched on various themes in his speech, including the state of the economy, illegal immigration, and the corruption of Washington elites.

On inflation, Trump sought to draw a contrast between the price stability that was a hallmark of his term and the soaring prices under President Joe Biden.

“We had the greatest success in the history of any country,” Trump said. “Since I left office, the price of electricity is up 19 percent, gasoline is up 82 percent, fuel is up 91 percent,” he added, highlighting some of the more stunning figures that illustrate the cost-of-living crisis that is squeezing American households amid decades-high inflation.

“The 30-year mortgage rate has more than doubled and real wages have declined 17 months in a row—otherwise we’re doing quite well,” Trump added, eliciting laughter from the audience.

Trump also pointed to a record drop in U.S. household wealth in the second quarter and sharp stock market declines that have hammered Americans’ retirement accounts.

On border security, the former president suggested the number of illegal immigrants was far higher than official numbers indicate.

“Over 5 million illegal aliens have flooded across our borders and the number I think is a lot more than that,” Trump said, blaming what he described as Democrats’ lax border policies.

Recently, Border Patrol Chief Raul Ortiz said there has been a significant increase in illegal border crossers since Biden took office and acknowledged that the president’s policies have been the driving force behind the surge.

At the rally, Trump criticized North Carolina Gov. Roy Cooper, a Democrat, for vetoing a public safety bill earlier this summer that would have required sheriffs to determine the immigration status of inmates behind bars.

“North Carolina should be a sanctuary for law abiding Americans, not criminal aliens,” Trump said.

Trump also took aim at “the corrupt political class in Washington,” who he said “hates us because we beat their rigged system” and “toppled their entrenched power structure.”

Railing against the machinations of “globalists,” Trump pointed to “unfair” trade deals that were renegotiated on his watch on terms more favorable to the United States.

“We stood up to their open borders insanity, we confronted their sellout to communist China, and we rejected their ridiculous mandates,” Trump said, adding that his administration’s policies were about “America First, all the way.”

Trump predicted a red wave in the upcoming mid-terms.

“This November, the American people are going to show this repulsive political class exactly what we think of their lies, their witch hunts, and the corruption by voting in overwhelming numbers to throw them the hell out of office,” Trump said.

“We’re on a mission to rescue the America we love and restore the republic to greatness,” Trump said. “We’re not going to fail.”