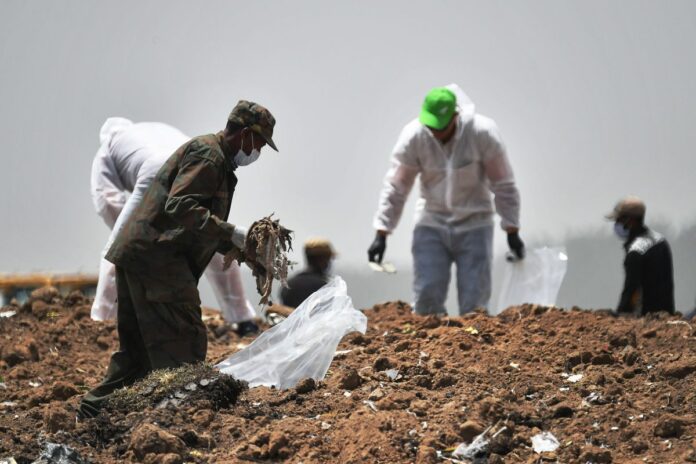 Boeing announced that it had reached a $200 million settlement with the Securities and Exchange Commission (SEC) after allegations that it deceived its own investors and the public about the safety of its best-selling 737 MAX jetliner.

The Boeing 737 MAX killed 346 people in two separate fatal crashes, forcing the Federal Aviation Administration (FAA) to ground the airplane for 20 months and only allowing it to fly again in November 2020.

The deadly crashes occurred in the waters off of Indonesia and in Ethiopia in late 2018 and early 2019.

“In times of crisis and tragedy, it is especially important that public companies and executives provide full, fair, and truthful disclosures to the markets,” said SEC Chairman Gary Gensler in a Sept. 22 statement.

Boeing shares have gone down 68 percent from their record high after the second crash in March 2019.

“Boeing and [former CEO Dennis] Muilenburg put profits over people by misleading investors about the safety of the 737 MAX all in an effort to rehabilitate Boeing’s image following two tragic accidents that resulted in the loss of 346 lives and incalculable grief to so many families,” said Gurbir S. Grewal, director of the SEC’s Enforcement Division.

The SEC alleged that after the first fatal crash of the jetliner, Muilenburg covered up the fact that a flight control function called the Maneuvering Characteristics Augmentation System (MCAS) was an ongoing safety hazard, but continued to assure that the 737 was still airworthy.

After the second crash, the former CEO and his colleagues at Boeing were found to have misled the public about lapses in the aircraft’s certification process concerning the MCAS automated flight control system, despite the fact that there was plenty of internal information acknowledging a problem, according to the SEC.

“Boeing and Muilenburg assured the public that there were no slips or gaps in the certification process with respect to MCAS, despite being aware of contrary information,” said an initial statement by the SEC in 2019.

The SEC soon heard of an alleged internal coverup by company management and of the investigation by the FAA, after the false statements made by the former CEO and Boeing executives to investors and the agency.

In response to the investigation, Muilenberg called the 737 MAX “as safe as any airplane that has ever flown the skies,” which immediately received a public rebuke from the FAA, causing strain on Boeing’s relationship with the regulator and humiliating the company.

Boeing fired its then-CEO in December 2019, after news of the inspection scandal broke and partially due to his comments regarding the 737’s clearance status by air safety regulators.

The SEC chair said that Muilenburg and Boeing “failed in this most basic obligation” to be “full, fair, and truthful in disclosures to the markets” and that “they misled investors by providing assurances about the safety of the 737 MAX, despite knowing about serious safety concerns.”

Neither the former CEO nor the aerospace manufacturer have challenged the agency’s findings, which accused them of putting “profits over people by misleading investors about the safety of the 737 Max all in an effort to rehabilitate Boeing’s image.”

Muilenburg was forced to pay a separate $1 million in a settlement with the SEC.

However, he will not face charges and the settlement does not require him to admit to any wrongdoing.

“Today’s settlement is part of the company’s broader effort to responsibly resolve outstanding legal matters related to the 737 MAX accidents in a manner that serves the best interests of our shareholders, employees, and other stakeholders,” Boeing said in a statement to CNBC.

The airline manufacturer had previously agreed to pay $2.5 billion to settle a separate criminal probe by the Justice Department, after two congressional hearings uncovered serious lapses in the 737’s manufacturing and approval process.

As part of that settlement, $500 million would be allocated to the families of victims who died in the two 737 crashes.

Current and former company directors reached an additional $237.5 million settlement with shareholders in 2021 over the board’s lack of oversight of the 737.

A few more trials are expected to be held in court in 2023 to resolve further claims.

Congress has since passed the Aircraft Certification Reform and Accountability Act to reform aircraft certification, giving the FAA more power to oversee the process.

The bill’s sponsor, House Aviation Subcommittee Vice-Chair Sharice Davids (D-Kans.) said in a statement, “The 346 victims of the Boeing 737 MAX crashes and their families expect and deserve Congress to act to make sure the mistakes that led to those tragedies never happen again.”

“This bipartisan bill will strengthen aviation safety and accountability and help pilots and flight crews do their jobs safely and efficiently. I was glad to see my House colleagues come together today to pass this critical legislation, and I urge the Senate to do the same,” she added in the Nov. 18, 2020, statement.

American, United, Southwest, and Alaska Airlines are the only U.S. carriers that fly the 737 MAX, while Delta, which ordered 100 of the 737 MAX 10 model of the plane, has yet to receive delivery.

Boeing shares fell about 7.45 percent at the end of the week’s trading.