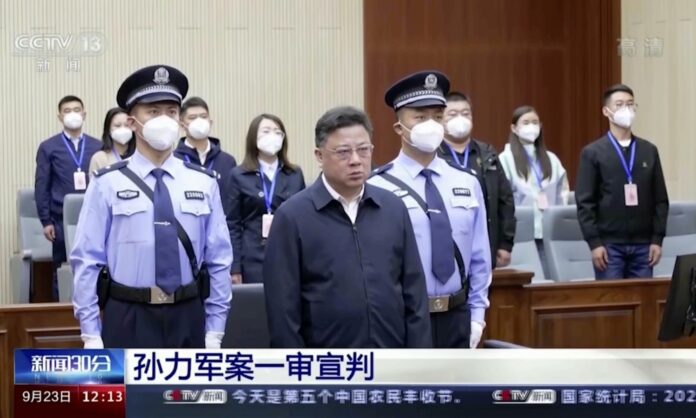 The Changchun Intermediate People’s Court in the northeastern province of Jilin handed down a death sentence, commutable to life imprisonment after two years, to Sun Lijun, a former vice minister of public security, for taking bribes, manipulating the stockmarket and illegal possession of firearms.

“After the expiration of the two-years reprieve, his sentence will be commuted to life imprisonment, with no possibility of commutation or parole, according to the court ruling,” the CCP-backed Global Times newspaper reported.

From 2001 to April 2020, Sun used the influence accumulated through past positions to seek gains for others and illegally accepted money and property worth 646 million yuan, the paper quoted the court judgment as saying.

In the first half of 2018, Sun manipulated related individuals to engage in stock market dealings, helping certain individuals to avoid losses of 145 million yuan, and was found in possession of two illegal firearms, it said.

Sun’s sentencing came a day after the same court handed the same sentence to former Beijing police chief Fu Zhenghua, after finding him guilty of “accepting bribes and bending the law for personal gain.”

From 2014 to 2015, when served as the director of the Beijing municipal police department, he concealed clues to his younger brother Fu Weihua’s alleged serious crimes, and did not deal with them in accordance with the law, enabling his brother to evade prosecution for a long time, the court said.

“It was decided that after his death sentence is commuted to life imprisonment upon the expiration of the two-year reprieve, he will be imprisoned for life without commutation or parole,” the court judgment said.

Commenting before Sun’s sentence had been made public, Xia Ming, professor of political science at New York’s City University said the timing of Fu’s sentence was no coincidence, and is intended as a warning to Xi’s rivals and detractors within the highest echelons of the CCP.

Xi will be seeking an unprecedented third term in office at the CCP 20th National Congress, which opens in Beijing on Oct. 16.

“I believe Xi Jinping still faces a certain amount of resistance within party ranks, because he is trying to break with the past 40 years of political tradition,” Xia told RFA.

“He wants [this] to have a political effect at a critical juncture, which is that those who obey him prosper, and those who oppose him fall,” he said.

Political commentator Wang Juntao agreed, saying Xi is preempting any political opposition, and hoping to stave off any challngers.

“Xi Jinping is doing this to create an atmosphere of fear in the party’s political and legal affairs system [which controls law enforcement],” Wang told RFA.

“It is likely that more senior officials and even Politburo members will lose their jobs, so as to intimidate other party members into staying loyal to Xi.”

“Sentencing those who have challenged Wang Xiaohong is supposed to force the political and legal affairs system to pledge absolute obedience and support for Wang Xiaohong,” Wang said.

Fu, along with recently sentenced provincial public security officials Liu Xinyun, Deng Huilin and Gong Daoan, are widely regarded as being in Sun’s “faction” of the CCP.

The Changchun court also said the seriousness of Fu’s crimes merited an out-an-out death penalty, but it had handed down a suspended sentence because Fu “confessed and repented,” as well as actively returning stolen assets and helping with “major clues in other investigations,” in a possible reference to the Sun Lijun investigation.