‘We Have to Quit Playing Games’ With Illegal Immigration 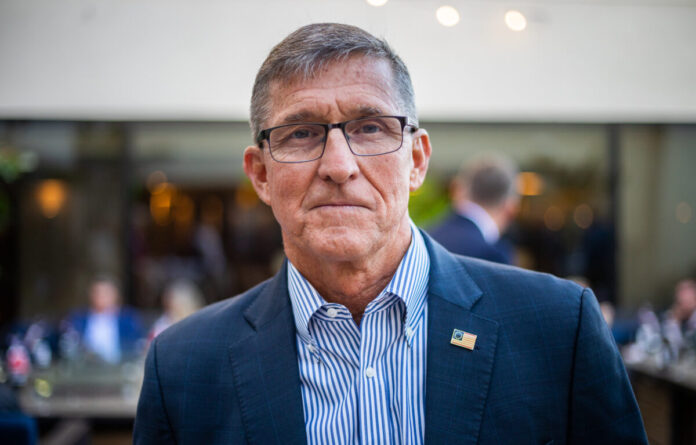 Retired Lt. Gen. Michael Flynn said he doesn’t agree with sending illegal immigrants to Martha’s Vineyard and Washington, D.C., but he understands the political reasoning behind the efforts of Florida Gov. Ron DeSantis and Texas Gov. Greg Abbott to draw more attention to the border crisis.

“It’s a horrible idea,” Flynn told The Epoch Times in an interview preceding a Republican fundraiser in Huntington Beach, Calif., on Sept. 18.

“I think that we should be sending all these illegals back across the border. I understand the [political] tactics … but essentially all they’re doing is exacerbating the problem. We have to quit playing games when it comes to the invasion of our country along our southern border,” he said.

If the Biden administration won’t stem the flow of unvetted illegal migrants across border, then the governors of border states have a duty to step in and deal with the problem, he said.

“The state of Texas does not have to accept these people. They can actually stop them there,” he said.

While the strategy of sending immigrants to sanctuary states or cities is shining a national media spotlight on illegal immigration, Flynn said, having an open-borders policy is a threat to national security and must be addressed.

He warned against putting unvetted “military age males on buses and into planes” and sending them to different parts of the United States.

“I would send them back. We need to send these people back because the problem is only going to get worse,” said Flynn who served as national security advisor to former President Donald Trump until he was implicated in the Spygate scandal.

With an estimated 4.9 million illegal immigrants entering the U.S. in less than two years under President Joe Biden’s watch, according to the Federation for American Immigration Reform, “we’re destroying the fabric of our county,” Flynn said. “We have too many.”

Like other critics of the Biden administration’s immigration policies, including former ICE director Tom Homan, Flynn said the crisis at the southern border is by design.

“This administration made a conscious decision to have open borders,” Flynn said. “Vice President Kamala Harris is out of her mind when she said that the border is secure. Talk about a strategic blunder—a political blunder.”

“This is so far beyond normal. This is not politics as normal in this country anymore. We have an attempted takeover of our country by a socialist movement, and they’ve got control of many of the levers of power in our country—the justice system, the rule of law system, our intelligence community,” he said.

American is headed down this path to socialism because too many Americans have become complacent, he said.

Still others are still so caught up in party politics and arguments over big government versus small that they’re missing the big picture, he said.

When asked who is behind the socialist takeover, Flynn replied, “Well, let them define themselves. You’re talking to a guy who was a lifelong Democrat. I just changed parties a little over a year ago.”

With gas prices soaring to more than $5 a gallon under the Democrats and even higher in California, Flynn said he misses former President Donald Trump’s energy independence policies.

Flynn credited Trump for supporting businesses and pushing back against the Environmental Protection Agency.

“He opened up the industries and he shut down all these environmental protection rules where people who own their own property that had the ability to take care of the environment couldn’t even put a shovel in the ground,” he said.

“They want to take over the world leadership now and into the remainder of this century, at least as far out as I can see,” Flynn said. “And that’s been their goal for the last 50 to 70 years.”

Secondly, China has its eyes on American resources, “principally energy, but also food production and water,” because the CCP knows America has managed its natural resources wisely, Flynn said.

Flynn pointed out that according to some estimates, such as from the Heritage Foundation, the U.S. has enough energy resources to supply power at current rates for the next 500 years.

“And then, the third big strategic goal is geography,” he said. “Because China has about 1.5 billion people, they could [eliminate] our entire population—the United States—and not even think twice about it.”

At the fundraiser, Flynn applauded Arizona Republican candidate Mark Finchem, who is running for secretary of state.

“There are so many problems with our election system,” Flynn said. “People have to understand how our constitution was designed, and Mark Finchem is one of those people who understands it.”

Some mainstream media coverage of Finchem and Kari Lake, who is running for governor in Arizona, has been “totally unprofessional,” Flynn said.

Steve Bannon, ex-advisor to Trump and host of War Room Pandemic, also attended the fundraiser along with more than 150 Republicans.

Brad Jones is an award-winning journalist based in Southern California.