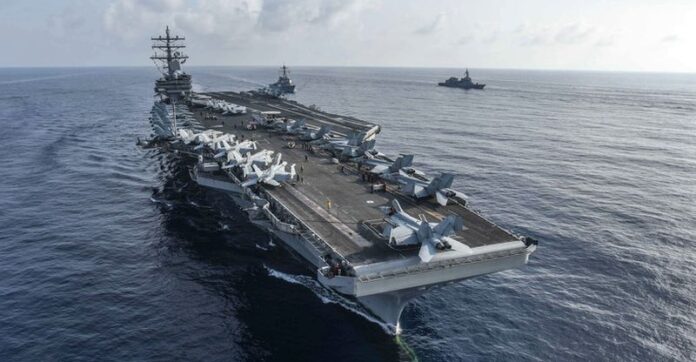 The U.S. Navy has deployed a nuclear-powered aircraft carrier to South Korea for a joint military exercise aimed at demonstrating their strong alliance amid North Korea’s nuclear threat.

The USS Ronald Reagan arrived at the southern port city of Busan on Friday, marking its first visit to South Korea in five years, the U.S. Navy said in a statement. It did not specify how long the ship would be in Busan.

Rear Admiral Michael Donnelly, commander of Carrier Strike Group 5, said the ship’s visit is “a clear and unambiguous demonstration” of the U.S. commitment to its defense alliance with South Korea.

The USS Ronald Reagan was last deployed to South Korea in 2017, involving two other aircraft carriers, for naval drills in response to North Korea’s missile tests. The drills were later reduced to make room for diplomacy with North Korea.

The ship’s recent deployment came after the two allies held a vice ministerial-level meeting of the Extended Deterrence Strategy and Consultation Group on Sept. 16, in which they expressed “serious concern” over North Korea’s nuclear law.

North Korea earlier approved a new law allowing it to conduct a nuclear strike against any “hostile forces” posing an imminent threat to the nation. North Korean leader Kim Jong Un said the law will make his country’s status as a nuclear weapons state “irreversible.”

In response, the United States and South Korea vowed to use “all available levers,” including diplomatic, informational, military, and economic instruments, to strengthen deterrence against the nuclear threat posed by North Korea.

They referred to the combined training of F-35A fighter jets in July and the deployment of the USS Ronald Reagan Carrier Strike Group in the region as “a clear demonstration of such U.S. commitment.”

“The United States and [South Korea] reaffirmed that [a North Korean] nuclear test would be met with a strong and resolute whole-of-government response,” they said in a joint statement.

North Korea has conducted a series of missile launches this year, including one involving its largest intercontinental ballistic missile, the Hwasong-17, all of which are banned under U.N. Security Council resolutions on Pyongyang’s missile program.

South Korea and the United States have repeatedly called on North Korea to denuclearize and return to diplomacy, a call that the Kim regime has ignored over what it calls “hostilities” from the United States and its allies.