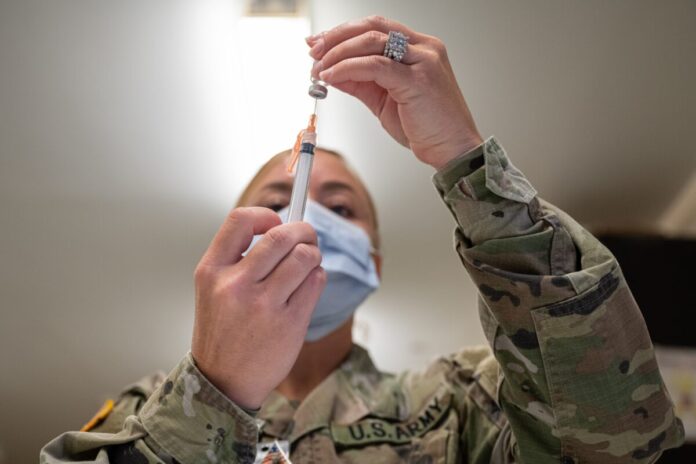 Forty-two military chaplains have sued the Department of Defense (DoD) over its vaccine mandate, arguing that it violates their Constitutional rights to freedom of belief and other laws protecting religious freedom.

Vietnam War veteran and attorney Arthur A. Schulcz Sr. who is representing the chaplains said the chaplains are seeking a preliminary injunction to bar the vaccine mandate across all branches of service. Thus far, federal judges in other cases have issued preliminary injunctions to the Air Force, Navy, and Marines preventing them from punishing service members in those branches who have sought religious exemptions to the vaccine mandate.

The lawsuit, filed in the district court for the Eastern District of Virginia on Aug. 15, is the first legal action by only a group of chaplains who seek to challenge the vaccine mandate on the grounds of religion, according to Army Capt. Andy Hirko, one of the plaintiffs in the suit. Hirko spoke to The Epoch Times, emphasizing that his views are his own and do not reflect those of the Department of Defense or the Department of the Army.

Having been a pastor for 20 years and an Army chaplain for the previous 20 months, Hirko considers the lawsuit a bellwether case on the resiliency of the Religious Freedom Restoration Act.

Hirko said he is the only unvaccinated chaplain seeking religious accommodation to the mandate at Fort Campbell, home of the elite 101st Airborne Division. He said he was “honored to stand shoulder to shoulder with the other 41 plaintiffs who want to serve God and country.”

As he pressed on to take a stand against the military’s vaccine mandate, he discovered that “there are many, many other chaplains across the different branches [of the military] that also want to serve God and country and wanted to make sure that religious freedoms were also protected.”

“All 42 of us are fighting for not only our own religious freedoms and convictions in the military, but also for all the service members that we serve,” Hirko said, adding that “if we can’t ultimately help other service members in this fight, we don’t believe that we’ve done our job.”

The chaplains in this case are “united” and “praying through it,” he said. “We’re trying to do everything we can to make sure America’s service members are taken care of,” he added.

There are many reasons why service members are refusing the vaccine, including an objection to the use of aborted fetal cell lines used in testing and development, the use of mRNA “gene therapy,” its experimental nature, and others, said Hirko. “For those of us who stand firm against the vaccine, we don’t’ believe it’s too much to ask to serve our country without having to compromise our religious convictions.”

Schulcz agreed, saying that “the liberty Hirko—and each of the other chaplains—enjoy was given to them by God and the Constitution offers protection of such liberty with the First Amendment.”

“The government should be neutral towards religion and not hinder it,” the attorney said.

“Everyone has a right to follow his conscience, which is in fact, a religious issue,” Schulcz added.

In one of the lawsuit’s causes of action, the plaintiffs argue that “the Department of Defense has failed to implement Section 533 of the 2013 National Defense Authorization Act (NDAA) since its inception,” Schulcz said.

“Section 533 established the right of military personnel to follow their conscience as long as it did not impact on good order and discipline,” he said, adding that “it protects chaplains’ decisions that emanate from their conscience as formed by their faith.”

Any retaliation against chaplains is forbidden by section 533, Schulcz contended. This includes blanket denials of religious accommodation requests, promotion requests, and training opportunities,

The attorney likened the spirit of the chaplains’ legal fight to that embarked by the country’s Founding Fathers.

“Our founding document, the Declaration of Independence, is actually a declaration of dependence on the God who formed the conscience of our Founders,” Schulcz said.

“Their conscience told them that their treatment by Great Britain and King George offended their understanding of who they were as men and women, created in the image of God. It also violated their rights as Englishmen, and it was their duty was to oppose such a tyranny.”

Like the nation’s Founders, the chaplains are “appealing to the Supreme Judge of the world for the rectitude of our intentions in accord with their conscience as formed by their faith,” Schulcz said. “They too are fighting a tyranny hostile to people of faith.”

A hearing is scheduled for 10 a.m. on Sept. 28 in courtroom 701 at the Eastern District of Virginia courthouse in Alexandria, Virginia. Hirko and Schulcz are inviting the public to attend the court hearing if they wish to show support for the chaplains in their fight against the vaccine mandate. The address is 401 Courthouse Square, Alexandria.

The Epoch Times has reached out to the Pentagon for comment.

J.M. Phelps is a writer and researcher of both Islamist and Chinese threats. He’s on Twitter at @JMPhelpsLC