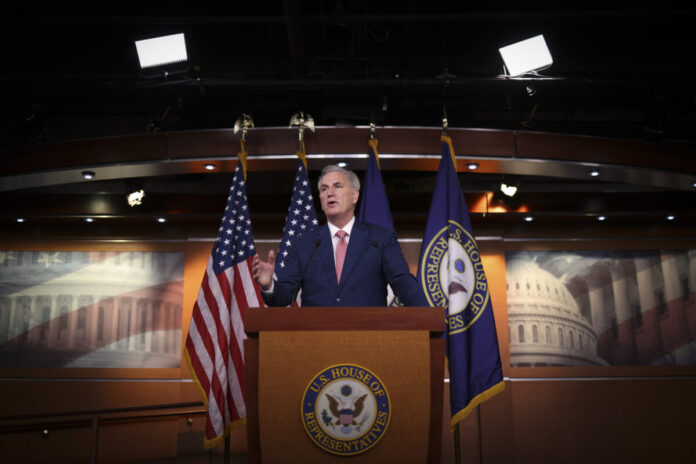 Conservative analysts gave House Minority Leader Kevin McCarthy’s (R-Calif.) “Commitment to America”—a legislative agenda if Republicans gain control of the House in the November midterms—a mixed reception based, in part, on the lack of specifics to get the United States’ economic woes under control.

The country is facing historically-high inflation, a slowing economy, demographic problems such as an aging workforce, and a ballooning budget deficit to go along with an unprecedented national debt that could burst into an economic crisis at any moment, said some experts, who believed McCarthy should do more to recognize that.

While the overall reception among the analysts was positive, some called for specific improvements to the platform to address problems immediately, and not just leave those issues to the next Congress.

Former Speaker of the House Newt Gingrich, however, praised the release of the plan, saying it represented the restoration of the role of Congress.

“I always tell members of the House that they work with the presidents, that they don’t work for the presidents,” Gingrich told the Epoch Times, adding that he made himself available to GOP House members as they developed the platform this year.

Gingrich is widely credited with the takeover of the House in the 1994 midterm elections using his “Contract with America,” a legislative agenda that committed the Republican Party to certain actions if they won a majority in that chamber.

In a 1994 speech at the steps of the Capitol, Gingrich in introducing the agenda said that there was “no comparable congressional document in our two-hundred-year history.” The plan sought to roll back government, make the government more accountable for results, and stem the tide of 60 years of New Deal politics.

This time around, however, the 79-year-old, now a history professor, isn’t claiming authorship.

“I think Kevin McCarthy was very aware of the ‘Contract [with America]’ and we’ve known each other and talked for more than 20 years, for sure, but this is a House document developed by the House members,” said Gingrich.

While supportive of the agenda, political consultant Dick Morris said he was worried that the document didn’t address the damage that would be done to the country between now and swearing in of the new Congress in 2023, anticipating a GOP takeover in the midterm elections.

“It leaves out the key question of whether the Republicans are going to stand and fight the current budget plan by passing a continuing resolution to the end of the fiscal year,” Morris told The Epoch Times.

Morris would like to see the House GOP fight Democrats’ spending plans with continuing resolutions that don’t fund things that the Democrats have proposed such as the adding of 87,000 new IRS agents and “$900 billion in anti-inflation” spending that he said could very well fuel further inflation right now.

“What the Republicans need to do is to say we will only pass a continuing resolution that expires when we take control of the House, expire after January, and the new Republican Congress that will review and stop the Biden spending plan,” said Morris.

Otherwise, Republicans are simply punting the issues to the new Congress and allowing the Democrats to ratify their existing plans, he added.

Former U.S. Comptroller General David Walker, who headed up the Government Accountability Office, went a little deeper with his criticism of the House GOP plan.

“They said that they’re going to get spending under control, but they have no specifics and without specifics, it’s not credible,” Walker told The Epoch Times.

Walker favors a calling for a constitutional convention to address a balanced budget amendment, which, according to him, would solve the problem of reckless spending at the source and inhibit Washington’s ability to embark on spending campaigns, such as in the student loan forgiveness scheme.

“No president should have the right to give away half a trillion-to-a-trillion dollars in federal assets, and effectively engage in backdoor spending to that extent,” he added.

‘Can’t Let the Perfect Be the Enemy of the Good’

Ken Blackwell, the former Ohio Treasurer and Ohio Secretary of State, who worked with Gingrich on the original “Contract with America,” cautioned that Republicans who wait for the perfect plan risk not making the contrast with the Democrats that the GOP needs to advance right now, before the midterms.

“I will tell you as one who worked with Newt Gingrich and his members of the Republican conference back in the early 90s, as they framed their ‘Contract for America’ that it didn’t have all the specifics, but it was a concrete plan of action, it was a commitment to the American people,” said Blackwell.

“So we can’t let the perfect be the enemy of the good,” he added.

Blackwell contrasted McCarthy’s plan with the strategy of the GOP in the Senate, which he said is to have no plans.

“It’s in direct contrast with the [GOP] Senate in that the House has crafted a package of initiatives that it’s committed to do. So I am not going to browbeat these Republican members of the House because this is not a perfect package,” concluded Blackwell.

Gingrich was a bit more generous with the GOP Senate.

“I think even [Senate Minority Leader Mitch] McConnell has something positive to say” about the “Commitment to America,” Gingrich said, adding that the Commitment is more about what the Republicans must do after gaining responsibility.

“I think the job of the Republicans, if they become a majority, is to offer a series of bills that are so popular with the American people that either Biden signs or he puts himself in a position” clearly against the will of ordinary Americans, the former speaker concluded.

The Epoch Times reached out to McCarthy’s office for comment but did not receive a reply by press time.