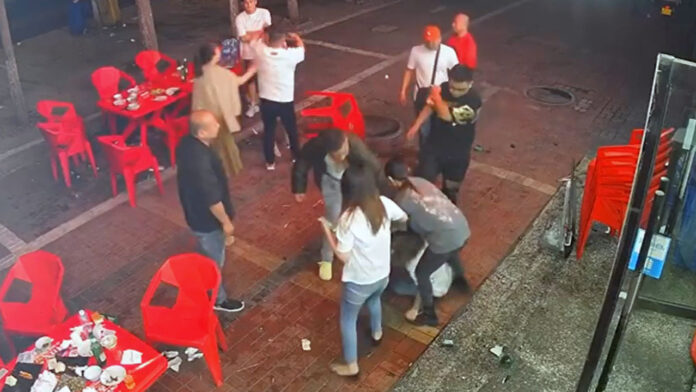 A court in the northern Chinese province of Hebei has jailed a man for 24 years in connection with the vicious beatings of several women at a barbecue restaurant in June.

“Defendant Chen Jizhi, the prime culprit involved in the harassment and brutal beating of four women at a barbecue restaurant in Tangshan … was sentenced to 24 years in prison and fined 320,000 yuan (U.S.$45,215),” the Global Times quoted the Guangyang District People’s Court in Hebei’s Langfang city as saying.

The case sparked international headlines and domestic public anger after surveillance video of the incident showed four women who had been eating at a late-night barbecue restaurant being brutally attacked by a group of men in the early hours of June 10, after one of them harassed a woman, who flapped a hand at her harasser and fought back after she was slapped, prompting the others to join in to repel the man.

The remaining 27 defendants were given jail terms ranging from six months to 11 years, with 19 of them issued with fines ranging from 3,000 to 135,000 yuan, the report said.

“Chen Jizhi, the prime culprit and other five defendants will correspondingly compensate the four victims for costs incurred for medical treatment, nursing, food subsidies, transportation and other losses,” the paper reported.

The court heard that Chen attacked one woman surnamed Wang after she “declined his inappropriate approach,” the Global Times said.

“Later, Chen and other defendants attacked and kicked the four women using chairs and wine bottles, and one of the defendants even threatened victims not to report the incident to the police,” it said.

The attackers can also be seen in the video footage dragging one of the women out of the restaurant to continue beating her outside. One was taken away on a stretcher with a visibly bloodied and swollen face.

The initial claim that the women sustained “minor injuries” was met with skepticism on social media, where many comments said the penalty was too lenient.

“I feel sad for my country, and sad for Tangshan,” one comment read, to which one social media user replied: “Shouldn’t the most important thing be to feel sad for the victims?”

Another commented on footage of Chen weeping as the sentence was read out: “He cries like that because he’s afraid of going to jail, not out of sincere remorse. He’s unworthy of our sympathy.”

Much of the public outrage at the time of the attack focused on the fact that nobody watching intervened to stop the subsequent, vicious beating of the women who fended off the initial assault, which left four women injured, two of whom were hospitalized.

Rather than engage with public criticism of state-enabled male violence, the official response has focused on allegations that the attackers were members of a local organized crime gang with links to the local police department.

On the social media platform Weibo, where a report from state broadcaster CCTV garnered 1.2 million likes, user @everyday3kmbaseline commented: “How could such a big fish slip through the net? Could they have done so without someone [in the government] protecting them?”

User @Taikoo Artifacts said the jail term was a response to “unstoppable public opinion,” praising the official response, while @YuYanyan wrote: “No parole, no parole, no parole,” and @hair_never_grows commented: “Only 24 years in prison.”