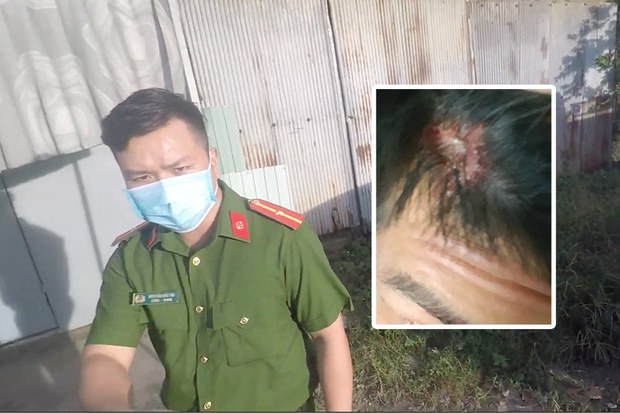 A Vietnamese YouTube content creator told RFA that local police in Ho Chi Minh City beat him twice and destroyed his camcorder, adding that he has been bleeding and experienced nausea and vomiting the day after the beating.

He told RFA that communal police in the Tran Phu Trung district attacked him while he was making a fishing video on Monday. Son said he went fishing at a lake that also grows lotuses at the Tan Phu Trang industrial park, hoping to capture content that he would later put on his YouTube channel.

“A police officer slapped me two or three times and then held me so that the security guard could beat me. The three cops were very big while I was small. They hit me on the head and threatened me. While beating me the guard screamed ‘Give me your address, I’ll come kill your parents!’” Son said, recounting the details of the incident.

Son says the police then subdued him and took him to the commune headquarters, where they confiscated the GoPro5 that he uses to create YouTube content, two cellphones, and his motorcycle before leaving. When other officers were assigned to deal with his case, Son says they asked him to write a report about the incident, which he refused to do, and demanded to know why he was violently beaten while he had not committed a crime.

“At the police station, I was beaten again. They hit me a lot on my head and my arm with their bare hands. A police officer named Tai hit me and kicked me. Another strangled me and one who appeared to be the boss elbowed me in my face. Then they handcuffed me, knocked me down to the floor and dragged me to a room nearby and left me alone there.”

As Son shouted for help, a woman heard him and informed his mother, a local teacher. When Son’s mother, Nguyen Thi Ty, arrived at the headquarters, he said police agreed to remove his handcuffs and then repeated their request for him to write a report about the incident, where he would admit to “illegally” fishing at the park.

Son says the police added that they would return all his belongings on condition that he deleted the videos of them beating him.

When police returned his belongings, they asked him to fill out a handover note. However, Son says some parts of his GoPro 5, which costs VND4 million (around USD $170), were destroyed.

When the officers left for a break while he was filling out his paperwork and did not return, Son and his mother left the station. Another group of police officers, however, stopped him from going to the hospital to treat his injuries, he said.

One of the officers, surnamed Hai, asked Son to return the handover note that he filled out at the police station, threatening him with charges of “stealing state data” if he refused.

In a video filmed at Son’s home, Hai, who was in uniform, denied having beaten Son.

RFA contacted the Tan Phu Trung commune police office to verify the incident. However, the officers who answered the phone said they could not provide a response unless a reporter came directly to their office.