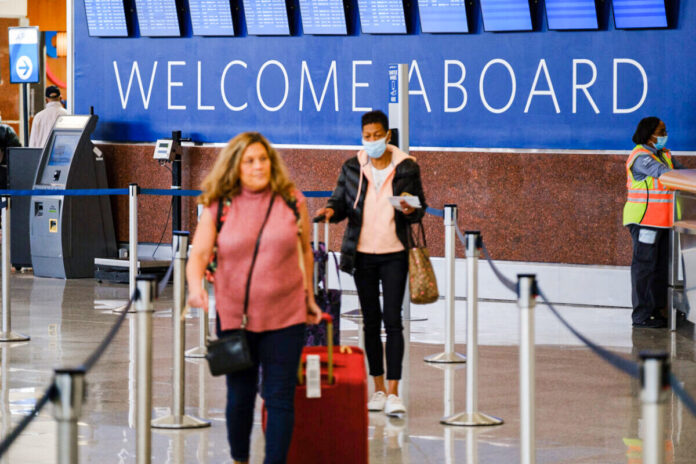 Ticket prices for flights have risen 25 percent this year, the biggest annual jump since 1989.

Airlines have not made much of a profit from higher ticket prices, however, due to rising operational costs being passed down to the consumer.

A combination of a rise in post-pandemic travel demand, coupled with airlines with 15 percent less capacity than in 2019, led to less available seats on flights.

Airlines and airports have drastically reduced their staff of pilots and support crews over the last two years, leaving them with personnel shortages and flight cancellations after restrictions were lifted.

This was on top of airline industry’s already existing debts, which were high well before the pandemic, leading to additional price spikes.

Meanwhile, continued labor shortages and supply-chain issues are also having an affect on airfare prices because they’re reducing the capacity for maintenance, repair, and overhaul.

This has made it harder for airlines and lessors to return airplanes grounded during the pandemic, as demand for available aircraft rebounds faster than they can be made available.

“And given the financial state of many airlines … It’s not that airlines are making money, [they] are just passing on a cost that they can’t absorb themselves and that they can’t avoid,” said William Walsh, the director-general of the International Air Transport Association (IATA) in an interview with CNBC on Sept. 21.

Walsh also said that a drop in refining capacity during the pandemic and an increase in demand for fuel are another major concerns for the airline industry.

Refining capacity in the United States tumbled by 5.4 percent this year since from its peak 2019 during the Trump administration, the lowest in eight years.

The decline in fuel production came after several refineries shut down and after major pressure by the Biden administration to convert jet fuel plants toward producing more renewable alternatives.

However, the IATA director is largely on board with President Biden’s eco-friendly plan to boost investment in the production of sustainable aviation fuel rather than expanding traditional refineries.

“Sustainable aviation fuels do represent the best option that the industry has to achieve our target of net zero by 2050,” said Walsh.

The IATA announced its sustainable energy goal in October 2021 for the world’s airline industry to achieve “net-zero” carbon emissions by 2050.

“The world’s airlines have taken a momentous decision to ensure that flying is sustainable. The post-COVID-19 reconnect will be on a clear path toward net zero,” commented Walsh on the organization’s website.

“With the collective efforts of the entire value chain and supportive government policies, aviation will achieve net zero emissions by 2050.”

Not all aviation executives, however, are fully on board with the airline association’s global sustainability vision.

“If we are pushed to do that, you as a passenger are going to pay for it,” Qatar Airways CEO Akbar Al-Baker told CNBC.

“I have no issue [paying] a bit more, but they cannot pay four or five times the price of a normal F-gas,” he said, in reference to industrial fluorinated gas, commonly used in air refrigeration.

The airline CEO did not totally oppose further investments in alternative fuel, and said that he actually supports it.

He told CNBC that Qatar Airlines is “ready to invest in sustainable aviation fuel,” on the condition that it is “reasonably priced.”

Others are also hesitant regarding the push for sustainable aviation fuel on the industry.

Djebbari said that flight prices could rise “in the short term” due to the energy shortages.

Russia and the Future of Airline Travel

Another factor that may contribute to even higher ticket prices, according to Al-Baker, is the escalation of the conflict between Russia and Ukraine.

Russian President Vladimir Putin announced a partial military mobilization of Russia’s armed forces on Sept. 21, putting the country and its economy on a wartime footing by diktat.

Airfares had already surged 18.6 percent in April after the conflict in Ukraine began, according to the Bureau of Labor Statistics.

Many airlines are troubled about this escalation in the conflict, due to the danger to already tight energy supplies and as a major disruption to flight plans.

“For me, the biggest worry is the conflict spreading, which [will then] fuel inflation, putting more pressure on the supply chain,” said the airline CEO to CNBC and that China’s lockdowns are the “smallest of [his] worries.”

“The net result will be less passengers in my aeroplane,” he said, but that “it also worries me … the [instability] of the oil price, which I don’t want to pass to the passengers, which will then discourage them from travelling.”

Oil prices rose more than 2 percent after the Russian president announced the mobilization, due to fears that he conflict will get out of hand.

Al-Baker told CNBC that his airline will still fly to Russia as long as it is operationally safe to do so.

Share
Facebook
Twitter
Pinterest
WhatsApp
Previous articleUK Will Be ‘Fully Equipped’ to Tackle Challenges From China and Russia: Truss
Next article‘Silent Majority’ Must Speak Up When Vocal Minority Imposes Views on Society: Rapper and Commentator