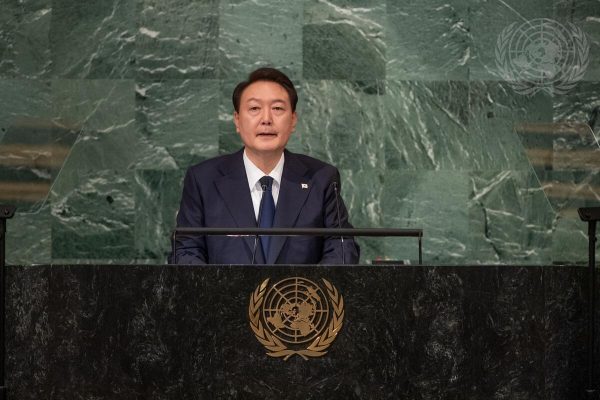 South Korean President Yoon Suk-yeol made his debut at the United Nations General Assembly on Tuesday. As the 10th keynote speaker, he delivered an 11-minute address, half the length of his predecessor Moon Jae-in’s speech in 2017, and focused on a message on “freedom” and “solidarity.”

“Today, the global community is yet again witnessing the freedom and peace of its citizens put in jeopardy. Attempts to alter the status quo by force endangers the lives of innocent people; nuclear weapons and other weapons of mass destruction pose an increasing threat to humanity; systemic violations of human rights leave millions of children deprived of their future,” Yoon said.

He added that “such threats to freedom and peace must be overcome through solidarity and fearless commitment to the framework of universal global norms consolidated over the years within the U.N. system.”

The main theme of the U.N. General Assembly this year is “A Watershed Moment: Transformative Solutions to Interlocking Challenges.” For Yoon, as a leader of South Korea, North Korea’s nuclear and missile threats are the main challenge he has faced since taking office in May. However, he skipped mentioning North Korea during his speech – which could be his strategic decision so as not to provoke Pyongyang more. The North Korean regime has already shown its extreme distaste for both Yoon personally and his “audacious initiative,” his administration’s official policy on North Korea.

Instead, Yoon focused on his role as the leader of a free country, tapping into growing rhetoric about an ideological competition between democracies and autocracies around the world. “The crisis confronting us will only be resolved when we stand firmly in solidarity to share the universal value of freedom and work together to uphold and spread our freedom,” Yoon said. He used the word “freedom” 18 times in the English-language transcript.

He defined “genuine freedom” as “not just being free from the shackles but having opportunities to live life to the fullest with dignity.” Likewise, “Genuine peace is not an absence of war but removing conflict and enmity that hold back shared progress of humanity and building the foundation for greater prosperity,” Yoon said.

After the speech, Yoon held a 30-minute meeting with U.N. Secretary-General Antonio Guterres and shared his vision to tackle North Korea’s nuclear and missile programs. According to Kim Eun-hye, a senior secretary for press affairs, Yoon expressed his gratitude to Guterres for his initiative and asked him for support in uniting the international community in response to a future North Korean nuclear test. Guterres assured Yoon that the United Nations Security Council would make a firm response to any provocation threatening freedom and peace, but it is questionable how he could draw united support when China and Russia oppose imposing more sanctions against North Korea.

Beyond Yoon’s actual U.N. interactions, the big question is whether he will meet with Japan’s Prime Minister Kishida Fumio.

Last week, Kim Tae-hyo, the first deputy director of the National Security Office for Yoon, announced that Tokyo agreed to Seoul’s offer to hold a summit meeting on the sidelines of the United Nations General Assembly. However, hours after Seoul’s announcement, Tokyo denied it by saying that nothing had been arranged for a meeting between the leaders. According to a report of the Asahi Shimbun on Wednesday, Kishida expressed “strong displeasure” over South Korea’s unilateral announcement, demonstrating how eager Seoul was to schedule the summit meeting. Asahi quoted a government official as saying that Kishida decided not to move forward with the meeting after Yoon’s office made the premature statement.

As of this writing, Seoul and Tokyo still have not fixed the schedule for the summit meeting.

While no announcement on the Japan-South Korea summit meeting was released, South Korean Foreign Minister Park Jin met his Japanese counterpart, Hayashi Yoshimasa, on Monday in New York. Park told reporters that the two sides agreed to improve bilateral ties with sincerity but did not share details on the schedule of the summit meeting.

Instead, South Korean domestic news outlets reported, Park explained Seoul’s alternatives regarding the 2018 ruling of South Korea’s Supreme Court, which ordered the wartime Japanese corporations, Mitsubishi Heavy Industries and Japan’s Nippon Steel & Sumitomo Metal, to pay compensation to forced laborers and their families. The Japanese corporations have refused to abide by the ruling. In this context, the court ordered the liquidation of corporate assets of Mitsubishi Heavy Industries, snowballing Tokyo’s antagonism toward Seoul.

Japan claims that all historical disputes with South Korea – including forced labor as well as sexual abuse of “comfort women” – have been settled by the 1965 Treaty and the 2015 Comfort Women Agreement. However, Tokyo has never delivered sincere apologies directly to the victims and continues to distort the historical facts in the government-designed textbook for young Japanese students. Even after the Comfort Women Agreement was made in 2015, then-Japanese Prime Minister Abe Shinzo publicly reiterated a deceptive talking point, saying that the comfort women were not forcefully taken by the Japanese military.

The intention behind such claims is to give the impression that the “comfort women” were prostitutes who sought to earn money, not the victims of sexual slavery. This flies in the face of objective evidence and analyses found by Japanese scholars showing that South Korean comfort women were coerced or tricked into sexual service to the Japanese military.

Tokyo has not changed its stance on the historical disputes with South Korea as hawkish conservatives have been the mainstream within the ruling Liberal Democratic Party following the election of Abe in 2012. However, unlike the previous Moon administration, the current South Korean administration is actively reaching out to Japan to restore the frozen ties between the two countries.

With the retirement of the chief judge in the case of forced labor by Japanese corporations, Seoul has secured time to negotiate with the victims and Japan to resolve the issue. Under the sacred principle of the separation of powers, no parties can reverse the court’s decision in South Korea, but Yoon’s Foreign Ministry has been struggling to prevent the Supreme Court’s rulings from being enforced – even though Tokyo has shown no willing to budge from its far-right stance on the historical disputes.