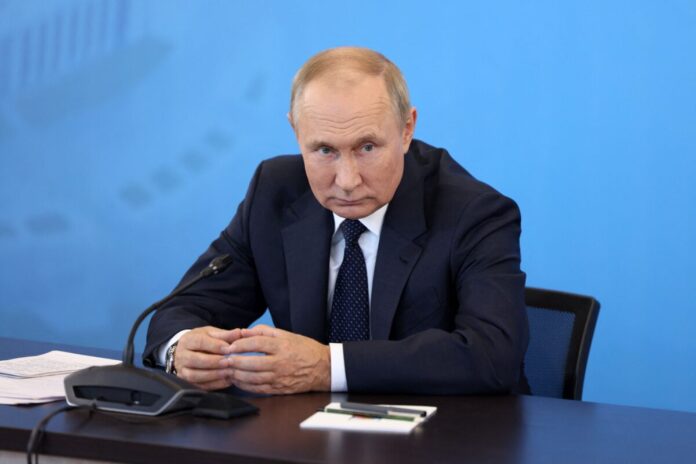 Russian President Vladimir Putin on Sept. 21 ordered the partial mobilization of the Russian army, the first military call-up of its kind since the Second World War.

The announcement came less than 24 hours after pro-Russian leaders in four Ukrainian provinces announced plans to hold referendums on leaving Ukraine and joining the Russian Federation.

The twin developments, which drew swift condemnation from Ukraine and its allies, appear to have surprised many observers.

“Clearly it’s something that we should take very seriously because, you know, we’re not in control. I’m not sure he [Putin] is in control either,” British Foreign Office Minister Gillian Keegan said.

“This is obviously an escalation,” she said.

Pro-Russian leaders in Donetsk, Luhansk, Kherson, and Zaporizhzhia announced plans on Sept. 20 to hold separate referendums on whether or not to join Russia.

All four polls are slated to be held within days, between Sept. 23 and 27.

Since Moscow launched it “special military operation” in Ukraine on Feb. 24, Russian forces and their local allies have taken almost all of Luhansk and roughly 60 percent of Donetsk, the latter of which remains the scene of intense fighting.

Only days before launching its operation, Moscow formally recognized both provinces as independent “people’s republics.”

Together, Luhansk and Donetsk comprise eastern Ukraine’s Russian-speaking Donbas region, which has been the primary focus of Russia’s invasion.

Russia and its allies also hold most of the southern Zaporizhzhia province and almost all of neighboring Kherson province, including the latter’s regional capital.

Russian Foreign Minister Sergei Lavrov defended the decision, saying, “The peoples of the respective territories should decide their fate.”

Kyiv and most western capitals, however, have roundly condemned the move.

“Ukraine has every right to liberate its territories and will keep liberating them whatever Russia has to say,” he said.

Over the last 10 days, Ukrainian forces have achieved notable gains on the battlefield, retaking positions in the northeastern Kharkiv region, which sits adjacent to Donbas.

While Kyiv portrays its ongoing counter-offensive as a “turning point” in the conflict, Russian officials have downplayed its strategic importance.

Kyiv says it will never accept Russian occupation of its territory, while continuing to call on its western allies to supply it with increasingly advanced weaponry.

The European Union likewise condemned the planned polls, vowing not to recognize the results.

“Russia, its political leadership, and all those involved in these ‘referenda’ and other violations of international law in Ukraine will be held accountable,” EU foreign policy chief Josep Borrell said in a statement.

He went on to warn that “additional restrictive measures against Russia would be considered” in light of the circumstances.

In a 2014 referendum, the Black Sea region of Crimea, which shares a border with Kherson province, voted to leave Ukraine and join Russia.

Unrecognized by all but a handful of countries, the Crimea poll came on the heels of Ukraine’s “Maidan Revolution,” which swept President Viktor Yanukovych, who was known to be close to Moscow, from power.

In a televised address, he said the decision was prompted by challenges posed by a roughly 1,000-kilometer-long frontline, and the fact that Russia was engaged in conflict with “the entire western military machine.”

Putin also denounced what he described as “pronouncements by representatives of leading NATO countries about the possibility and admissibility of using weapons of mass destruction against Russia.”

Speaking after a major summit of Eurasian leaders in Samarkand on Sept. 16, Putin alleged that western powers sought the breakup of Russia into ineffectual statelets.

According to Russia’s defense ministry, the fresh mobilization is set to activate 300,000 reserve troops with previous military experience.

There is little doubt that the incorporation of Luhansk, Donetsk, Kherson and Zaporizhzhia into Russia—as happened in Crimea in 2014—would profoundly alter the nature of the conflict.

In a Telegram post, Dmitry Medvedev, deputy chairman of the Russian Security Council (and former Russian president), said: “Encroachment onto Russian territory is a crime which allows you to use all the forces of self-defense.”

He added: “This is why these referendums are so feared in Kyiv and the West.”

Despite the escalations, Ukrainian President Volodymyr Zelenskiy appeared upbeat. “The situation at the front clearly indicates the initiative is with Ukraine,” he said in a Sept. 21 video address.

US Ambassador to Ukraine Bridget Brink, for her part, described the moves by Moscow as “signs of weakness, of Russian failure.”

China, meanwhile, whose leader Xi Jinping just met Putin in Samarkand, responded to the crisis by calling for “dialogue and consultation” and “a way to address the security concerns of all parties.”

Speaking on the sidelines of a UN General Assembly meeting in New York, Turkish Foreign Minister Mevlet Cavusoglu said the latest moves by Moscow “demonstrate the seriousness of the situation.”