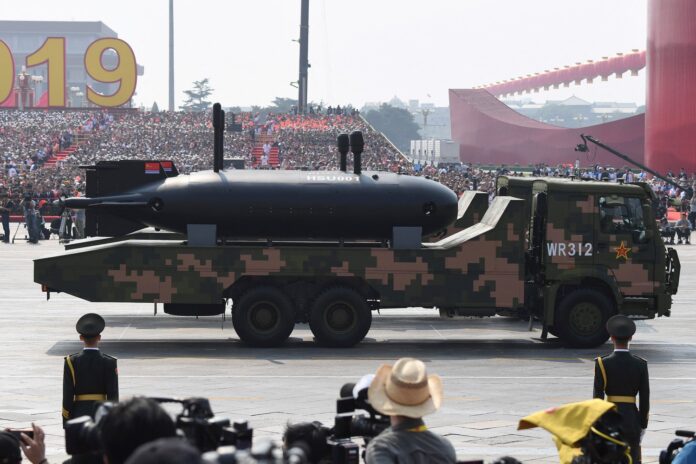 Besides aerial unmanned vehicles (UAVs), or drones, China has also been developing submersibles, both manned and unmanned, which are easily applicable for military use.

A new report in Naval News, a publication focused on global naval developments, said the People’s Liberation Army Navy (PLAN) had been building extra-large uncrewed underwater vehicles (XLUUVs) under a “key program” that was until now unreported.

Citing satellite imagery provided by Maxar Technologies, the report said two XLUUVs were spotted recently at a PLAN base in Sanya, Hainan island.

Sanya is one of the most important naval bases of the Chinese Navy, responsible for deployments and activities in the disputed South China Sea.

Beijing claims historical rights to most of the South China Sea despite protests from other countries in the region and has been developing artificial islands to back up its claims.

The two submersibles have been at the Sanya base since March or April last year, the report said, adding that they may be awaiting trial.

“This may be the first indication of a much larger program,” it said.

XLUUVs, also called drone submarines, have already been developed by the navies of both the U.S. and the U.K., and China seems to be pursuing its own program.

China already has the largest navy in the world by number with approximately 355 ships and submarines, according to the Pentagon.

Yet the PLAN has only 12 nuclear-powered submarines compared to the U.S.’s 72.

The bigger the drones are, the longer the range over which they can operate. XLUUVs could also be utilized in minelaying, transportation, and even hunting enemy surface ships or submarines.

In Oct. 2019 China publicly revealed for the first time a number of its unmanned underwater vehicles (UUVs) – HSU001- at a military parade to mark the 70th anniversary of the founding of the People’s Republic of China.

Military experts at that time said that the UUVs would be tasked with collecting intelligence and reconnaissance, mostly underwater.

Lyle Goldstein, a Research Professor in the China Maritime Studies Institute (CMSI) at the U.S. Naval War College, wrote in a blog that the mission areas of the submersibles would be seabed warfare, support for special operations such as in a Taiwan invasion scenario, and protection of Chinese remote bases in the South China Sea.

The newly discovered XLUUVs in Sanya are said to be much larger than the HSU001s and similar to the Boeing-manufactured Orca XLUUV in size.

The U.S. Navy in 2019 awarded Boeing contracts worth a total of U.S. $43 million to produce four Orca XLUUVs. The 15.5m-long submersible could be used for mine countermeasures, anti-submarine warfare, anti-surface warfare, electronic warfare and strike missions.

Two deep-sea submersibles, Fendouzhe and Shenhai Yongshi, have just conducted the first ever joint operation in the South China Sea, according to Xinhua.

They completed assigned tasks in the South China Sea including underwater real-time positioning, voice communication, target search and recovery, and rapid mobility and collaborative tasks, at a depth of 1,500 meters.

The Fendouzhe set a national record by diving to a depth of 10,909 meters in the Mariana Trench, the world’s deepest natural trench in the western Pacific in Nov., 2020.

Although the submersibles have been mostly involved in civilian research projects, the technology can be employed for military purposes.

China has been promoting military-civil fusion, a national strategy aimed at developing the Chinese military through encouraging investment and technologies from the private sector and academic institutions.