How is Southeast Asia’s Balancing Strategy on Ukraine Faring? – The Diplomat 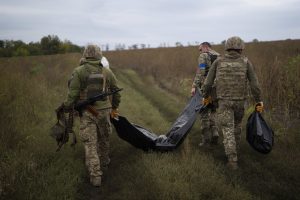 Ukrainian servicemen carry a bag containing the body of a Ukrainian soldier, center, as one of them, right, carries the remains of a body of a Russian soldier in a retaken area near the border with Russia in Kharkiv region, Ukraine, September 17, 2022.

Since Russia began its “special military operation” in Ukraine in February, the relationship between Russia and Southeast Asia has garnered significant attention. This is because, first of all, Russia is Southeast Asia’s leading arms supplier. Second, some members of the Association of Southeast Asian Nations (ASEAN), especially the Philippines a traditional ally of the United States, have deepened their relationships with Russia in recent years. Third, the ties between Southeast Asia and Russia may have substantial impacts on the international sanctions campaign and consequently the course of the war.

Southeast Asia is renowned for its attempts to balance among great powers. However, a systematic examination of how these countries are implementing the strategy between the West and Russia has yet to be conducted. Many have only noted the bloc’s weak condemnation of Russia’s aggression and its reluctance to name it the aggressor. In addition to these joint statements from ASEAN, this article argues that Southeast Asia has so far employed three additional distinct policy tools in order to maintain its neutrality.

First, multilaterally, Southeast Asian countries at first joined the West in condemning Russia, but have since gradually softened their stance towards Moscow. The United Nations General Assembly (UNGA) has proposed and voted on three resolutions concerning Russia. Regarding the first resolution, which condemned Russia’s aggression, and the second one, which addressed the humanitarian consequences of the invasion, the majority of Southeast Asian countries voted in favor, while none voted against. However, only two countries supported the third resolution to suspend Russia’s membership in the U.N. Human Rights Council. Even Singapore, the only Southeast Asian country to impose sanctions on Russia, abstained, along with five other ASEAN member states. Laos and Vietnam voted no. Changes in voting indicate, on the one hand, that Southeast Asian countries are aligned with the West, calling for rule-based world order and respecting each other’s territory and sovereignty. On the other hand, they also highlight the inclusivity of the multilateral system and Southeast Asian nations’ refusal to isolate Russia.

Second, bilaterally, Southeast Asian countries have maintained close diplomatic and economic ties with Russia. Meanwhile, they have avoided direct military interaction with the country. For instance, the Philippines canceled a contract to purchase 16 Russian military helicopters due to actual or anticipated U.S. pressure. Despite this, Manila is still attempting to secure cheaper fertilizer through government-to-government deals with Russia.

Vietnam, one of the largest buyers of Russian arms in the region, has also been reluctant to continue its military ties with Russia since the beginning of the war. It has been ambiguous as to whether a joint military exercise will be held with Russia later this year, and it has reduced its purchases of military equipment from Russia. Although Vietnam is distancing itself militarily from Russia, it is strengthening diplomatic and economic relationships with the country. For instance, Vietnam invited the Russian foreign minister to visit the country in July. It has also worked with Russia to facilitate trade and investment.

Russia reported that Laos was willing to participate in a joint tank division drill with it this year, but no date has been set. What’s more, Laos has not publicly mentioned the proposed drill; this is a clear indication that Laos is attempting to downplay the drill. While avoiding being close to Russia militarily, Laos’ government is reaching out to Russia for its cheap oil.

Third, several Southeast Asian countries are trying to mediate between Ukraine/the West and Russia. In June, Indonesian President Joko Widodo, also known as Jokowi, visited Germany, Ukraine, and Russia. By visiting these countries, Jokowi urged them to open dialogues and stop the war. Besides, Indonesia, as the chair of this year’s G20, has invited the leaders of Russia, the United States, and Ukraine to attend the G20 summit in November and advocated for direct talks between the involved parties. Cambodia, as this year’s ASEAN chair, also called for an end to the war when holding a series of ASEAN meetings with leaders from the U.S. and Russia.

Southeast Asia is not taking sides in the Russia-Ukraine war. Even Singapore, the only ASEAN member state who has imposed sanctions on Russia, has not directly chosen a side. Singapore’s decision to impose sanctions, as opposed to aligning with the West, is to demonstrate its ability to conduct an independent foreign policy and protect its national interest amid international conflicts. Moreover, Southeast Asia has successfully established its neutrality in the Russia-Ukraine war through the above three major ways, as the EU, the U.S. and Russia have all sought to strengthen their relationships with the region since the outbreak of the conflict.

The war has now entered its seventh month, and an end to the fighting is unlikely in the near future. The West is seeking to impose more sanctions on Russia, including visa restrictions and Russian oil price caps. Meanwhile, Russia has taken an increasing number of retaliatory sanctions against the West, especially the U.S. As the battle between the West/Ukraine and Russia continues to escalate, the room for Southeast Asian countries to strike a balance between the two blocks is growing smaller. While the leaders of Southeast Asia are facing mounting pressure, this also presents an opportunity to test the efficacy of their long-established balancing strategies.