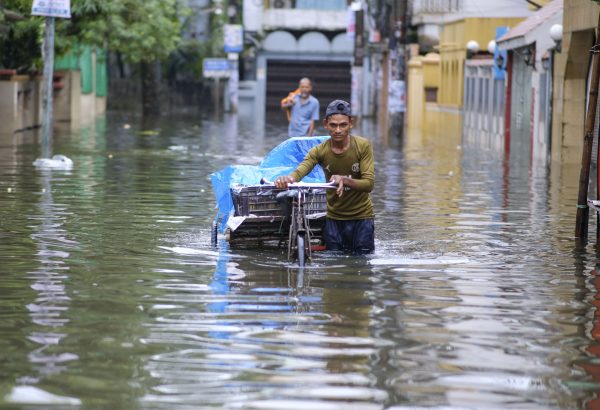 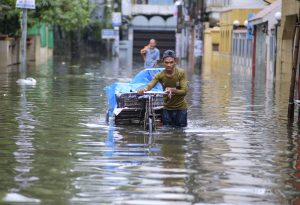 A man pushes his cart through flood waters in Sylhet, Bangladesh, Monday, June 20, 2022.

Authorities in India and Bangladesh struggled Monday to deliver food and drinking water to hundreds of thousands of people evacuated from their homes in days of flooding that have submerged wide swaths of the countries.

The floods triggered by monsoon rains have killed more than a dozen people, marooned millions and flooded millions of houses.

In Sylhet in northeastern Bangladesh along the Surma River, villagers waded through streets flooded up to their knees. One man stood in the doorway of his flooded shop, where the top shelves were crammed with items in an effort to keep them above water. Local TV said millions remained without electricity.

Enamur Rahman, junior minister for disaster and relief, said up to 100,000 people have been evacuated in the worst-hit districts, including Sylhet. About 4 million are marooned, the United News of Bangladesh said.

Flooding also ravaged India’s northeastern Assam state, where two policemen involved in rescue operations were washed away by floodwaters on Sunday, state officials said. They said about 200,000 people were taking shelter in 700 relief camps. Water in all major rivers in the state was above danger levels.

Assam has already been reeling from massive floods after torrential rains over the past few weeks caused the Brahmaputra River to break its banks, leaving millions of homes underwater and severing transport links.

The Brahmaputra flows from Tibet through India and into Bangladesh, with a nearly 800-kilometer (500-mile) journey through Assam.

Major roads in affected regions of Bangladesh were submerged, leaving people stranded. In a country with a history of climate change-induced disasters, many expressed frustration that authorities haven’t done more locally.

“There isn’t much to say about the situation. You can see the water with your own eyes. The water level inside the room has dropped a bit. It used to be up to my waist,” said Muhit Ahmed, owner of a grocery shop in Sylhet.

Bangladesh called in soldiers on Friday to help evacuate people, but Ahmed said he hasn’t seen any yet. “We are in a great disaster. Neither the Sylhet City Corporation nor anyone else came here to inquire about us,” he said. “I am trying to save my belongings as much as I can. We don’t have the ability to do any more now.”

The national Flood Forecasting and Warning Center said on Sunday that flooding in the northeastern districts of Sunamganj and Sylhet could worsen. It said the Teesta, a major river in northern Bangladesh, may rise above danger levels. The situation could also deteriorate in other northern districts, it said.

Officials said floodwaters have started receding in the northeast but are posing a threat to the central region, where water flows south to the Bay of Bengal.

BRAC, a private nonprofit group, opened a center Monday to prepare food as part of plans to feed 5,000 families in one affected district, but the arrangements were inadequate, senior director Arinjoy Dhar said. In a video posted online, Dhar asked for help in providing food for flood-affected people.

Bangladesh is mostly flat and low-lying, so short-term floods during the monsoon season are common and are often beneficial to agriculture. But devastating floods hit the country every few years, damaging its infrastructure and economy. Almost 28% of the nation’s 160 million people live in coastal regions, according to the World Bank.

One of the worst floods took place in 1988, when much of the country was under water. In 1998, another devastating flood inundated almost 75% of the country. In 2004, more prolonged flooding occurred.

Scientists say flooding in Bangladesh has been worsened by climate change. According to the United Nations’ Intergovernmental Panel on Climate Change, about 17% of the population will need to be relocated over the next decade or so if global warming persists at the present rate.