New Mexico’s Largest Wildfire Was a Prescribed Burn. What Are Victims Owed? 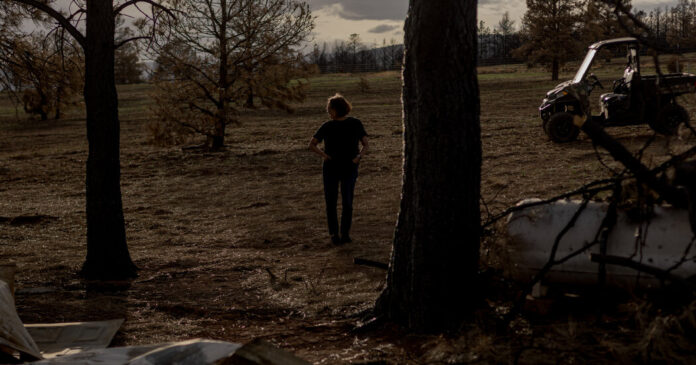 MORA, N.M. — It started small, with a team of federal employees using drip torches to ignite a prescribed burn in the Santa Fe National Forest, aimed at thinning out dense pine woodlands.

But as April winds howled across the mountains of brittle-dry northern New Mexico, driving the fire over its boundaries and soon into the path of another out-of-control prescribed burn, it grew to become one of the U.S. Forest Service’s most destructive mistakes in decades.

The resulting merger of those two burns, called the Calf Canyon/Hermit’s Peak blaze, now ranks as the largest wildfire in New Mexico’s recorded history. Still burning in a zone of more than 341,000 acres — larger than the city of Los Angeles — the fire has destroyed hundreds of homes and displaced thousands in a region where Hispanic villagers settled centuries ago.

The painful losses have created a backlash against the Forest Service and provided a pivotal test case for how the authorities react when a prescribed burn goes badly wrong.

“I hope those responsible for this catastrophic failure are not sleeping at night,” said Meg Sandoval, 65, whose family settled in the region in the 1840s. She is now living out of a pickup camper shell after her home in Tierra Monte was destroyed by the fire.

“They ruined the lives of thousands of people,” she said.

With patience in New Mexico wearing thin, the stakes are immense. Drought and climate change have turned the Western United States into a tinderbox, resulting in more destructive wildfires of all kinds. Drawing on ancient fire management practices, federal and state officials are setting prescribed burns in forests where natural fires have been suppressed for decades, trying to thin out a buildup of vegetation that can fuel disastrous blazes.

But as forest managers lose control of some of the fires they set, public backlash is mounting.

On May 20, after the New Mexico fire exploded, Randy Moore, chief of the U.S. Forest Service, announced a 90-day pause of prescribed fire operations on National Forest lands, giving officials time to study the program and how it has been carried out.

In an internal review of the burn set on April 6, Forest Service investigators found that fire managers had followed a plan within approved limits. But a subsequent analysis of weather and vegetation showed that “the prescribed fire was burning under much drier conditions than they understood.”

The review, which is expected to be made public this week, described a chaotic sequence of events in which nearby automated weather stations were offline, National Weather Service forecasts were used instead of relying on “local expertise” to understand the variable wind conditions, and relative humidity dropped “well below” the forecast range.

The inquiry also found that fire personnel “did not cease ignitions or suppress the prescribed fire after clear indications of high-fire intensity,” and that some were using a radio frequency that made them unreachable on several occasions. District fire employees also perceived pressure to “accomplish the mission,” which may have led to taking greater risks, the review found.

Despite such problems, Mr. Moore defended the mission in an interview, calling prescribed burns crucial for reducing the threat of extreme wildfires. In 99.84 percent of cases, he said, the burns go as planned.

“But that .16 percent that get away, we’re experiencing that now,” Mr. Moore acknowledged. “Anytime there’s a lack of trust, it takes time to rebuild that. Words don’t build that trust. Deeds build that trust.”

In a brief visit to New Mexico this month, President Biden sought to ease some of the concerns. He said the Federal Emergency Management Agency would cover 100 percent of the cost of temporary housing and cleanup in the first 90 days after damage from the wildfire, up from the standard 75 percent. FEMA has distributed about $3.4 million to about 1,000 families, the agency said.

Mr. Biden also expressed support for a bill to create a fund to cover losses from the fire, money considered crucial in a place where much of the destroyed property was uninsured. But he warned that such a measure would probably need help from Republicans in the Senate. The office of the minority leader, Senator Mitch McConnell of Kentucky, did not respond to a request for comment.

Representative Teresa Leger Fernández, a Democrat who represents the fire-plagued region of northern New Mexico in Congress, said she welcomed the administration’s moves to increase federal aid, and to take steps to mitigate potential flooding in national forests, which is critical as the Southwest’s monsoon season starts, bringing the danger of flooding and mudslides to the fire-scarred landscape.

But like many of her constituents, Ms. Leger Fernández said she was furious to learn that the Forest Service had started both blazes. “How could you make the same mistake twice in the same neighborhood?” she asked.

Tanya Kwan Simmons, whose home in the village of Cleveland was destroyed, said insurance was expected to cover a small fraction of her family’s losses, related to mortgage payments and other liabilities. “The bank will get its money, then we’re left with a piece of useless dirt,” said Ms. Kwan Simmons, 53.

Her insurance company said she and her husband must rebuild on the same lot, she said, “which is a joke based on the destruction and real threat of flooding.”

With other New Mexico lawmakers in Congress, Ms. Leger Fernández has proposed legislation to more fully compensate fire victims. But she said her bill was unlikely to advance on its own through both chambers, although it could potentially be included in other legislation.

The uncertainty stands in contrast to the reaction to a fire in 2000 that was set by the National Park Service and destroyed hundreds of homes in Los Alamos, N.M. FEMA quickly dispensed cash to victims in addition to normal emergency relief, and Democrats and Republicans in New Mexico’s congressional delegation swiftly won bipartisan support of a law authorizing extensive compensation for fire victims.

Los Alamos, one of the richest towns in the West, has a large number of residents with doctorates who work on the country’s nuclear arsenal and draw high salaries from the national laboratory there; some of the communities upended by this year’s fire figure among New Mexico’s poorest places.

Antonia Roybal-Mack, an Albuquerque lawyer, was an aide to Pete Domenici, a Republican senator who was known for his bipartisanship, at the time of the Los Alamos fire. She said that today’s polarizing politics could block similar aid from passing the Senate, which is split evenly between Democrats and Republicans.

Ms. Roybal-Mack grew up in the area torched by this year’s wildfire. She said her family could have sold her father’s 360-acre ranch for several million dollars before the prescribed burns got out of control. “Now, it’s worth nothing,” she said.

Eyeing the difficulty that many people in New Mexico may have in getting compensation, Ms. Roybal-Mack is laying the groundwork for a mass tort case against the Forest Service.

Mr. Moore, the Forest Service chief, declined to provide specific information about what his agency, part of the Department of Agriculture, could do to compensate victims. The U.S.D.A., he said, was working as “one department” to see how it might provide assistance.

The 90-day pause on prescribed burns ordered by Mr. Moore, along with the scrutiny such operations are drawing, has some wildfire experts concerned that they will be sidelined — which could end up producing even more colossal blazes in areas with overgrown vegetation.

“We shouldn’t necessarily view one that escaped, even though it was destructive and massive, as a reason to end all prescribed burns,” said Rebecca Miller, a postdoctoral scholar with the University of Southern California’s West on Fire Project.

But even some who support thinning out forests lay the blame for this latest tragedy squarely on long-enduring Forest Service policies.

Patrick Dearen wrote a book about the Pecos River, whose headwaters are threatened by the Calf Canyon/Hermit’s Peak fire. He noted that in the 1890s, the forest around the river that is now designated as national forest was made up mostly of “old burns,” as well as meadows, open parks and barren peaks.

An inventory in 1911 showed that a typical acre of ponderosa pine habitat had 50 to 60 trees. By the end of the 20th century, Mr. Dearen said, after a long national policy of suppressing natural fires, that had skyrocketed to 1,089 trees per acre.

“Nature had done its job well, but no one recognized it,” Mr. Dearen said. Still, if the government is going to assume nature’s role of thinning out forests, it needs to own up to its mistakes, he said.

“If an individual goes out and starts a fire on purpose and it gets away, he’s probably going to go to jail,” he said. “The federal government needs to assume responsibility to the people.”