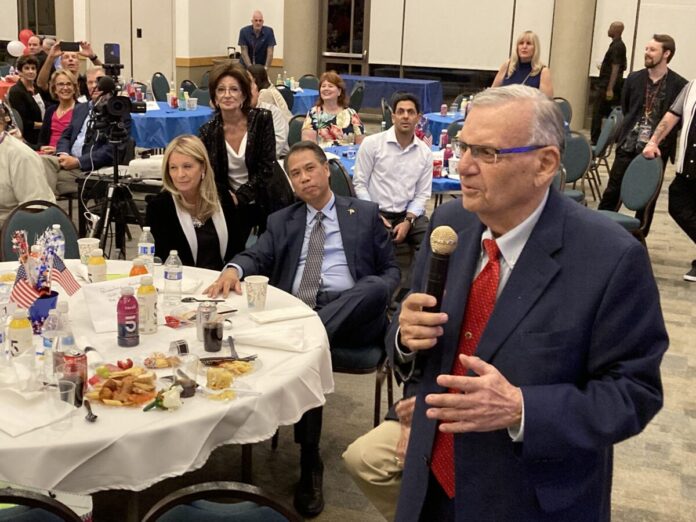 Arpaio marked the milestone event at Fountain Hills Community Center on June 18 with more than 250 guests in attendance.

“God bless your dedication to this American dream,” Nugent said.

In a personal letter to Arpaio, Donald and Melania Trump paid tribute to the former Maricopa County sheriff and his law enforcement career spanning nearly 50 years. During that time, Arpaio earned the nickname “America’s Toughest Sheriff” for his hardline stance on crime and illegal immigration.

Though criticized by liberals for his tent city program and making criminals wear pink boxer shorts as part of their rehabilitation, Arpaio’s no-nonsense approach to crime and illegal immigration drew him widespread support.

He served as Maricopa County sheriff from 1993 until his electoral defeat in 2016.

As a 23-year resident of Fountain Hills, Arpaio, at age 90, hopes to unseat Ginny Dickey in the 2022 mayoral election.

“I always go to the people. I don’t ask for endorsements. I’m doing everything you can when you run for office,” Arpaio told The Epoch Times.

“Of course, I don’t take anything for granted. I learned that. I also learned that [some] people don’t have any loyalty—and I’m not talking about Democrats.”

Arpaio acknowledged that if elected, he would likely become America’s oldest mayor and politician—older than the 10 most senior members of Congress, including U.S. Sen. Dianne Feinstein (D) at 89.

“Ninety is just a number,” Arpaio said, believing he has the good health and stamina to serve as mayor for the next two years.

“I’m on my legs all hours of the day. My first course of action [if elected] is I run down to the county [offices] and sign up again for the next time,” he said.

“My reputation is cracking down on crime. But I’m going to continue my policy.”

Arpaio quipped he has a “trick up my sleeve,” which is to create a “posse” of auxiliary volunteers if he’s elected mayor.

“To get the job, you need additional manpower,” he said.

Arizona state Sen. Wendy Rogers (R) described Arpaio as “a wonderful influence on my life” and one of the only fellow statesmen and politicians who is “loyal as the day is long.”

“Everything he says, you can take it to the bank,” Rogers told The Epoch Times. “And when he thought about running for mayor of Fountain Hills, he called and said, ‘Hey, colonel. What do you think of that idea?’

“I said, ‘That’s a noble idea. It’s perfect because we at the state level struggle with rogue mayors. We need someone like [Arpaio] who is always ahead of his time, who has always held to what’s right. And we need mayors who are icons in upholding the rule of law.”

“Well, okay, then I’ll do it,” Arpaio responded.

Victory, however, will carry a certain amount of political freight.

Arpaio says he’ll just roll with the slings and arrows from the political left, as he’d done in the past, though he admits to being a “glutton for punishment” running for mayor as America’s perhaps most controversial sheriff.

He recalled his late wife Ava saying, “If you’re ever going to run, why not run for mayor? You don’t have to travel.”

“I said, ‘That’s not a bad idea.’ I’ve got life experience—common sense.

“I paid my dues. I love this town,” Arpaio said.