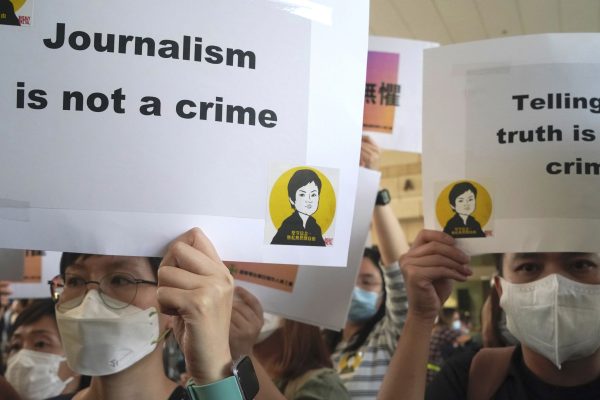 On June 10, FactWire announced that it was shutting down with immediate effect, becoming the tenth Hong Kong news organization to close in less than 12 months. FactWire had used an innovative crowdfunding model to produce Chinese-language investigative journalism, exemplifying the type of award-winning independent media that once flourished in the territory. But just as many feared when Beijing imposed the National Security Law (NSL) on June 30, 2020, the landscape for free expression in Hong Kong is now increasingly desolate.

Under the NSL, Hong Kong’s total score in Freedom in the World, Freedom House’s annual report on political rights and civil liberties, has dropped by 12 points, from 55 to 43, on a scale of 0 to 100. The score declined by nine points in 2021 alone, marking the year’s the third-worst decline globally after Myanmar and Afghanistan, which experienced a military coup and conquest by the Taliban, respectively. This is especially significant given that most of the countries and territories with deteriorating freedoms only see their scores decline a point or two in any given year.

The security law has served as a crucial tool in Beijing’s devastating authoritarian takeover of Hong Kong, enabling the Chinese Communist Party (CCP) to bring a free and vibrant society to heel.

The following are among the five most significant changes to freedom of expression under the NSL:

Since the introduction of the NSL, the authorities have crushed major pro-democracy media outlets like Apple Daily and Stand News, which closed after police raided their offices and arrested staff on national security charges. Police visited another outlet in May and told the founder to delete articles that supposedly endangered national security. In the past 12 months, seven additional Chinese-language media organizations closed, and two have limited their operations, though some smaller outlets or individual journalists continue to publish on social media.

All told, approximately 20 percent of Hong Kong’s Chinese-language media workers have lost their jobs in the national security crackdown. English-language outlets like Hong Kong Free Press and the South China Morning Post, which is owned by the mainland company Alibaba, still produce independent content but may be a target for future enforcement efforts.

2. Journalists Added to a Growing List of Political Prisoners

At least 12 journalists and media professionals have been charged with NSL or sedition crimes for their work, including Apple Daily owner Jimmy Lai and senior staff at Stand News. Lai’s trial is expected to take place this summer.

The NSL charge of “collusion with foreign forces,” which has been applied to journalists who published opinion pieces calling for international sanctions against those undermining basic rights and political autonomy in Hong Kong, carries a maximum penalty of life imprisonment. Charges of sedition, under a colonial-era law enacted in 1938, draw lighter sentences and have been filed against some press workers, probably to enable punishment of actions that took place before the NSL was in force. One media professional was convicted and sentenced in April to 40 months in prison for sedition and other charges unrelated to his media work.

These cases have led the Committee to Protect Journalists to include Hong Kong journalists on its annual global census of imprisoned reporters for the first time. They have also contributed to the growing number of prisoners of conscience in the territory: At least 183 people have been arrested for national security-related crimes since June 2020, and there are over 1,000 political prisoners in total, including those convicted for protest-related activities. Faced with such repression, many Hong Kongers have fled into exile. Some journalists and activists have created diaspora media outlets like Flow HK, Commons, and The Chaser to cover Hong Kong news and serve the burgeoning exile community.

As independent media are targeted by police crackdowns, the government has worked to convert the once-respected public broadcaster Radio Television Hong Kong (RTHK) into a government mouthpiece. RTHK no longer has editorial independence, and its staff can be held financially liable for producing programs that are later censored. RTHK deleted much of its pre-NSL content from the internet, depriving millions of residents of access to historic archives. In August 2021, the station partnered with Beijing’s China Media Group to broadcast programming that would “nurture a stronger sense of patriotism.”

Two newspapers directly owned by the Chinese state – Ta Kung Pao and Wen Wei Po – increasingly play a role similar to that of state media on the mainland, issuing denunciations that may signal future police crackdowns. In September 2020, a senior Hong Kong official praised Ta Kung Pao as a “golden microphone for the central government.” On June 13, the CCP mouthpiece People’s Daily carried on its front page a letter from Chinese President Xi Jinping in which he congratulated Ta Kung Pao on its 120th anniversary and for “contributing to maintaining Hong Kong’s stability.”

Hong Kongers enjoyed a relatively free and open internet before the introduction of the NSL, but internet censorship has become increasingly common. To date, eight websites have been blocked inside Hong Kong. While this is still a far cry from conditions on the mainland, where the Great Firewall blocks thousands of websites, it represents a significant change.

In May, pro-government lawmakers called on the Hong Kong government to consider blocking access to the messaging platform Telegram under revised October 2021 legislation related to doxing – the unauthorized release of personal information online. While Telegram is still accessible in Hong Kong, the company recently shut down three channels for alleged doxing in response to requests from the Office of the Privacy Commissioner for Personal Data. The law allows the commissioner to arrest users, order online content taken down, block websites, and arrest local employees of overseas technology companies if their companies fail to comply with takedown requests, drawing a potential two-year prison sentence. So far, authorities have used the law to arrest at least six people and remove thousands of posts across 14 platforms.

Even watching a documentary about pro-democracy protests on streaming platforms may constitute a NSL offense, and authorities are expanding their ability to monitor online activity. On March 1, a law requiring residents to register their SIM cards under their real names came into effect, replicating a system used on the mainland to surveil and arrest internet users. Within a month, 1.4 million cards were linked to real names.

In another shift toward mainland conditions, authorities have sought to erase Hong Kongers’ collective memory of the 1989 massacre of protesters in and around Tiananmen Square, whose anniversary is marked on June 4. The long-standing annual vigil in Victoria Park has been banned since the NSL came into effect, and the area is now heavily policed, with six people arrested on the sensitive date this year. Police also arrested four people for spray-painting the numbers “six” (for June) and “four” around the city. In January, an activist was sentenced to 15 months in prison for writing a Facebook post calling on residents to light a candle for the June 4 anniversary in 2021. Beijing has sent letters to the consulates of foreign democracies in Hong Kong to complain about their online memorials on the anniversary. Officials have also removed memorial statues at universities and restricted RTHK from reporting on the topic. Despite the closing space, some Hong Kongers marked the recent anniversary with small gestures of protest.

On July 1, former police officer and security official John Lee will become the fifth chief executive of Hong Kong. The selection of Lee, through a process imposed by Beijing, indicates that the national security crackdown is not over. With the government already banning media outlets from covering his inauguration and the 25-year handover ceremony, it is clear Lee will continue to restrict press freedom. In fact, the government has announced several pieces of draft legislation that would lead to further restrictions on media freedom and freedom of expression.

For example, since May 2021 the government has been working on “fake news” legislation that could yield more criminal charges against journalists, closures of outlets, and self-censorship. In January 2022, the security secretary announced the government’s intention to enact Article 23 of the Basic Law, a long-dormant provision that calls for legislation prohibiting treason, secession, sedition, subversion, theft of state secrets, and activities by foreign political organizations. “State secrets” charges are regularly used against journalists on the mainland, while academic, artistic, and religious expression have already been targeted under the NSL and could face even more severe restrictions under Article 23. On May 25, the government also announced that it was working on a Cybersecurity Law to deal with national security threats online.

The Legislative Council has been devoid of pro-democracy opposition members since a mass resignation in 2020 and the imposition of a repressive new electoral system in 2021, meaning any government-backed legislation will likely pass with little scrutiny.

Next month, the U.N. Human Rights Committee will review Hong Kong’s compliance with its legal obligations under the International Covenant on Civil and Political Rights. Freedom House submitted a report to the committee about the severe violations of press freedom and internet freedom in recent years. It is vital for the committee’s experts to publicly and clearly describe how the Chinese and Hong Kong governments have utterly failed to comply with the treaty. In addition to supporting such international accountability mechanisms, democratic governments should provide assistance to those fleeing the territory. The reality is that Hong Kong democracy advocates have few options left besides jail or exile, and the trend since 2020 suggests that human rights conditions will continue to deteriorate.