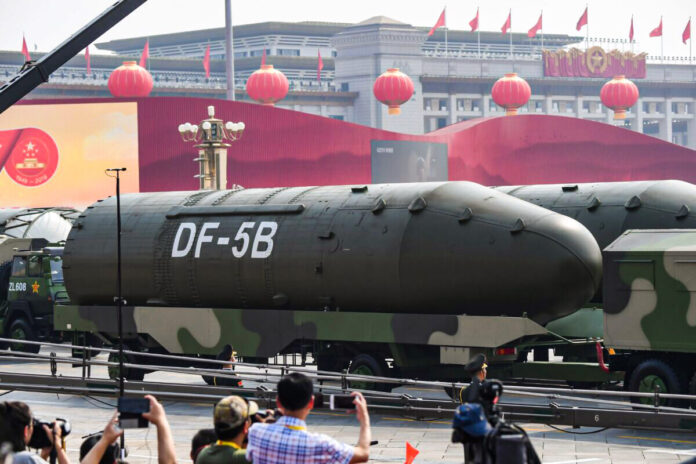 China successfully intercepted a ballistic missile in mid-flight, according to a statement released by the Chinese military June 19.

“China conducted a land-based mid-stage anti-missile interception technology test in its territory, and the test achieved its intended purpose,” said the announcement, which appeared in Chinese state-run media on June 20.

“The test was defensive and did not target any country,” the statement also said.

The Chinese Communist Party (CCP) has massively expanded and modernized its military capabilities under Xi Jinping, who became General Secretary of the Party in 2012. The effort has included nuclear expansion, hypersonic orbital bombardment systems, and anti-satellite weapons, among other things.

Notably, the weekend test likely means that the CCP is closer to having its own version of a defensive anti-missile system such as that deployed by the United States in South Korea, which CCP leadership has repeatedly condemned throughout the years.

The CCP has historically maintained secrecy about its missile defense systems, neither confirming nor denying their exact capabilities, but state-owned media previously claimed that the regime has conducted anti-missile tests since at least 2010.

The episode follows a flurry of bellicose rhetoric from the CCP regarding its ambitions to forcibly unify self-ruled Taiwan with the mainland, as well as efforts to drive a wedge between the United States and its regional partners in the Indo-Pacific.

During a tense meeting with U.S. Defense Secretary Lloyd Austin, Chinese Defense Minister Wei Fenghe said that the CCP was willing to start a war to ensure that Taiwan was not recognized as a nation by the international community.

“If anyone dares to split Taiwan from China, the Chinese army will definitely not hesitate to start a war no matter the cost,” Fenghe said.

The CCP says that Taiwan is a breakaway province. CCP leader Xi Jinping has vowed to unite the two entities, and has not ruled out the use of force to do so. Taiwan has been self-governed since 1949, however, and has never been under the control of the CCP, but is a flourishing democracy.

The United States has acknowledged the CCP’s regime to be the only entity representing China since 1979, and does not currently recognize Taiwan as an independent nation. The United States does maintain a commitment to Taipei outlined in the Taiwan Relations Act of 1979, however, in which it guarantees Taiwan will receive the military capabilities required to sustain its own defense.

Days after the dust up, a top politician in Taiwan said that Taiwan’s domestically mass-produced missiles were capable of striking Beijing and the Three Gorges Dam, the largest power station in the world, in an apparent nod to CCP leadership that the island was willing to mount a sustained defense of its de facto independence.

It is currently unclear what, if any, new capability the test might add to the Chinese arsenal.