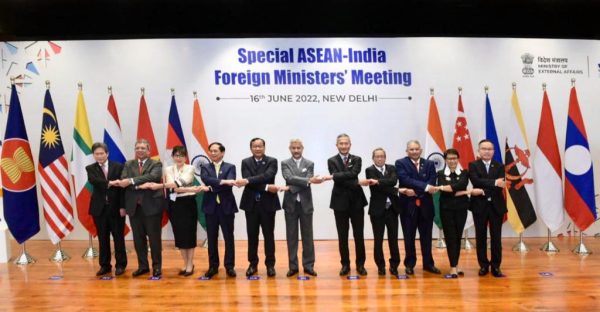 When India hosted a special gathering of foreign ministers from the Association of Southeast Asian Nations (ASEAN) last week, the specter of war wasn’t far from the minds of the assembled ministers. The war in Ukraine has raised fuel and food costs across Asia and driven countries into unprecedented economic distress. But the war has also lit fears of other wars closer home.

The source for much of that fear stems from a deepening partnership between China and Russia. In early February, even as the Ukraine invasion loomed large, China’s President Xi Jinping and Russia’s President Vladimir Putin unveiled a friendship with “no limits” and a 5,000-word manifesto for an alternative world order. That friendship has since grown by leaps and bounds.

When Putin eventually invaded Ukraine, some analysts believed that Xi was miffed at being blindsided. Some of us even argued that the economic costs of the war would push Beijing to rein Putin in.

But instead, Xi has in fact doubled down on his support for Russia. Late last month, the two countries conducted their first joint military drill since the invasion. This month, they opened a new cross-border bridge in the Russian Far East, hoping to boost bilateral trade.

The reverberations of this relationship are now being felt more directly in Asia, as tensions rise over Taiwan. Last week, Chinese state media reported that Xi and Putin had a phone call during which the Russian president “opposed any force using questions relevant to Xinjiang, Hong Kong, and Taiwan to interfere in China’s internal affairs.” That rhetoric was taken several notches higher by China’s Defense Minister Wei Fenghe, who launched a scathing attack on the U.S. and declared that Beijing “will fight at all cost” and “to the very end” to capture Taiwan.

Meanwhile, over the past few weeks, Canada and Australia have accused Chinese fighter jets of flying perilously close to their own borders over the Asian seas.

For countries that are heavily dependent on trade and regional stability – as the nations are ASEAN are – such developments are understandably concerning. So, it was no surprise that most ASEAN foreign ministers in New Delhi last week were eager to find ways to steer clear of the crossfire.

“The sharpening superpower rivalry between the U.S. and China has direct implications for all of us,” Singapore’s foreign minister, Vivian Balakrishnan, told the gathering. “These developments, if unchecked, can threaten the sole system of peace and stability which we have depended on for the basis of our growth and development and prosperity over many decades.”

Economically, ASEAN is in a tight spot. Owing to trade links built over the last few decades, each of them is heavily dependent on China. But owing to several territorial disputes in the South China Sea, most of them also see Beijing as a serious threat.

That’s where India is supposed to come in. As the other major economy in the region, the ASEAN hopes that India will help maintain the regional balance of power and slowly wean the group off its trade dependence on China. On its part, New Delhi also sees Beijing as a threat and would like to steer clear of the superpower rivalry between China and the West.

Yet, so far, the ASEAN has been left disappointed. Militarily, India is still heavily stretched and preoccupied by the Chinese threat. According to some estimates, the Indian army is short by some 100,000 soldiers, as it remains engaged in the Himalayas. The Indian navy is well short of its target of 200 ships, currently possessing only 130. Meanwhile, China has rapidly expanded its presence across the Indo-Pacific, establishing a base in Djibouti, militarizing islands in the South China Sea, signing deals in the Pacific, and potentially building another base in Cambodia.

India’s more logical role would be to rapidly expand trade ties. But here, ASEAN has been left even more disappointed. After it controversial decision to stay out of the Regional Comprehensive Economic Partnership (RCEP) trade bloc, New Delhi was also reported to have played a role more recently in watering down Biden’s new Indo-Pacific Economic Framework (IPEF). Before and during the pandemic, Modi has pursued a protectionist “self-reliance” policy, and in the aftermath of climate-related losses, India recently erected barriers to its agricultural trade.

All told, while India’s trade with the ASEAN amounts to around $78 billion a year, China’s trade is worth over $500 billion – almost a fifth of the bloc’s total trade.

There have also been severe political tensions more recently, after Indonesia and Malaysia protested against controversial Islamophobic comments made by leaders of India’s ruling Hindu nationalist Bharatiya Janata Party. At the India-ASEAN meeting last week, Balakrishnan reflected on the need to “strongly reject hate speech.” He was joined by Indonesia’s foreign minister, Retno Marsudi, who “underlined the importance of tolerance in today’s multicultural society.”

Yet, despite these shortcomings, for ASEAN, India is a partner of necessity, given China’s rising military presence in the region and tensions with the United States. The question the ASEAN will ask itself is whether New Delhi can play the economic and security role that it needs.