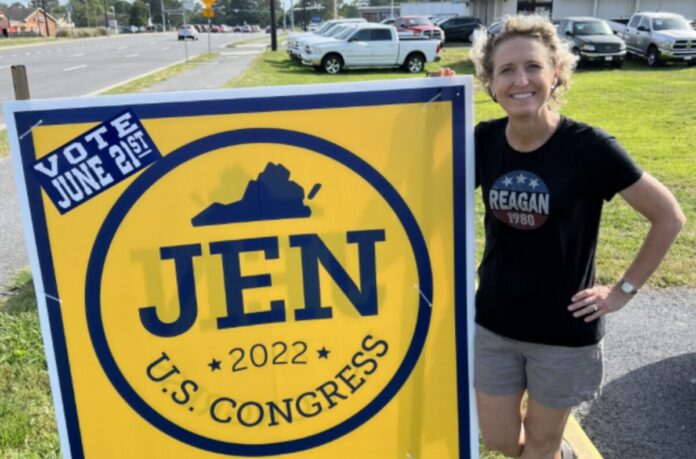 Many of the 82,000 active-duty sailors stationed on the sprawling base’s 15 installations live within CD 2, which also includes one of the nation’s most dense populations of military retirees—especially U.S. Navy veterans.

And if there’s one thing sailors know, whether they served in the surface fleet, in naval air, or in submarine squadrons, it’s that chief petty officers, the highest of the enlisted ranks, are the ones in the sea service who put the “snap to” into getting things done right, right now.

“Chiefs run the Navy. We need chiefs to run Congress,” said Jarome Bell, who retired as a chief petty officer after 27 years in the Navy and is one of four candidates—all veterans—seeking the party nod in CD 2’s June 21 Republican primary.

The winner will square off in November’s general election against U.S. Rep. Elaine Luria (D-Norfolk), who was narrowly elected in 2018 and reelected in 2020 in the purple district.

Luria will not face a primary challenge. Her campaign’s June 1 Federal Election Committee (FEC) filing reported it had $3.38 million in cash on hand, ready to spend on retaining her seat.

Along with the commonwealth’s CD 7, it is one of two Virginia congressional districts among 22 nationwide occupied by incumbent Democrats that the CPVI rates as “tossup” contests in fall’s 2022 midterm elections.

In terms of fundraising, campaign spending, and media exposure, Kiggans is the clear frontrunner. In its June 1 FEC filing, her campaign reported that it had raised $1.334 million, spent $844,634, and had $489,000 on hand.

“We feel great about Tuesday,” Kiggans said on June 17, and even better about taking on Luria in the fall after dispatching her primary rivals on June 21.

“The Democrats know when I am elected Tuesday, they will have lost a seat in November,” she said.

During her 14 months of campaigning, CD 2 voters of all political persuasions told Kiggans that one pressing issue is on their minds.

Elected to the state Senate in 2019, Kiggans was in the capitol on June 17 to vote on 38 budget amendments proposed by Republican Gov. Glenn Youngkin for the commonwealth’s $61 billion general fund two-year spending plan that goes into effect July 1.

During a break in deliberations, she said her three years in Richmond have been “a great learning lesson” that will help her get things done up the road in Washington, D.C.

Kiggans’ aim is to make the November election against Luria “a referendum on Joe Biden’s and Nancy Pelosi’s disastrous policies.”

Altman, too, says he is campaigning on that message.

“The working class is suffering,” he said. “Gas is more than $5 a gallon. People are having to decide whether they’re going to buy food or gas to go to work.”

That may be less than one-fifth of what Kiggans has garnered in financial support, but Altman said that CD 2 voters can’t be bought.

“I guess who the favorite is depends on who you ask,” he said, claiming the state senator is not the frontrunner “if you go off signs in the neighborhoods. We are destroying everybody in the sign game. We have the better ground game at this point.”

Driving home from a June 17 campaign event, Altman said he’s running because “it’s not about a party to me. It’s about the people of the second congressional district, who look forward to being represented by one of their own. I am the only (candidate who) was born and raised here.”

Baan’s campaign reported in its June 1 FEC filing that it had raised less than $30,100 and had about $9,800 each on hand. He was unavailable for comment on June 17.

Baan’s campaign website supports cutting taxes, government spending, and regulations that “make it so hard for small businesses to succeed.”

Running on similar agendas, Bell maintains he is the only true supporter of former President Donald Trump among the four candidates, noting that he ran in CD 2’s 2020 GOP primary as “an America First candidate before it was a cliche.”

Bell, who has a degree in aeronautics from Embry-Riddle Aeronautical University, said that when elected, he will demand an audit of the 2020 presidential election and seek the “executions” of all involved in any fraud uncovered on his now-suspended Twitter account.

He described himself as an “outsider” who sees “people are getting engaged. They are tired of the RINOs backstabbing them and voting with Democrats.”

Kiggans, he said, is “a moderate leftist. I am an America First staunch conservative. She is a globalist establishment RINO, a professional politician.”

“I beg to differ,” Kiggans said, noting that as a Navy H-46 and H-3 helicopter pilot for ten years, she was deployed repeatedly to the Persian Gulf and used her GI Bill benefits to graduate from Old Dominion University’s Nursing School and Vanderbilt University’s Nurse Practitioner program. She married to a former Navy F-18 pilot, has raised four children, and works as a geriatric primary care nurse practitioner.

“I got out of the Navy and raised my children and became a geriatric nurse,” she said, recalling how she “hated politics” but decided to run for office in 2019 “because I was frustrated with the division. So, I got off my couch and got to work.”

Kiggans said she saw Democrat women being elected and wondered, “Where were the conservative women veterans?”

The 2019 Virginia elections “was the year of the blue wave.” But she got elected anyway, “a great victory in a competitive seat,” which is something she thinks she can do again in purple CD 2 in defeating an incumbent Democrat.

Bell, Kiggans said, has no chance to win a general election in CD 2, and Democrats know that. That is why, she said, “The Democrats have spent upwards of $600,000” in the last year “propping up my primary opponent.”

She said Bell’s campaign had received more than $100,000 from Democrat sources, including direct mail circulars “with no disclaimers,” which are illegal.

The Patriot Majority PAC, described as a Democratic/Liberal campaign-funder, has been airing positive ads about Bell over the campaign’s final days, as widely reported in regional media.

“Democrats are playing in Republican primaries. It is shocking how much money they are spending to defeat me. The deception and trickery won’t go far,” Kiggans said, adding, “I guess that’s a compliment.”

Bell would only acknowledge it has been “a very competitive race. I believe it will come down to the wire.”

He’ll spend the campaign’s last few days at “meet and greet events in areas we haven’t had an opportunity to reach into,” adding, “People already know who they are going to vote for.”

Kiggans and Altman said they aren’t so sure about that, so they’ll be aggressively meeting-and-greeting and door-knocking until Election Day.

Altman will close out his campaign with a 7–8 p.m. June 20 “prayer event” at Chesapeake City Park in Chesapeake. He won’t be ask people to pray for his victory the next day, but “to pray for all the people of the second congressional district.”

“I feel good about Tuesday,” he said, “but there are so many variables.”