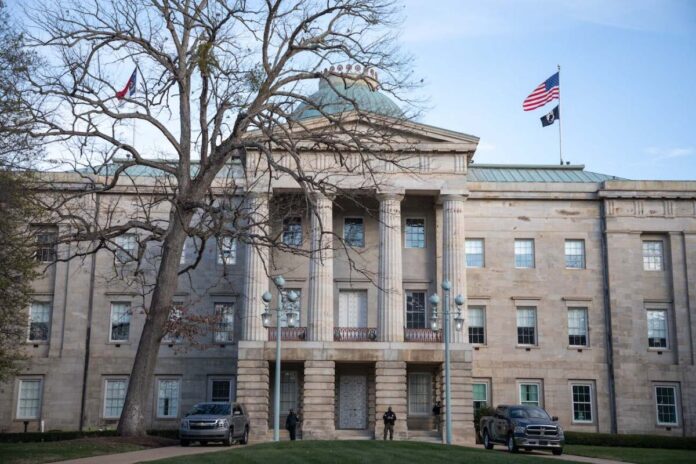 The Supreme Court seems likely to accept a new election law case that Republicans hope will recognize what they say is the preeminent constitutional authority of state legislatures to set the rules for redistricting, congressional and presidential elections, as well as curb the power of state courts to intervene in such disputes.

“The U.S. Constitution is crystal clear: state legislatures are responsible for drawing congressional maps, not state court judges, and certainly not with the aid of partisan political operatives,” Tim Moore, a Republican who is the Speaker of the North Carolina House of Representatives, said in March when he launched an appeal of his state supreme court’s order redrawing the state’s electoral map against the wishes of the state’s GOP-majority legislature.

“We are hopeful that the Supreme Court will reaffirm this basic principle and will throw out the illegal map imposed on the people of North Carolina by its highest court. It is time to settle the Elections Clause question once and for all.”

The case is Moore v. Harper, court file 21-1271; a petition filed on March 17 that was preceded by an emergency application seeking to stay a Feb. 14 ruling by the Supreme Court of North Carolina that required the state to modify its existing congressional election districts for the 2022 primary and general elections. Respondent Rebecca Harper is one member of a group of 25 individual North Carolina voters.

On March 7, the Supreme Court turned away (pdf) the stay application. In an opinion concurring in the denial of the stay, Justice Brett Kavanaugh stated that the high court “has repeatedly ruled that federal courts ordinarily should not alter state election laws in the period close to an election.”

The petition (pdf) was scheduled to be considered by the justices on June 16. The court is next scheduled to announce decisions on pending petitions on June 21. For a petition to be granted, at least four of the nine justices must agree.

Republicans say the U.S. Constitution directly empowers state legislatures to make rules for the conduct of elections, including presidential elections, and yet the Supreme Court has reportedly never invoked the so-called Independent State Legislature Doctrine. The doctrine, a favorite of conservative legal thinkers such as radio host Mark Levin who speaks of it frequently, was often advocated by Republicans throughout the 2020 election that they claim was stolen from the incumbent president, Donald Trump.

The Elections Clause in Article 1 states: “The Times, Places and Manner of holding Elections for Senators and Representatives, shall be prescribed in each State by the Legislature thereof[.]”

The Presidential Electors Clause in Article 2 states: “Each State shall appoint, in such Manner as the Legislature thereof may direct, a Number of Electors, equal to the whole Number of Senators and Representatives to which the State may be entitled in the Congress[.]”

Four conservative Supreme Court justices have gone on record expressing an interest in rule on the doctrine and three justices said it applied in the Bush v. Gore case that resolved the disputed 2000 presidential election.

Although Kavanaugh turned down the stay application, he noted that the issue “is almost certain to keep arising until the Court definitively resolves it.” In an opinion dissenting from the same order, Justice Samuel Alito wrote that if the Elections Clause said the rules were to be prescribed “by each State,” that wording “would have left it up to each State to decide which branch, component, or officer of the state government should exercise that power, as States are generally free to allocate state power as they choose.”

“But that is not what the Elections Clause says. Its language specifies a particular organ of a state government, and we must take that language seriously,” Alito wrote in a dissent that was joined by Justices Clarence Thomas and Neil Gorsuch.

Left-wing election lawyers are dismayed that the Supreme Court could rule on the doctrine.

“A ruling endorsing a strong or muscular reading of the independent state legislature theory would potentially give state legislatures even more power to curtail voting rights and provide a pathway for litigation to subvert the election outcomes expressing the will of the people,” University of California, Irvine law professor Rick Hasen, told The Associated Press.

Meanwhile, legal observers are awaiting a Supreme Court opinion as the justices deliberate another case from the Tar Heel State called Berger v. North Carolina State Conference of the NAACP, court file 21-248. Phil Berger, a Republican, is president pro tempore of the North Carolina Senate. The NAACP is the National Association for the Advancement of Colored People.

The court heard oral arguments in the case on March 21, as The Epoch Times reported.

Berger argued the state’s GOP-majority legislature should be allowed to step in to advocate for a voter ID law in court because Josh Stein, the state’s Democratic attorney general, was allegedly not doing enough to defend the statute.

It is unclear when the opinion will be issued. The justices are trying to clear a backlog of 18 opinions from the current term—including other cases dealing with abortion, school prayer, gun rights, and climate change—before they break for summer recess.

The court is scheduled to release more opinions June 21 and 23.