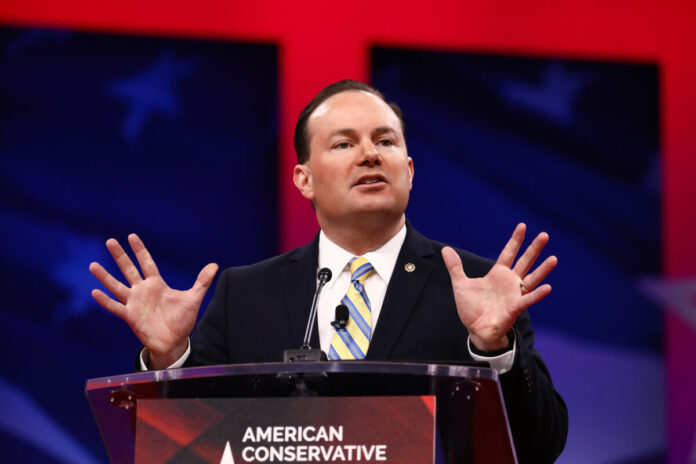 Incumbent U.S. Sen. Mike Lee (R-Utah) will face two Republican opponents in Utah’s June 28 primary in what could turn out to be his most challenging re-election bid in nearly a decade.

In 2010, Lee sailed into office on a Tea Party wave to defeat three-term Sen. Bob Bennett in the Republican primary.

He was reelected in 2016, trouncing Democrat rival Misty Snow with nearly 68 percent of the vote.

However, Utah freshman Sen. Mitt Romney, who launched an unsuccessful presidential run in 2016, has yet to endorse either candidate, saying he is friends with all three, according to news sources.

There are no Democratic candidates in Utah’s 2022 midterm Senate race.

Instead, Utah’s Democratic Party supports former undercover CIA officer Evan McMullin, an Independent, given him potential to unseat Lee through an independent coalition of voters.

McMullin captured 22 percent of the Utah vote when he ran for president against Donald Trump in 2016. Some political observers, however, view McMullin’s anti-Trump stance as helping Democrats.

McMullin launched his campaign in October on a platform of 12 principles, including reaffirming the country’s founding ideals, defending the constitution, and honest government.

“These 12 principles have inspired my campaign to replace Mike Lee and represent Utah in the U.S. Senate. They are essential for helping America move beyond the division and extremism that we see today,” McMullin said on his campaign website.

Edwards, a conservative Republican, hopes to unseat Lee in the primary by bringing her four terms as a Utah representative to the table.

“Being a public servant means working tirelessly for our state alongside constituents and fellow leaders to solve problems,” Edwards said on her website. “That is exactly what I’ve done for my entire career.”

A former marriage and family therapist, Edwards’ list of accomplishments include the passage of the first climate change resolution in Utah.

She also helped create the Commission on Housing and Affordability to address Utah’s housing needs and is viewed as a pioneer of a statewide telehealth program.

By contrast, conservative businesswoman Ally Isom has set her sights on the Republican nomination seeking change on a conservative platform.

“Over the last year, wearing my red running shoes, I walked with everyday Utahns in more than 120 Utah cities and towns across this beautiful state,” Isom said on her website.

“I’ve listened to local community leaders, parents, business owners, entrepreneurs, ranchers, teachers, and everyone in between—all [to] understand what’s top of mind and in the hearts of my fellow Utahns,” Isom added.

Democrats also hope to capitalize on Lee’s perceived political vulnerability based on his text messages uncovered during the Jan. 6 committee investigation. They reportedly show he had a much deeper involvement in attempts to overturn 2020 election results.

On his campaign website, Lee describes himself as a “champion for conservative principles,” getting things done in Congress, and someone who believes in holding power accountable.

Last year, Lee’s bipartisan State Antitrust Enforcement Venue Act of 2021 unanimously passed the Senate. The bill ensures that each state gets the same treatment when choosing the location to enforce federal antitrust laws.

The primary election will take place by mail-in ballot in four congressional districts created by Utah’s legislature in 2021. However, there will be limited opportunities to vote in person.

In Utah County, Election Divisions spokesman Justin Anderson said the county will have six vote centers open on election day for in-person voting, “but a majority of the votes cast will be through [a] vote by mail.”

“We have not experienced any challenges with the new district boundaries following redistricting,” Anderson told The Epoch Times.