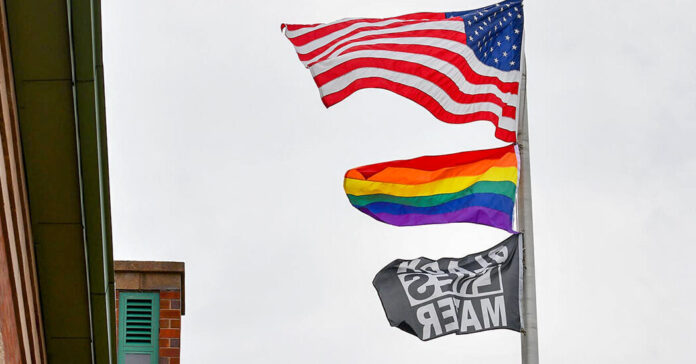 The students at a predominantly Black Catholic middle school in Worcester, Mass., had resoundingly expressed their wishes in January 2021: They wanted Black Lives Matter and Pride flags flown over their place of learning to signal inclusivity.

More than a year later, however, Bishop Robert J. McManus of the Diocese of Worcester told officials at the Nativity School to remove the flags, which are meant to support justice and equality for Black and L.G.B.T.Q. people, saying that the school would be “prohibited from identifying itself as a Catholic school” if it did not comply.

The school refused. This week, Bishop McManus said in a letter that he had “no other option” but to declare the school as no longer Catholic.

“It is my sacred duty and inherent responsibility to determine when a school claiming to be ‘Catholic’ is acting in such a way that is contrary to the teachings of the Catholic Church and disregards my legitimate authority,” Bishop McManus wrote in a decree published on Thursday.

He added that the school “may no longer use the title ‘Catholic’ to describe itself.”

Thomas McKenney, the president of the Nativity School of Worcester, said in an open letter that the school would appeal the decision and continue to display the flags “to give visible witness to the school’s solidarity with our students, families and their communities.”

As of Saturday, the school still listed its religious affiliation as Roman Catholic on its website.

Mr. McKenney and Bishop McManus did not immediately respond to calls seeking comment on Saturday.

The clash at the school — which is Jesuit-run, tuition-free and serves boys experiencing economic insecurity — comes as the Catholic church’s stance on L.G.B.T.Q. rights continues to confuse and frustrate L.G.B.T.Q. people, who have heard mixed messages from the Vatican.

Pope Francis, who famously responded “Who am I to judge?” concerning gay priests in the church, has become increasingly difficult to discern where he stands on the issue: When the Congregation for the Doctrine of the Faith was asked last year if Catholic clergy had the authority to bless gay unions, the answer, which Francis approved, was: “Negative.”

In his decree, Bishop McManus states that while the church “stands unequivocally behind the phrase” Black Lives Matter, he believes the movement has used the phrase to contradict the Catholic teaching on “the importance and role of the nuclear family.” And he opposed the Pride flag because it “represents support of gay marriage” and an L.G.B.T.Q. “lifestyle.” Those messages, he states, go against “Catholic social and moral teaching.”

But some parents and faculty members have questioned why his order came so close to Juneteenth, a holiday to commemorate the end of slavery that Black Americans have celebrated since the late 1800s, and in the middle of Pride Month, said Guillermo Creamer Jr., an alumnus of the Nativity School who now serves as one of its associate trustees.

Describing the bishop’s public order as “theatrics,” he asked: “Why now?”

The public nature of the order is “very telling to the true motive of this,” Mr. Creamer said.

Ray Delisle, a spokesman for the Diocese of Worcester, said in a statement that the bishop had waited to issue the order until the school year was over.

The decree’s language, Mr. Delisle added, “affirms our responsibility to love everyone regardless of race.”

The implications for the school do not appear to be severe, Mr. Creamer said. All of its funding comes from donors and not from the diocese, and its school operations are independent of the church, according to its website.

“As a multicultural school, the flags represent the inclusion and respect of all people,” Mr. McKenney wrote in his letter. “These flags simply state that all are welcome at Nativity and this value of inclusion is rooted in Catholic teaching.”

It is unclear how the appeals process will play out. In a similar case from 2019, the Archdiocese of Indianapolis told a Jesuit preparatory school that it would no longer be recognized as Catholic because of its refusal to fire a teacher who was in a same-sex marriage.

That case was appealed to the Vatican, which has still not made a decision, said Sandra Yocum, a professor of faith and culture at the University of Dayton in Ohio.

“This doesn’t happen too often probably because many Catholic schools don’t necessarily fly those particular flags,” she said.

For those that do, though, it’s unlikely that a similar clash will occur, she said.

“I don’t think it’s a thing that most bishops would want to seek to do,” Professor Yocum said, because it would draw negative attention.

Still, Mr. Creamer said he feared Bishop McManus’s order would lead to bishops taking similar measures in other parts of the country.

“At the end of the day, Jesus was reaching out to marginalized people,” he said. “And this is an attack on a marginalized group.”