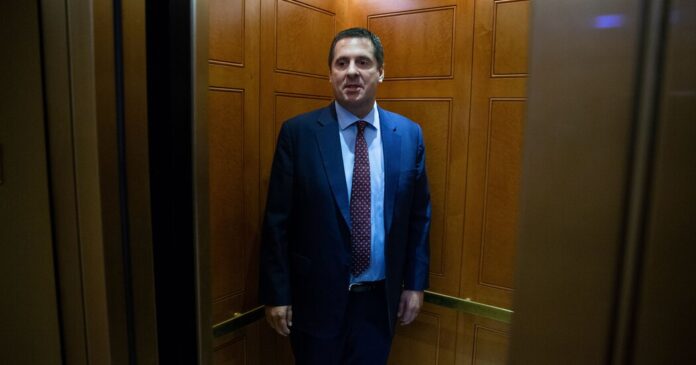 WASHINGTON — Newly disclosed documents have cleared up a mystery that arose in May 2021, after it came to light that the Justice Department under President Donald J. Trump had secretly obtained a grand jury subpoena seeking to unmask the person behind a Twitter account dedicated to mocking a political ally.

Twitter executives fought the subpoena and a related gag order, suggesting that the effort might be a politicized abuse of power to retaliate against a critic of a Trump ally, Devin Nunes, a representative of California at the time. The Justice Department under the Biden administration then withdrew the subpoena. While the incident attracted attention after court files about it were unsealed in May 2021, much remained murky.

The newly disclosed documents show what happened. In short, it was about bumbling police work — not a politicized abuse of power. In requesting a subpoena, the Capitol Police mistakenly identified which Twitter account had posted a threatening message, and prosecutors did not verify the claim.

This information comes from two separate sets of department emails that two watchdog groups, National Security Counselors and Citizens for Responsibility and Ethics in Washington, obtained under the Freedom of Information Act.

In a direct message on Twitter, the user of the account that had been mistakenly targeted, @NunesAlt, who remains anonymous, expressed exasperation.

“I guess the first question would be, didn’t anyone get a screenshot?” the user wrote, adding: “Anonymous speech is free speech. Unmasking anonymous activists puts those activists’ lives in danger. The degree of recklessness and disregard for the safety of those affected is inexcusable.”

The documents also show that some Department of Justice officials were confused about what had happened, while others were frustrated by the suspicions.

“Regardless of administrations, DOJ does not issue subpoenas targeting individuals ‘engaged in political commentary protected by the First Amendment,’” Ken Kohl, a senior career prosecutor, wrote in a May 2021 email quoting an article’s paraphrase of a Twitter court filing.

The matter traced back to Oct. 27, 2020, when an unidentified Twitter user responded to @NunesAlt by referring to the Senate Republican leader: “KILL MITCH MCCONNELL.”

At the time, many liberals were angry at Mr. McConnell for pushing through a Supreme Court nominee, Justice Amy Coney Barrett, just before the presidential election. In early 2016, Mr. McConnell had blocked a vote on President Barack Obama’s pick to fill a vacancy on the court, citing the fact that it was an election year.

The Capitol Police opened an investigation. An analyst asked the office of the U.S. attorney for the District of Columbia to subpoena Twitter for the identity of the person who issued the threat. But the analyst erroneously identified the @NunesAlt account as the author of the threatening tweet, which had been deleted at some point after posting.

Prosecutors sent a subpoena to Twitter the next month. While the company routinely cooperates with such demands, it fought this one: In a court filing, it noted that Mr. Nunes had pursued a series of lawsuits to try to unmask pseudonymous critics on social media, including an account that purported to be his cow and @NunesAlt.

When Twitter sought to learn the basis of the subpoena, prosecutors were vague, saying only that it was part of an investigation into a threat. Then, in March 2021, the department withdrew it.

Behind the scenes, the new files show, Twitter’s resistance had spurred a closer look. In a March 2021 email, a prosecutor conveyed that a Capitol Police officer “had made a mistake and it was a different account” that had posted the threatening message.

“Are we then going to withdraw this subpoena?” a colleague responded minutes later.

The files also show that the Capitol Police suspended the investigation because months had passed and the account that actually made the threat had become inactive. But, adding to the confusion, the agency’s press office told The Times in May 2021 that its investigation remained open even though it was no longer scrutinizing the @NunesAlt account.

In response to that article, another email shows, a Capitol Police agent planned to reach out to the press office “to see if someone there is operating under a misunderstanding.”