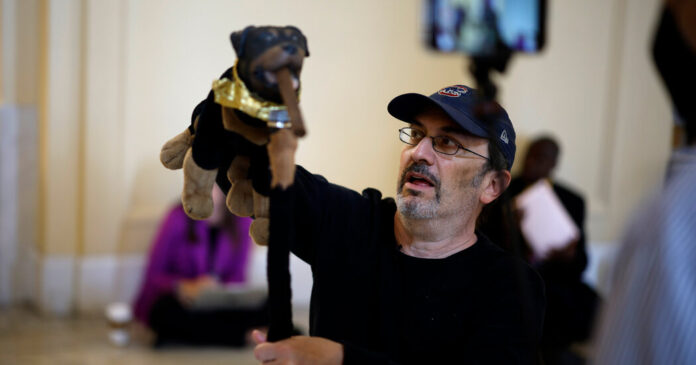 The police Thursday night arrested seven people at the United States Capitol, saying they were unaccompanied and lacked proper identification at a time when the building was closed to visitors.

The group was part of a production team that was at the Capitol building Wednesday and Thursday to record interviews for a comedy segment featuring Triumph the Insult Comic Dog, a barb-spewing canine puppet, for “The Late Show With Stephen Colbert,” according to a statement from CBS.

The United States Capitol Police received a call around 8:30 p.m. Thursday about a disturbance in the Longworth House Office Building, the authorities said Friday. Officers saw seven people who did not have Congressional identification and were unescorted in a sixth-floor hallway, they said.

The Capitol Police said the group had been told to leave the building earlier in the day. Group members were charged with unlawful entry.

“This is an active investigation, and may result in additional criminal charges after consultation with the U.S. attorney,” a statement from Capitol Police said.

Congress has been holding hearings into the Jan. 6, 2021, attack on the building, when supporters of President Donald J. Trump violently stormed the complex.

In a statement released after Thursday’s arrests, CBS said the interviews at the Capitol had been authorized and prearranged through Congressional aides of the members who were interviewed.

“After leaving the members’ offices on their last interview of the day, the production team stayed to film stand-ups and other final comedy elements in the halls when they were detained by Capitol Police,” the statement said.

The names of the group members were not released by the Capitol Police or CBS. The U.S. attorney for the District of Columbia could not immediately be reached late Friday to discuss the arrests.